By John Riley on October 3, 2018 @JohnAndresRiley 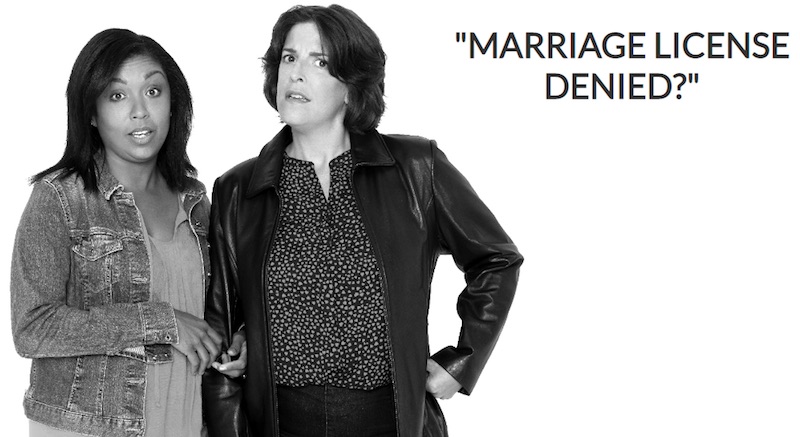 The campaign, titled “No Excuse,” is intended to protest the push for religious exemption laws that argue that a person’s personal opposition to homosexuality, transgenderism, or same-sex marriage trumps the ability of LGBTQ people to access public accommodations, government services, or even publicly-shared facilities.

The first set of billboards were unveiled this week at high-traffic locations in San Francisco, Los Angeles, and New York City, and will be on display until Oct. 28.

“By placing these billboards on some of the busiest streets in some of the country’s biggest cities, we want to start a national conversation among decent, fair-minded people who don’t think religion should be used to bully our neighbors,” Angelo Ragaza, Lambda Legal’s Director of Marketing and Editorial, said in a statement. “We want to remind our communities, especially in this political climate, that there is a culture war being waged by evangelical extremists with LGBT people in its crosshairs. We’re on the front lines, fighting efforts to enshrine discrimination into law. We must be more vigilant than ever.”

Religious exemptions have become much more of an issue since the legalization of marriage equality as part of the Supreme Court’s Obergefell decision, beginning with the refusal of county clerks to certify or issue marriage licenses to same-sex couples.

Perhaps most infamously, Kentucky’s Kim Davis went to jail for contempt of court for refusing to obey a judge’s order to allow her subordinates to issue marriage licenses to same-sex couples. One of the billboards even alludes to that situation, reading: “Marriage License Denied?”

Another lawsuit involving religious exemptions that has made national headlines was the Masterpiece Cakeshop case, in which a baker refused to bake or sell a cake to a same-sex couple because of his personal opposition to marriage equality.

“No Excuse” campaign seeks to start conversations about efforts to deny services to LGBTQ peopleOther instances include a case out of Hawaii where a lesbian couple was turned away from a bed and breakfast, and multiple instances in which cab or Uber drivers have kicked same-sex couples out of their cars or, in one infamous incident in Houston, left a gay couple stranded on the side of the road because they showed affection by kissing one another.

The latter two situations are referenced in two separate billboards that are part of the campaign, one which says: “We’re a Couple, We Don’t Want Twin Beds,” and the other, which reads: “Don’t Do That in My Cab.”

“We are seeing an alarming increase in extreme religion-based arguments claiming all sorts of people and businesses are exempt from the rules protecting everyone from discrimination, making those arguments into weapons in a crusade against the LGBTQ community,” Jenny Pizer, the law and policy director at Lambda Legal, said in a statement.

“Freedom of religion is a core constitutional value of this country but that freedom isn’t, and has never been, a license to harm other people,” Pizer added. “It 100 percent guarantees freedom of belief, but not freedom to discriminate against others when conducting a business, providing a government function, or otherwise engaging with the general public.”

John Riley is the local news reporter for Metro Weekly. He can be reached at jriley@metroweekly.com
← Previous Story Catholic Church fires minister after he liked a Facebook post about gay marriage
Next Story → Victory Fund has backed 272 candidates this November in hopes of generating a “Rainbow Wave”