Subtle and austere, the Washington National Opera’s co-production (with The Atlanta Opera, among others) of Verdi’s La traviata (

) has the mood of a fever on a bleak, autumnal day. There is a dream-like quality, the lighting by turns livid and leached with quiet reminders of illness and death appearing in silent commentary: a scattering of old leaves blown in through an open kitchen door; casino tables wheeled as somberly as hospital beds; windows offering views of misty funereal days or dark nights.

It’s a messaging that is not only appealingly grim (for those who like their operas gloomy), but a kind that fits well with director Francesca Zambello’s decision to interpret this oft-staged classic largely in flashback. As fatally consumptive heroine Violetta recalls her one, last chance for true love, she moves from hospital bed to glamorous Parisian parties and back again, all colored by her knowledge that death is near. It’s not just a newish way to tell the story, it also serves as reminder that we all live with such potentials — that our vigorous lives may suddenly go quiet with illness or death. It’s a theme that develops even more potently — and poignantly — later, as Violetta realizes in a near-final aria that even greatest love cannot save us or those we love.

If the overarching mood and themes are a powerful match with Verdi’s enduringly haunting score, not everything else works quite as well.

But first, more of the good news. Carrying much of the evening is a genuinely convincing Violetta in the form of soprano Venera Gimadieva, very much looking the part. Offering her without the usual overly mannered fanfare, Gimadieva expresses a woman of warmth, complexity and personality. With her illness taking hold, what Gimadieva captures particularly well is Violetta’s carefully hidden vulnerability — her distrust of the men who have seen her as a diversion and her craving for a true and enduring love. When the ardent Alfredo Germont makes himself known during a soiree and declares that he has loved her from afar, the transformation is palpable: this is her lifeboat. But as events with Alfredo unfold, Gimadieva continues to capture an even more interesting nuance — Violetta’s inner battle between her instinctive independence and the demands of a certain strata of 19th century society. It’s a shading that keeps the portrayal away from doe-eyed martyrdom and closer to a genuine, grownup pathos.

Of course, much is delivered through Gimadieva’s expressive singing, a soprano that, even if it isn’t 100 percent reliable, can deliver some spine-tingling beauty and power. If she sings a tad too languorously for the requirements of the first act (though it almost works as a means to show her independence of spirit), she comes far more into her own in the second and third acts, where she meets Verdi’s call for a fuller and more soulful sound.

Matching her in charisma is a stony-faced Lucas Meachem as Alfredo’s unyielding father, Giorgio Germont. Descending on the lovers’ hideaway determined to convince Violetta to end a love affair that is bringing disgrace on the family, Germont is asking the world of this dying woman. If some might find him a tad static, the choice to keep the harrumphing and remonstrating to a minimum has a genuine benefit: we listen to him but we stay focused on Violetta and her struggle to come to terms with what she must do. Besides, in Meachem’s gorgeous, stentorian baritone, we hear everything there is to know: his family comes first, even if he shows an inkling of respect for Violetta.

Though he sings with a passionate gusto — almost too much of it at times — Joshua Guerrero’s Alfredo never quite finds the chemistry with Violetta and this seriously dampens at least some of the pathos. When, in her final moments, the desperately ill Violetta suddenly cries out that she wants to live, it is because she is so madly in love with Alfredo. Though, to her credit, Gimadieva carries this moment single-handedly, a greater sense of the enduring passion between the two lovers should have been generated earlier. Of course, matters are not helped by the fact that Alfredo is anything but sympathetic to 21st century eyes — though he starts utterly besotted, he becomes abusive when spurned and then desperately lovey again at the end. Almost as unfairly, he has also been given a hairstyle here that does its level best to disguise his good looks. But such are the challenges, and Guerrero never quite finds a way to be fully worthy of this richly wonderful Violetta.

Other standouts here are Alexandria Shiner as Violetta’s maid Annina, for a soprano that rings like a beautiful, delicate bell, and Deborah Nansteel as Violetta’s compassionate friend Flora Bervoix, who both commands a stage and delivers her mezzo-soprano with confidence. Timothy J. Bruno plays Doctor Grenvil convincingly and offers a small sampling of an attractive bass. Finally, if conductor Renato Palumbo allows a few uneven moments, lovers of this opera will come away fully sated.

If not every component of this production works, its overarching concept most certainly does. This is a classic done soberly, subtly, and with Verdi’s most heartfelt moments delivered with touching clarity. 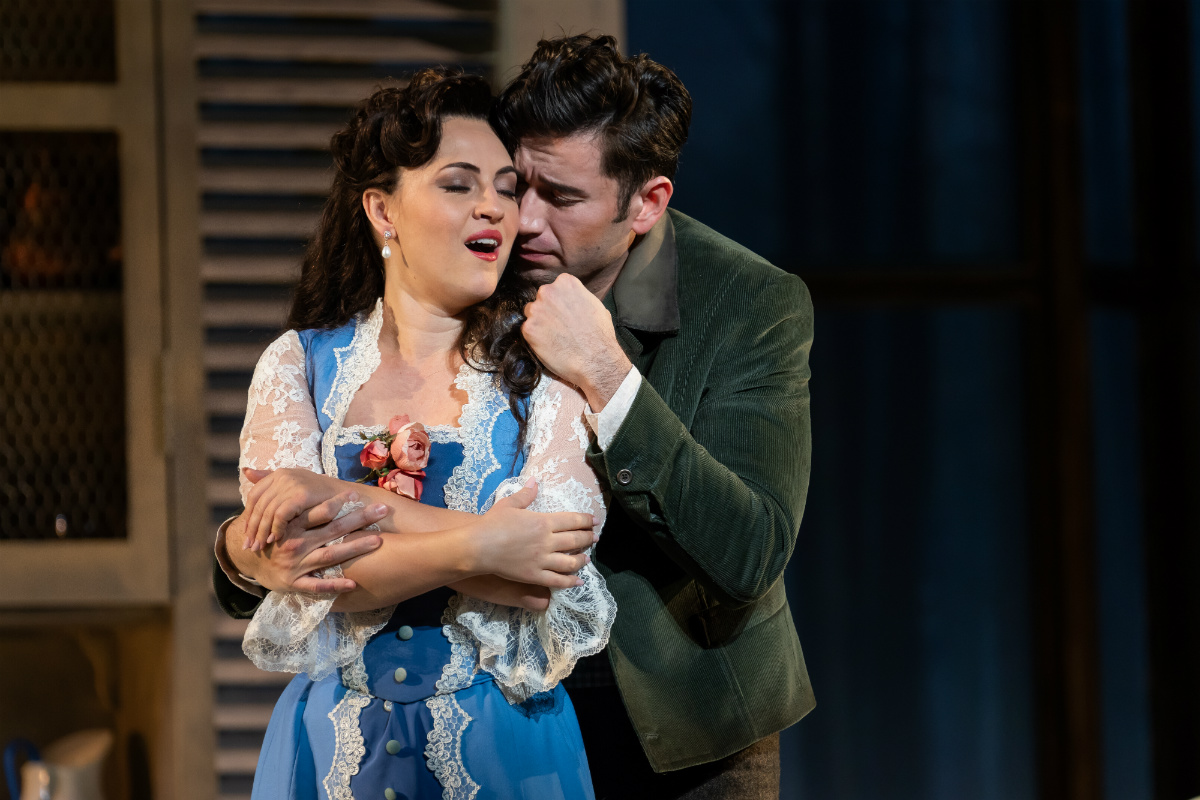