Shayla S. Simmons pretty much steals the show as the lead in Constellation's glossy, glitzy "Aida" 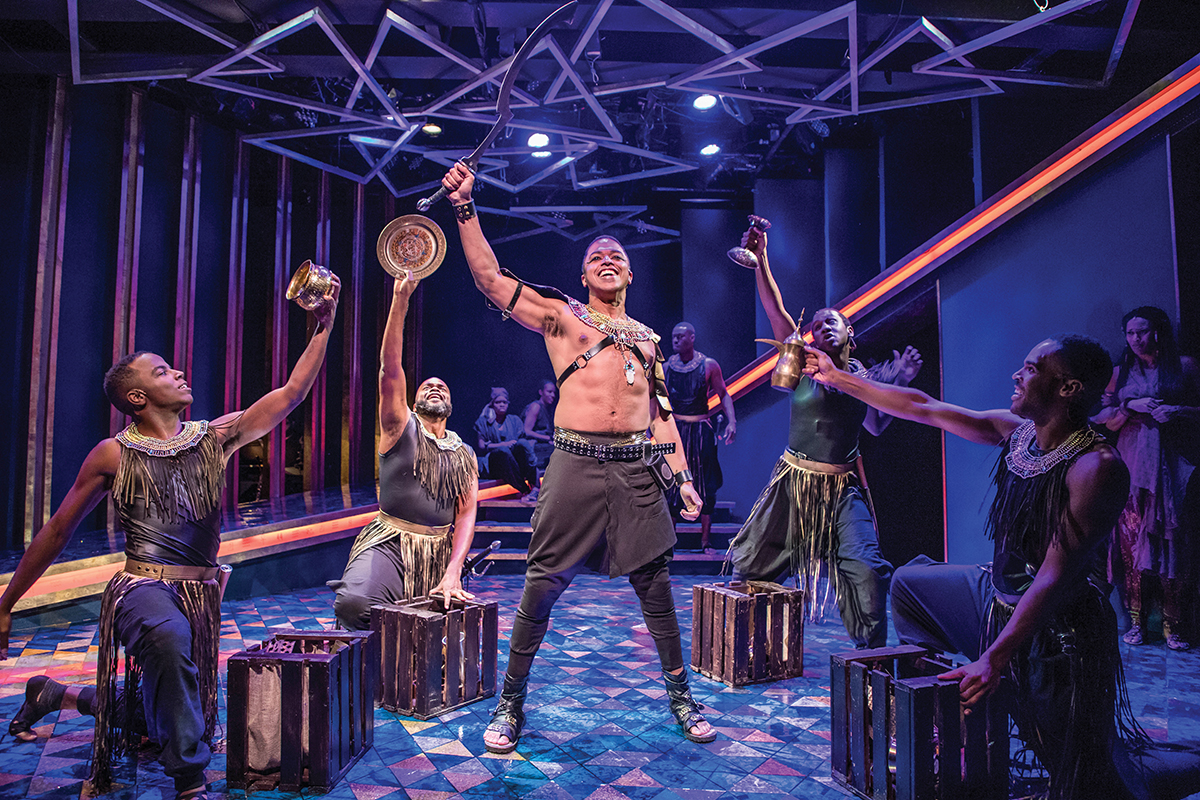 Before a note has been sung in Michael J. Bobbitt’s bustling new production of Aida at Constellation Theatre, A.J. Guban’s glossy scenery has set a ripe tone for the pop-musical tour of ancient Egypt. It’s a great-looking set — a neon-lit, three-sided stage evoking a pyramid chamber built inside a ’70s Vegas casino. It seems just the right platform for an intimate rendering of Elton John and Tim Rice’s Tony-winning show.

But, despite that initial buzz of visual pizzazz, Aida (★★½) gets off to a sleepy start with two numbers introducing the love story of the Nubian princess Aida and the Egyptian army captain Radames, who captures her in war. Though Aida conceals her royal lineage from her captors for her own safety, she cannot hide her unbreakable spirit. That indomitability resides fully in the confident voice of Shayla S. Simmons, whose portrayal of the headstrong highness Aida is this production’s most compelling element.

It’s when the princess first speaks, pronouncing her name proudly, that the show wakes up. Of course, Radames notices, and, as the lovestruck captain, Jobari Parker-Namdar carries off the warrior’s awakening with clarity and subtlety. Moved by Aida’s strength of will, even as she submits to becoming a slave of Egypt, Radames shows her his version of mercy. He saves her from a life toiling in Egypt’s copper mines by gifting her to his betrothed, the pharaoh’s daughter Amneris, for whom Aida will serve as one of several handmaidens.

Amneris thus becomes the unwitting third face of a love triangle between her fiancé of nine years, and one of the slaves she bosses around her chambers. As the petulant Egyptian princess, Chani Wereley captures her naïve but entitled attitude, layered with a modern, comic appeal. Wereley’s charisma as a performer sells her take on Amneris’ songs at least as much as her singing does. The same could be said of Da’Von Moody’s charming performance as the Nubian Mereb.

The songs, in general, are passably sung. With the exception of the resounding Ashley Johnson-Moore as Nubian slave Nehebka, the singing rarely strikes a special chord. Simmons, a powerhouse when enacting the drama of Aida’s captivity and reticent romance, doesn’t offer a powerful delivery of the music. Her emotions are sure and persuasive, but the songs proceed like beats in the story, rather than high-impact moments. The few really thrilling musical moments arise out of the chemistry between Simmons and Parker on duets like their first act ballad “Enchantment Passing Through,” and later, in the aching “Elaborate Lives.”

Musical director and bandleader Walter “Bobby” McCoy ably interprets Elton John’s signature banging-piano sound, most noticeable in “Elaborate Lives,” and also simmering underneath the gospel realness of “The Gods Love Nubia.” John and Rice’s score, dabbling in different styles — including the reggae-ska of “Another Pyramid,” and the bouncy doo-wop of “My Strongest Suit” — might not generate many showstoppers, but the songs do channel the story fluidly, in concert with the show’s uncomplicated book. 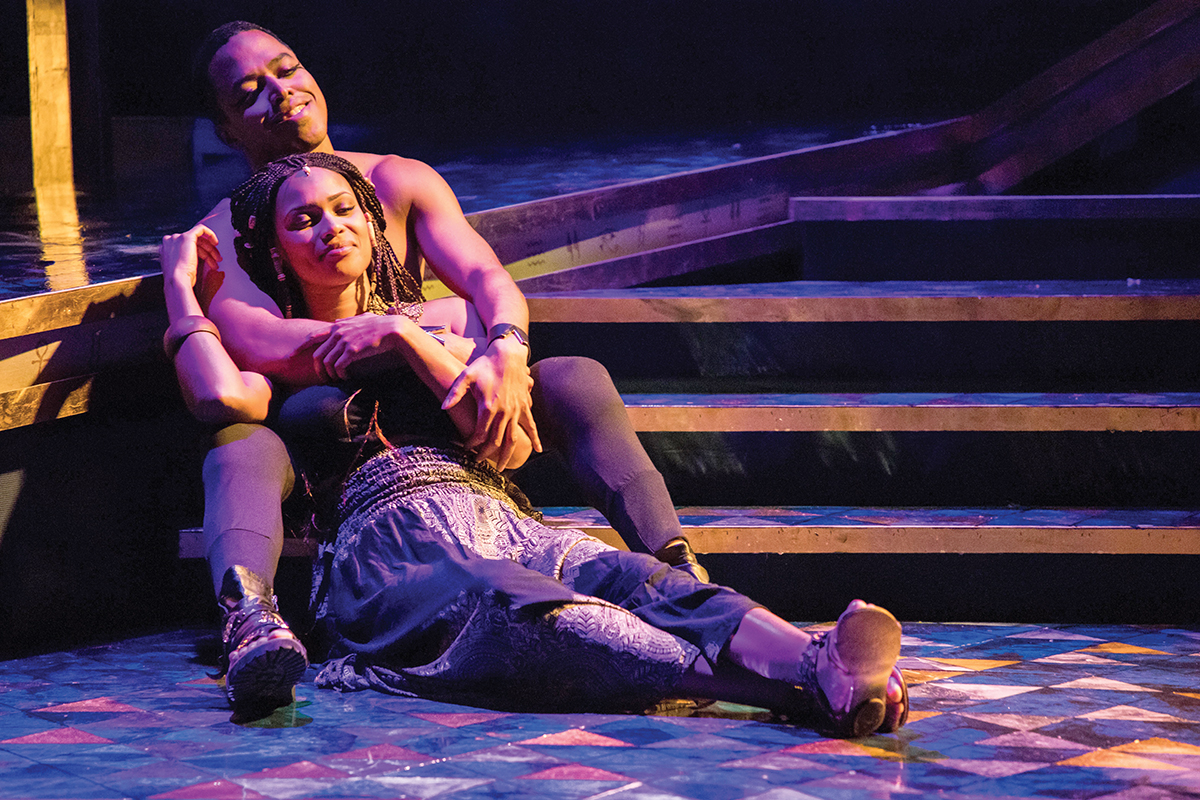 That script adapts the story of Verdi’s opera without adding much in the way of humor or insight, especially considering the esteemed writers involved: Linda Woolverton, Robert Falls, and David Henry Hwang. But the script is well-served by Bobbitt’s direction, and Simmons’ lead performance, which emphasize Aida’s dilemma in her conflicting desires to be a leader to her fellow countrymen held in bondage, and to indulge her desire for Radames.

Where this production really is not well-served is by the awkward choreography and movement, be it in the musical numbers and interludes, or in the unconvincing fight sequences. Choreographer Tony Thomas II sends choruses of sentinels and slave girls voguing and shimmying across the stage looking more like Solid Gold dancers than players in an epic love story. The costumes by Kenann M. Quander sometimes exacerbate the TV variety show effect, although the shimmering gold and silver, Wakanda-meets-Egyptian wardrobe, augmented by custom jewelry, works within Bobbitt’s overall glitzy aesthetic for the tragic love affair.

Amidst the glamour, and Guban’s ace lighting design, the production hits several stunning visual tableaux. That glamour can be pleasantly diverting, or just distracting. In one corner, Simmons is acting her heart out as a woman in love and in captivity, surviving knowing she’s one look, gesture, or irresponsible word away from being found out — or worse, executed. In the other corner, a cast of Cher’s backup dancers are rolling around in lamé scarves. The two halves don’t fit, but a half-moving story seeps out just the same.

André Hereford covers arts and entertainment for Metro Weekly. He can be reached at ahereford@metroweekly.com. Follow him on Twitter at @here4andre.
← Previous Story Theater Review: Shakespeare Theatre’s “The Comedy of Errors”
Next Story → Theater Review: Synetic’s eerie, astounding “Sleepy Hollow”