By John Riley on November 27, 2018 @JohnAndresRiley 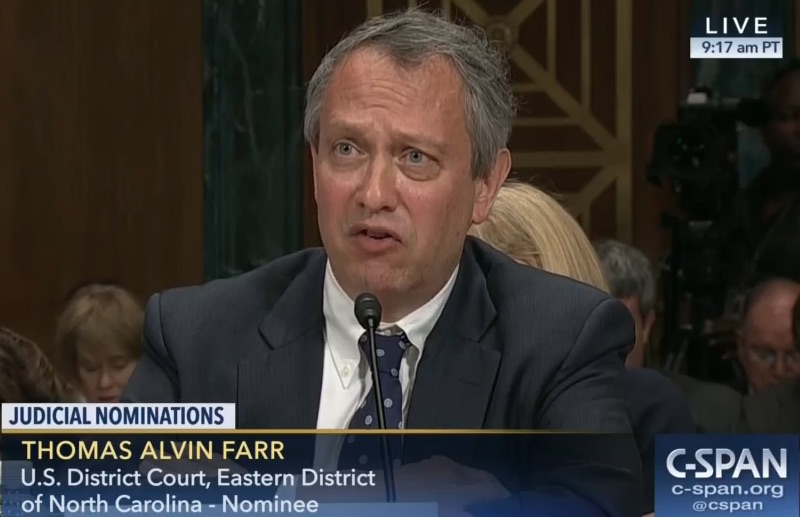 The Leadership Conference on Civil and Human Rights is once again urging the U.S. Senate to reject the nominations of two Trump federal court nominees.

Due to Republican control of the U.S. Senate, the pleas of civil rights groups like The Leadership Conference have generally fallen on deaf ears, as GOP leaders — notably Senate Judiciary Chairman Chuck Grassley and Senate Majority Leader Mitch McConnell — rush to stack courts with as many conservative judges as possible.

Nonetheless, The Leadership Conference decided to register its objections to the nominations of Thomas Farr to the U.S. District Court for the Eastern District of North Carolina and Jonathan Kobes to the 8th U.S. Court of Appeals, sending letters to senators’ offices outlining their concerns over the two men’s history of opposing civil rights, voting rights, and LGBTQ rights.

The organization’s chief objection to Farr has to deal with his defense of a North Carolina photo ID law (which also limited or eliminated early and same-day voter registration and voting).

The law was passed after the U.S. Supreme Court overturned Section 5 of the Voting Rights Act, which previously required jurisdictions with a history of voter discrimination, like North Carolina, to pre-clear voting changes with the U.S. Department of Justice.

The law was eventually struck down by the 4th U.S. Circuit Court of Appeals, which found that provisions of the law “target African Americans with almost surgical precision,” and described the law as “the most restrictive voting law North Carolina has seen since the era of Jim Crow.”

Yet Farr appealed the decision to the Supreme Court, arguing that the 4th Circuit’s characterization of the law was “ludicrous” and accusing the appeals court of “insult[ing] the people of North Carolina and their elected representatives by convicting them of abject racism.” The Supreme Court eventually denied Farr’s appeal.

The Leadership Conference also notes that Farr defended North Carolina maps gerrymandering congressional and state legislative districts, despite the fact that they were struck down by courts because they used race as “the predominant factor” in drawing district lines.

And it expressed concern over Farr’s defense of North Carolina when the state was sued for violating the National Voter Registration Act, and his defense of former Sen. Jesse Helms’ 1990 Senate campaign when it was flagged by the Justice Department for sending postcards to African-American voters falsely stating they could be thrown in jail for up to five years if they tried to vote in a precinct in which they had lived for fewer than 30 days.

The organization has also flagged Farr for his hostility to workers’ unions, his support of a North Carolina law that abolished the right to bring discrimination-based wrongful discharge claims in state court, and his comparison of the Affordable Care Act to the much-reviled Supreme Court decisions in Plessy v. Ferguson and Dred Scott.

Vanita Gupta, the president and CEO of The Leadership Conference, noted that Farr’s nomination may be particularly offensive to some African-Americans because Republicans blocked two African-American judges nominated by President Obama for the vacancy.

LGBTQ legal organization Lambda Legal previously condemned McConnell’s decision to schedule a vote on Farr’s nomination, particularly in light of complaints of voter suppression and disenfranchisement in various states during the 2018 midterm elections.

“Thomas Farr has spent his career defending discriminatory voter ID laws that target African Americans ‘with almost surgical precision,'” Sharon McGowan, legal director and chief strategy officer at Lambda Legal, said in a statement. “Access to the ballot box should be open to all, regardless of race, sexual orientation, or gender identity. Thomas Farr’s attempts to infringe upon and thwart the right to vote for African Americans in North Carolina is a threat to everyone’s democracy. We urge each and every Senator to reject this nomination.” 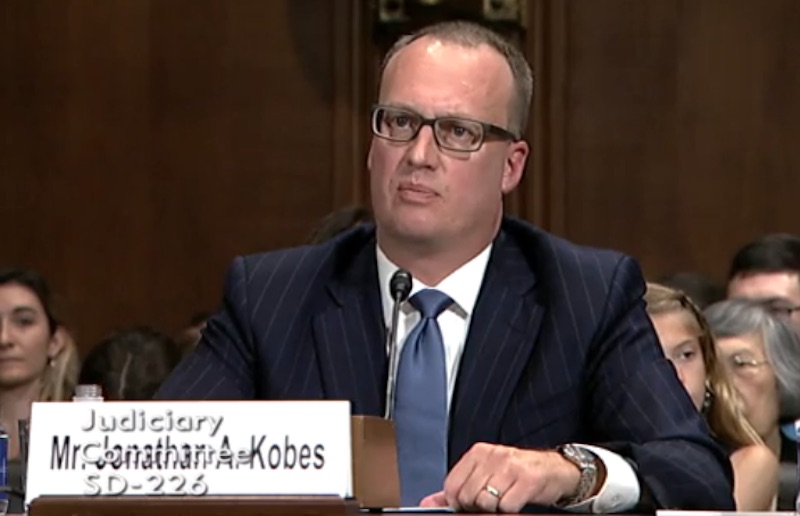 Kobes, the General Counsel for Sen. Mike Rounds (R-S.D.), was rated “Not Qualified” by the independent and nonpartisan American Bar Association’s Standing Committee on the Federal Judiciary. That makes him the sixth Trump judicial nominee to be rated Not Qualified either unanimously or by a substantial majority of the committee. Gupta also noted that Kobes’ ABA rating should have been considered prior to his receiving a confirmation hearing in August, accusing Grassley, as Judiciary Chairman, of a “partisan and relentless effort to steamroll Trump judicial nominees through the committee.”

Specifically, the ABA noted that Kobes’s career consisted primarily as working as a Senate staffer and in-house counsel, saying he lacked the writing and professional experience that’s generally required to sit on an appeals court.

“Mr. Kobes has neither the requisite experience nor evidence of his ability to fulfill the scholarly writing required of a United States Circuit Court Judge,” the ABA wrote. “[H]e was unable to provide sufficient writing samples of the caliber required to satisfy Committee members that he was capable of doing the work of a United States Circuit Court Judge. … None of the writing that we received is reflective of complex legal analysis, knowledge of the law, or ability to write about complex matters in a clear and cogent manner.”

The Leadership Conference also noted that Kobes has demonstrated a significant amount of anti-LGBTQ animus. In 2012, Kobes served on the board of Bethany Christian Services, a foster care agency that refuses to place children with families led by same-sex couples. Under questioning from U.S. Sen. Kamala Harris (D-Calif.), Kobes admitted he knew of Bethany’s policy when he served on the board.

In addition, Kobes expressed skepticism about LGBTQ rights in an interview he gave to the Dutch newspaper Reformatorisch Dagblad. In the interview, Kobes questioned whether the American people were ready to accept the legalization of same-sex marriage or the idea of allowing transgender students to be treated according to their gender identity in school.

Kobes has also defended, on a pro bono basis, a law requiring abortion providers to give pregnant women erroneous information to dissuade those women from pursuing abortions. He was a member of the Federalist Society, a conservative legal organization that seeks to stack the courts with judges who embrace an “originalist” perspective on legal issues, and worked on several Republican political campaigns, raising concerns about his ability to be impartial regarding cases that come before the 8th Circuit.

“Farr has spent his legal career restricting voting rights, upholding employment discrimination, and defending the policies of known white supremacists. Kobes, who was rated Not Qualified by the American Bar Association, has fought reproductive freedom and LGBTQ equality his entire career,” Kristen Voorhees, communications manager for The Leadership Conference, said in a statement. “And still, Trump is pushing for both of them to receive  lifetime appointments to the federal bench. We urge the Senate to reject the nominations of both Farr and Kobes for the sake of civil and human rights protection for all.”

John Riley is the local news reporter for Metro Weekly. He can be reached at jriley@metroweekly.com
← Previous Story Shawn Mendes: I feel the need to “prove” I’m not gay
Next Story → Anti-gay U.S. Rep. Mia Love concedes defeat in Utah