By John Riley on November 30, 2018 @JohnAndresRiley 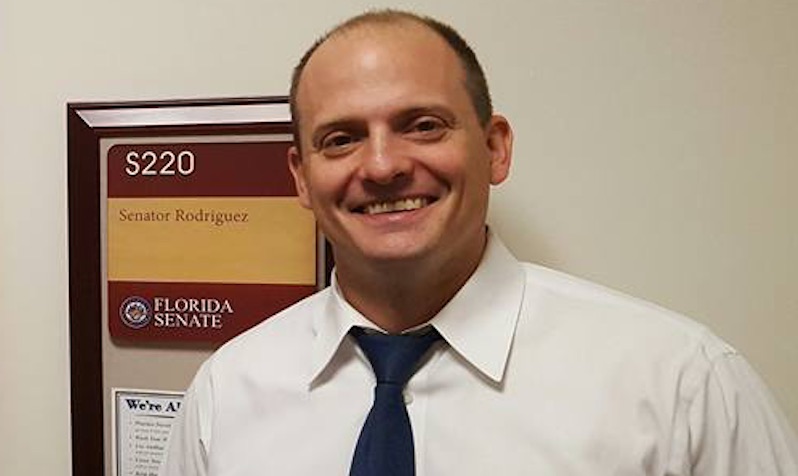 A Democratic state senator from Florida has filed a bill seeking to ban conversion therapy on minors.

Those who do subject children to conversion therapy while acting in a professional capacity could be subject to discipline by both the department of health and the governing board of their counseling or medical association, up to and including the loss of their license to practice.

The bill does not apply to clergy who may be licensed therapists but are acting in the role of a religious advisor, and does not penalize those who seek to provide support to youth struggling with their LGBTQ identity.

“More importantly, the practice we seek to ban is not therapy,” Rodriguez added. “The long-term, even lethal, damage it does to youth is well documented. If you’re going to be a licensed practitioner in Florida, refraining from harming our youth with this debunked practice should be a basic requirement.”

Rodriguez co-sponsored a similar bill with Rep. Evan Jenne (D-Dania Beach) last year. Unfortunately, the Republican-led Florida Legislature has continued to block such bills, just as it has other pro-LGBTQ legislation.

But a poll conducted by Gravis Marketing in the spring of 2017 showed that 71% of Floridians believe that therapy aimed at changing a person’s sexual orientation should be illegal for minors.

Currently, 14 states ban conversion therapy either by statute or through insurance regulations that refuse to reimburse therapists who engage in the practice.

Several dozen municipalities throughout the country — including at least 20 in Florida — have also banned the practice in light of the failure of state legislators to pass statewide bans like the one called for by Rodriguez.

The conservative legal organization Liberty Counsel is currently suing to overturn the city of Tampa’s ban on conversion therapy, and has challenged laws passed in Palm Beach County and the city of Boca Raton, claiming that bans on conversion therapy challenge their right to publicly profess religious beliefs opposing homosexuality, and therefore violate their First Amendment rights to freedom of religion and freedom of speech.

Rodriguez’s bill has already drawn support from both Equality Florida and The Trevor Project, a national organization working to combat high rates of suicidal ideation among LGBTQ youth.

“The Trevor Project is deeply invested in ending conversion therapy in every state because we know youth who experience rejection from their family are more than 8 times more likely to attempt suicide than youth from accepting families,” Amit Paley, CEO and executive director of The Trevor Project, said in a statement. “Conversion therapy is a profoundly dangerous form of rejection with no basis in medicine or science. Unless lawmakers act to end the practice in every state, countless LGBTQ youth will be subjected to forms of conversion therapy in the next few years.”

“Conversion therapy is a deceptive and utterly discredited practice that targets some of the most vulnerable in our state — LGBTQ young people,” Jon Harris Maurer, the public policy director for Equality Florida, said in a statement. “It’s time to put an end this dangerous abuse disguised as medical treatment.”

John Riley is the local news reporter for Metro Weekly. He can be reached at jriley@metroweekly.com
← Previous Story House Democrats select Nancy Pelosi as their next Speaker in closed caucus
Next Story → Advocates release “roadmap” aimed at ending HIV epidemic by 2025