Home / News + Politics / Local / LGBTQ Candidate Spotlight: Ryan Tauriainen hopes voters will back an educator for a State Board of Education seat

LGBTQ Candidate Spotlight: Ryan Tauriainen hopes voters will back an educator for a State Board of Education seat

Tauriainen has already faced a negative whisper campaign that referenced his sexuality, but that hasn't deterred him from running

By John Riley on November 1, 2018 @JohnAndresRiley 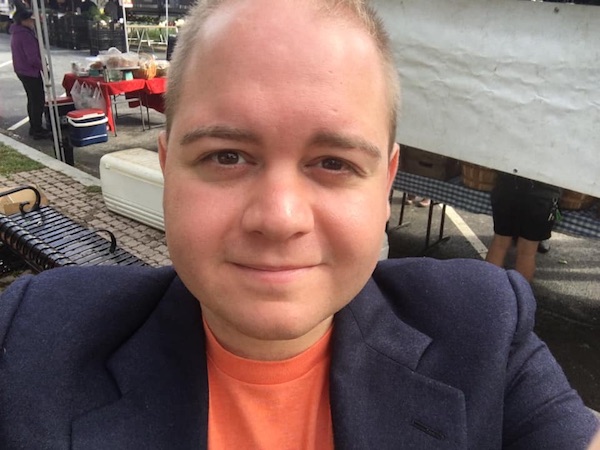 This article is part of a series highlighting local LGBTQ candidates running in the 2018 elections. The opinions and political beliefs expressed in this candidate spotlight do not necessarily reflect those of Metro Weekly, its employees, or its contributors.

It was frustration with the status quo that prompted Ryan Tauriainen to run for the open Ward 4 seat on the D.C. State Board of Education.

“I’ve been an educator in D.C. for almost a decade, as a teacher, as a principal, and now as a district level leader,” he says. “Especially when I was a principal, I was frustrated that there wasn’t a single member of our State Board of Education (SBOE) that had led a D.C. school. There’s actually quite a few members that are not a teacher by trade, period.”

Tauriainen, a 32-year-old Takoma resident who serves as the director of early childhood education at Friendship Public Charter School, wants voters to know more about what the SBOE does — including advising the Office of the State Superintendent and voting on proposals related to curriculum, graduation standards, and teacher performance ratings. And because the issues that the SBOE deals with are highly technical, Tauriainen wants more people with real-world classroom or administrative experience on the board.

“I think the SBOE sometimes attracts people who are not educators by trade for two reasons: some people who are not educators have children who have attended public schools in D.C., so they have an interest at that level, which is valid,” he says. “But I also think that some people see the State Board of Education — not just in D.C. but in many jurisdictions — as a stepping stone to more influential positions, such as perhaps the City Council.

“I think everyone on the board wants to do what’s best for kids, but I think, in some cases, it would be really helpful to have at least one person on the board who has worked with the standards we have in place for teachers and students,” he adds. “I still work in public schools to this day.”

Tauriainen originally made plans to run for the SBOE in 2020, when the Ward 4 seat should have been up for re-election. But the surprise resignation of former SBOE member Lanette Woodruff triggered a special election this year.

Unfortunately for Tauriainen and his fellow candidates, the special election won’t be held on Nov. 6, when most D.C. voters will head to the polls. Because Woodruff didn’t resign until July 31, the special election was pushed to Dec. 4, meaning candidates have to work doubly hard to convince supporters to come out for what is expected to be very low-turnout election.

Still, Tauriainen believes his record and background in public education make him the most qualified candidate.

“I was a principal for four years,” he says, referring to his time heading Appletree Early Learning Public Charter School in Columbia Heights. “The results in my school went from 60% proficiency to over 90%. I had the highest staff satisfaction rate in the entire District of Columbia. The parent satisfaction rate was at an all-time high, and I was the D.C. Principal of the Year in 2016. I have since won five national awards in education as well.”

Tauriainen also supports restoring some of the SBOE’s power. Some D.C. residents may remember with horror the years with a powerful (and highly politicized) school board — before the mayor’s office assumed control — but Tauriainen says that expanding the types of topics that the school board can address without restoring all of the board’s former power might help provide oversight over OSSE and a check on the mayor’s power.

Tauriainen points to the recent scandal that forced former Schools Chancellor Antoine Wilson to resign as an example of how mayoral control may lead to a lack of accountability. In that instance, Wilson’s daughter was allowed to skip the lottery process and obtain a spot at one of the District’s most sought-after high schools.

Returning some limited power back to the board might also encourage residents to pay attention and become more engaged when it comes to SBOE matters, he says. 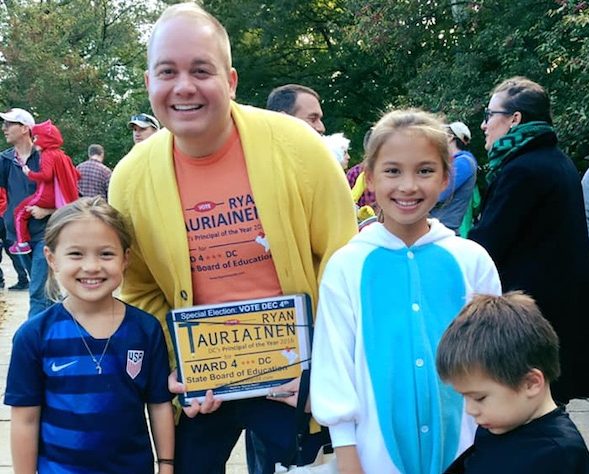 Tauriainen says the decision to run for SBOE is “one of the most difficult things I’ve ever done,” and he’s already encountered the shady side of politics: a whisper campaign against him referencing his sexual orientation.

“I’ve been an out gay man for many years. It’s not something I talk about non-stop, but it’s not something I’d ever deny,” he says. “But I have gotten a glimmer of some latent homophobia. I was talking to a voter who had talked to other candidates, and they said that when they asked ‘Who else is running?’ they brought up my name, and in an interesting way, added, ‘He and his HUSBAND are not native Washingtonians.’

“Why was that pertinent? It was obvious to let you know something in case that would sway your vote,” he says. “Of course, the person who reported that to me was quick to say that they would never not support anyone because of that. They just thought that it was very strange to mention that.

Tauriainen notes that many D.C. voters tend to be skeptical of non-native Washingtonians who run for any office, but he’s hoping his experience and his proven dedication to improving school outcomes for D.C. pupils will help him overcome that prejudice as well.

“It’s a shame when that comes up, because it’s sort of Trump-ian, in way, that if you weren’t born in a place, you don’t belong there,” he says. “But I think one of the reasons why it comes up is some people are afraid that if you weren’t born and raised in Washington, if you didn’t attend D.C. Public Schools, you may not be in it for the right reasons or you may skip out at some point. That couldn’t be further from the truth in my case.

“I’m a person who chose to live in D.C. and it was a very active choice…. I would hope that doesn’t mean that I can never aspire to anything more simply because of where I was born. I purposely chose and sought out to live in the District, I’m a homeowner. This is where I’m going to be for the rest of my life. I’m not going anywhere.”