Oscar Ceville on playing Bronco Internationale: “Thank God I go to the gym”

Oscar Ceville embodies a Lucha Libre legend in Keegan’s unique staging of one of Shakespeare’s most popular comedies. 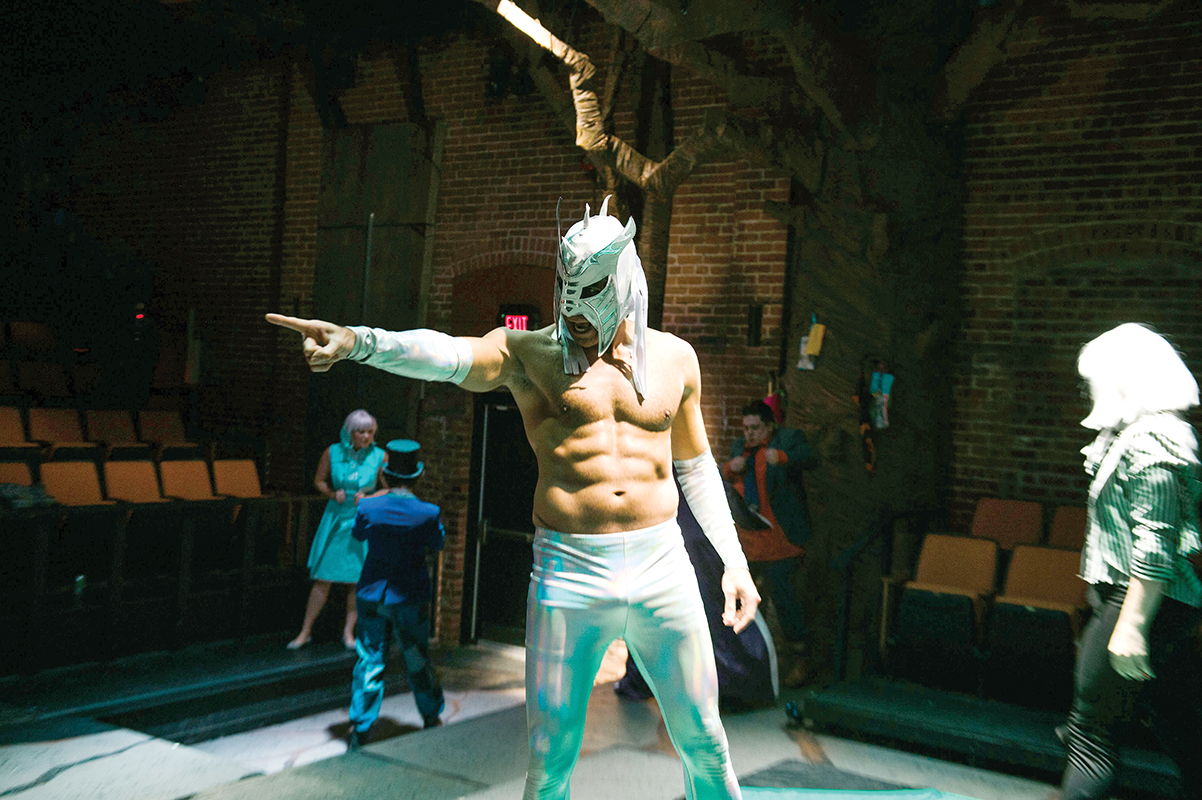 “Doing any show in the round is very challenging, because you have to be aware that you have audiences on all four sides,” says Oscar Ceville, currently appearing in As You Like It at Keegan Theatre. For this musical adaptation of Shakespeare’s beloved comedy, directors Cara Gabriel and Josh Sticklin have abandoned the Church Street Theatre’s traditional proscenium moorings, instead crafted an immersive, four-sided playing arena. The comedy’s familiar wrestling matches have been expanded, reimagined as Lucha Libre, a freestyle form of the sport popularized in Mexico, for which participants don aggressively colored, somewhat menacing masks.

Ceville, long a mainstay of the D.C. theater scene, plays Bronco Internationale. “He’s the champion of the Court and he always wins,” says the openly gay actor. “But then he wrestles Orlando, who is one of the main characters of the play, and loses.” Ceville also fields the less physically demanding role of Adam, Orlando’s manservant, who follows him into the magical forest of Arden. Still, the 46-year-old, Panamanian-born actor gets an adrenaline rush from portraying Bronco, who is based on one of the sport’s living legends, and a founder of the Bronx Wrestling Federation.

“I was surprised when I found out that I was playing Bronco, because I was basically the oldest person in the cast,” says Ceville, who has been featured in productions at GALA, Constellation, and The Shakespeare Theatre Company. “I was like, ‘Oh you’re picking the oldest man in the cast to do this?’ Thank God I go to the gym. I can keep up.”

Thankfully, Ceville hasn’t sustained any serious injuries during the production’s run, apart from “a couple of bruises here and there.” However, he notes that, as a precautionary measure, the cast runs through the fights daily before the start of each show, to “make sure that everybody’s okay, everything’s good, everything’s in place, and we’re ready to do it at the performance.” —Randy Shulman

Randy Shulman is Metro Weekly's Publisher and Editor-in-Chief. He can be reached at rshulman@metroweekly.com.
← Previous Story Jane Lynch brings her “Swingin’ Little Christmas” to DC
Next Story → Theater Review: All Save One at Washington Stage Guild