Corbin Bleu, the High School Musical actor, and runner-up on Season 17 of “Dancing with the Stars,” has long since proved his mettle as an all-around entertainer, with well-received roles on screen and stage. But he impresses anew as a gold standard leading man in Molly Smith’s buoyant, boisterous staging of Cole Porter’s Anything Goes (★★★★) at Arena Stage.

Effortlessly dancing up, down, and around Ken MacDonald’s cruise ship set, Bleu’s dapper, lovesick Billy Crocker, a stowaway aboard the S.S. American, also croons in a Johnny Mathis tenor that was made for pitching woo. Billy carries the Depression-era show’s torch of romance, yearning for his debutante love Hope Harcourt (Lisa Helmi Johanson), who is already engaged to posh Englishman Lord Evelyn Oakleigh (Jimmy Ray Bennett). To win her hand, Billy impulsively hitches a ride on the American, the ship carrying soon-to-be-married Hope and Oakleigh, and Billy’s boss, Elisha Whitney (Thomas Adrian Simpson), among others, to London. Bleu and Johanson don’t burn up the stage with star-crossed desire, but this Billy sells the questionable idea of risking his job, and landing in the ship’s brig, in order to chase somebody else’s fiancée across the Atlantic.

The entire cast has a sterling Cole Porter score at their disposal, kicked off by “I Get a Kick Out of You,” sung by Reno Sweeney (Soara-Joye Ross). A sultry, evangelizing singer, Reno has her eye on Billy, and lets him know with a sincere “You’re the Top.”

Bleu and Ross do an airy Astaire and Rogers spin through Parker Esse’s glorious choreography, and share a scintillating partners-in-crime chemistry. Alas, Reno reads the writing on the wall and keeps her distance. She even does her damndest to help Billy, by peeling Oakleigh away from Hope.

Ross and her bubbly alto serve up a Reno full of moxie, who’s witty and worldly and looks like a million bucks in every one of costume designer Alejo Vietti’s glamorous gowns and pantsuits. Praise is due also to hair and wig designer Charles G. Lapointe for period creations that stay put on Reno and her beautifully in-sync quartet of Angels (Lizz Picini, Kristyn Pope, DeMoya Watson Brown, and Andrea Weinzierl) throughout some bustling musical numbers.

Smith and Esse have the entire cast belting from moving platforms, and dancing down staircases. The effort shows for some, but not Bleu or Bennett, whose Oakleigh is likable enough that a second-act song, “The Gypsy in Me,” risqué in these p.c. times, goes down smoothly. The production also finesses its minor storyline about Chinese stowaways John and Luke (Julio Catano-Yee and Christopher Shin), posing as Christian converts.

Offering a tight rendition of the revised book written for the ’87 Broadway revival, Anything Goes mixes the screwball element of mistaken and assumed identities with a sensual, modern sensibility. The slapstick might go overboard with a few of the passengers on the American — namely gangster Moonface Martin (Stephen DeRosa) and his moll Erma (Maria Rizzo) — but the ease of most everything else reins in the excess.

And, if the production’s breezy air and upbeat tempo stowaway timely messages on acceptance and friendship, that’s just more icing on the cake. The show is definitely a treat. The swag, the songs, the orchestra, the dancing sailors are, as Billy sings, “Easy to Love.” 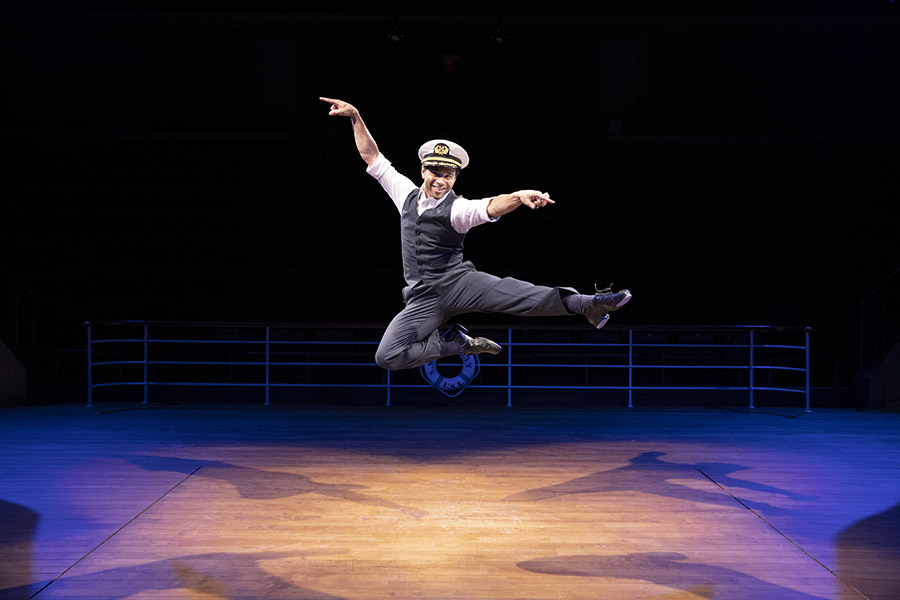