Home / Arts + Entertainment / Stage / Theater Review: As You Like It at Keegan Theatre

Theater Review: As You Like It at Keegan Theatre

"As You Like It" charts a romantic, musical escape to Shakespeare's idyllic forest 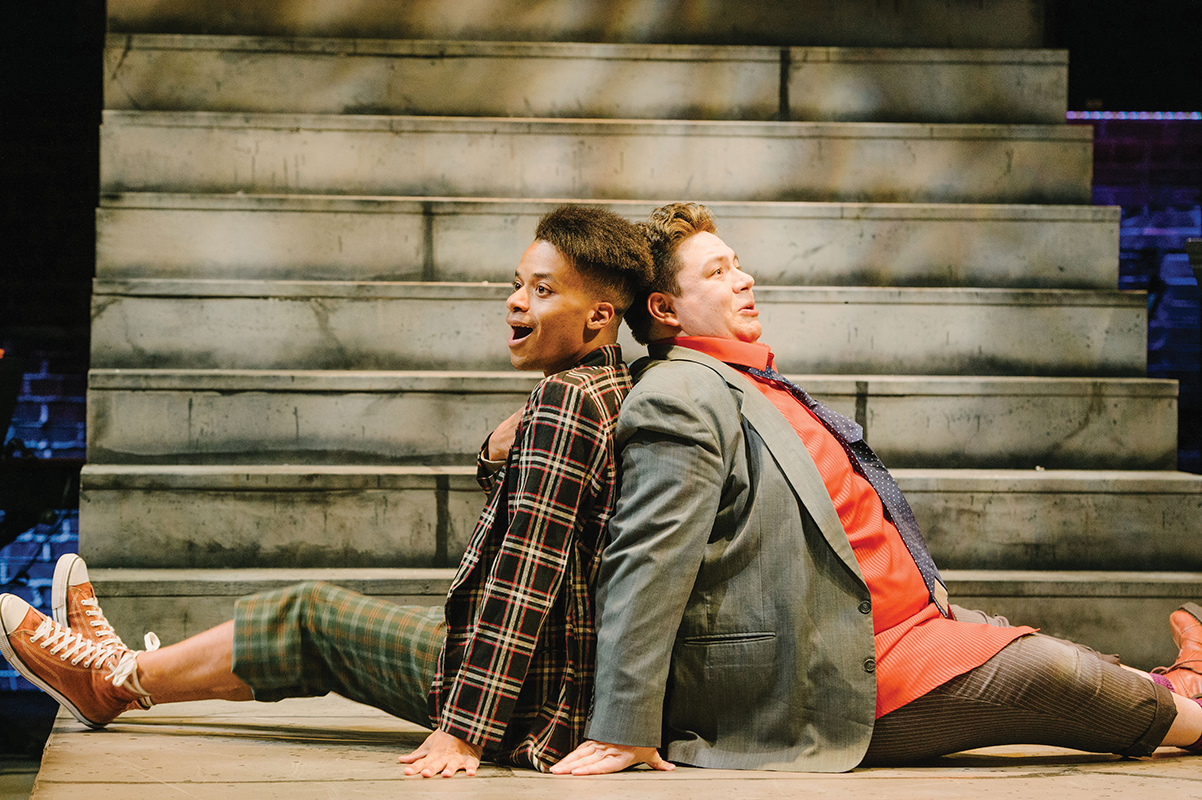 In Keegan Theatre’s musical adaptation of Shakespeare’s As You Like It (★★★), the men and ladies swirling around the fanciful Forest of Arden dance, sing, and fight for love and honor. More than once in Cara Gabriel and Josh Sticklin’s staging of the piece, it’s the fighting that takes center stage. The doses of brute force and violence, well-executed by the actors and fight choreographer Kyle Encinas, are as effective as many of composer Shaina Taub’s songs in transmitting the dynamic, youthful energy that animates the production.

The cast exudes that spirit amid the transporting atmosphere of Matthew J. Keenan’s voluminous in-the-round scenery. Immersing the audience in a forest of tall balconies strung with lights, the set resembles an inviting summer camp deep in a hidden wood, where lovers and exiles roam.

Physically, the setting seems ripe for comedy and romance. The music and lyrics by Taub (also an accomplished singer and actress) occasionally cast their spell too, particularly when voiced by Debora Crabbe as runaway heroine Rosalind. Crabbe carries Taub’s plucky melodies to lustrous heights on “When I’m Your Wife,” Rosalind’s declaration to her beloved Orlando.

Would were her Orlando, Kevin Thorne II, as persuasive a lover as he is a fighter, then the play’s main couple might seem more evenly matched. Thorne grapples with fiery intent in Orlando’s showcase wrestling match against the court champion, but he doesn’t invest his songs and soliloquies with as powerful a sense of purpose.

Omar D. Cruz fares better as Orlando’s rivalrous brother Oliver, but the siblings’ conflict generally registers as a thinner strand in the play’s tapestry of interwoven tales. Maybe it’s a matter of focus, as the adapted script by Taub and Laurie Woolery strains to carve out the various themes, while the direction strains to service all the characters and accompanying plotlines banished from court or passing through Arden.

The production indulges more than enough of the comically grand entrances of the haughty Duke Frederick (Patrick M. Doneghy), a joke that’s amusing the first but not the fourth or fifth time. Meanwhile, far more attention could be devoted to the duke’s deposed brother, Duke Senior (Jade Jones), who has made a home for himself among the innocent animals of Arden.

Jones’ exiled Duke leads a rousing group number, “Oh Deer,” a fun, twangy ditty that speaks to life in the forests of love. As pleasant a song as it is, it doesn’t speak so directly to the story the production seems to be telling. The adapters reserve better storytelling for songs and narration delivered by the bard of this coterie, Jacques, played by Caroline Dubberly. Among the actors who also pick up an instrument here, Dubberly joins in on synthesizer with music director Tiffany Underwood Holmes and the modest pit orchestra.

Sharing the wisdom that “All the World’s a Stage,” Jacques is just one of the show’s pointedly gender-switched roles. Silvius has been made Silvia, portrayed by Caroline Wolfson, who pursues Bianca Lipford’s Phoebe through the forest. Phoebe’s name gives rise to the song “You Phoebe Me,” another amusing joke that wears out its welcome with too much repetition.

In fact, the score runs half a dozen times to the well of reprises, to the detriment of those standout tunes that are heard only once. The songs start to sound the same, even when they’re not the same, just as the concealed identities and star-crossed romances similarly start to run together. Verve and talent are sometimes captivating enough, but in this case, they spin off in too many directions to grasp and hold close.

André Hereford covers arts and entertainment for Metro Weekly. He can be reached at ahereford@metroweekly.com. Follow him on Twitter at @here4andre.
← Previous Story Theater Review: Avant Bard’s “Illyria”
Next Story → Theater Review: Billy Elliot the Musical at Signature