Billy Elliot the Musical dances its way out of trouble

As she lives and breathes, Mrs. Wilkinson, the brash and caring ballet instructor who propels coal miner’s son Billy Elliot to fulfill his dance potential, has a similar effect on the musical that bears his name. Embodied by Nancy Anderson, Wilkinson enters her classroom in Matthew Gardiner’s new staging of Elton John and Lee Hall’s Billy Elliot the Musical (★★★½), and the show exhales. Wearing loose curls, dance heels and leg warmers, she wafts in like a breath of fresh air after being stuck in a coal mine.

The story, adapted from Hall’s Oscar-nominated screenplay for the 2000 film, seems at times to be stuck in those coal mines along with the production. The real-life 1984 British miners’ strike serves as more than mere backdrop for a story about talented eleven-year old Billy (Owen Tabaka) and his family — dad Jackie (Chris Genebach), brother Tony (Sean Watkinson), and elderly Grandma (Catherine Flye).

Yet Gardiner and company don’t capture the milieu of this close-knit English coal-mining town so persuasively that the miners’ plight gathers real potency. They are this production’s ensemble of “Miners,” rather than a specific community of working men and women.

The score tries to get across their collective states of mind with songs like “Solidarity” and “Merry Christmas, Maggie Thatcher,” but the simple melodies by Elton and lyrics by Hall are met with muddy accents and a somewhat pat delivery. The striking miners that Gardiner sends marching around Jason Sherwood’s town and union hall sets tend to look more like musicians in formation than picketing workers or revolutionaries.

The production feels altogether more at home depicting the Elliot household, sadly absent of Billy and Tony’s mum, Jack’s dearly missed wife. Genebach and Tabaka beautifully enact the bond between a father and son mourning the same woman differently, yet together. Billy’s Mum (Crystal Mosser) appears to him in dreams, but it’s only when he goes from boxing class to Mrs. Wilkinson’s ballet class that he starts to live his dreams out loud.

The show likewise comes to life inside Wilkinson’s classroom, in apt contrast to the heartfelt sense of struggle that envelopes Billy at home. Anderson, a well-deserved Helen Hayes Award nominee last season for Arena’s The Pajama Game, finds Wilkinson’s accent, in every form of the word, and sticks to it. She and the show go broad in their comedy, but she’s the real deal all the same in her vibrant turn as the strict, single mom.

Anderson and Tabaka, accompanied by a class full of on-point Ballet Girls, and a delightful Olivia McMahon as Wilkinson’s knowing little girl Debbie, deliver a sure-footed “Shine” and a fabulous “Born to Boogie.”

Tabaka (who alternates performance dates in the title role with Liam Redford, not reviewed here) also finds swell accompaniment in Jacob Thomas Anderson as Billy’s singing, dancing, and cross-dressing gay best friend Michael. Gardiner gives the dancing duo of Billy and Michael an opportunity to truly shine with vigorous choreography in “Expressing Yourself” that Tabaka and Anderson absolutely slay. They’re like a young Gene Kelly and Donald O’Connor bringing home the end of “Moses Supposes.”

The dancing should be spectacular in Billy Elliot, and often it is. The climactic aerial illusion of Billy soaring to incredible heights isn’t so breathtaking, but Tabaka still impresses in his command of the high-flying moment. And Billy’s song “Electricity” declares its message of freedom most powerfully when Tabaka finally lets loose with the dancing that backs up Billy’s words.

Throughout, Gardiner’s choreography for Billy, Michael, and the older Billy (danced by Grant Richards) contributes profoundly to the actors’ solid characterizations. The vivid characterization of Mrs. Wilkinson, however, might owe more to Hall’s script, Kathleen Geldard’s costumes, and Anderson’s three-dimensional portrayal.

As miners go marching past, the mind strays to wonder what Wilkinson’s gotten up to offstage, perhaps out shopping for hairbands and leg warmers with Debbie in tow. She is the wind beneath Billy’s wings, as she might joke in her self-deprecating fashion, but this production really wouldn’t fly without her. 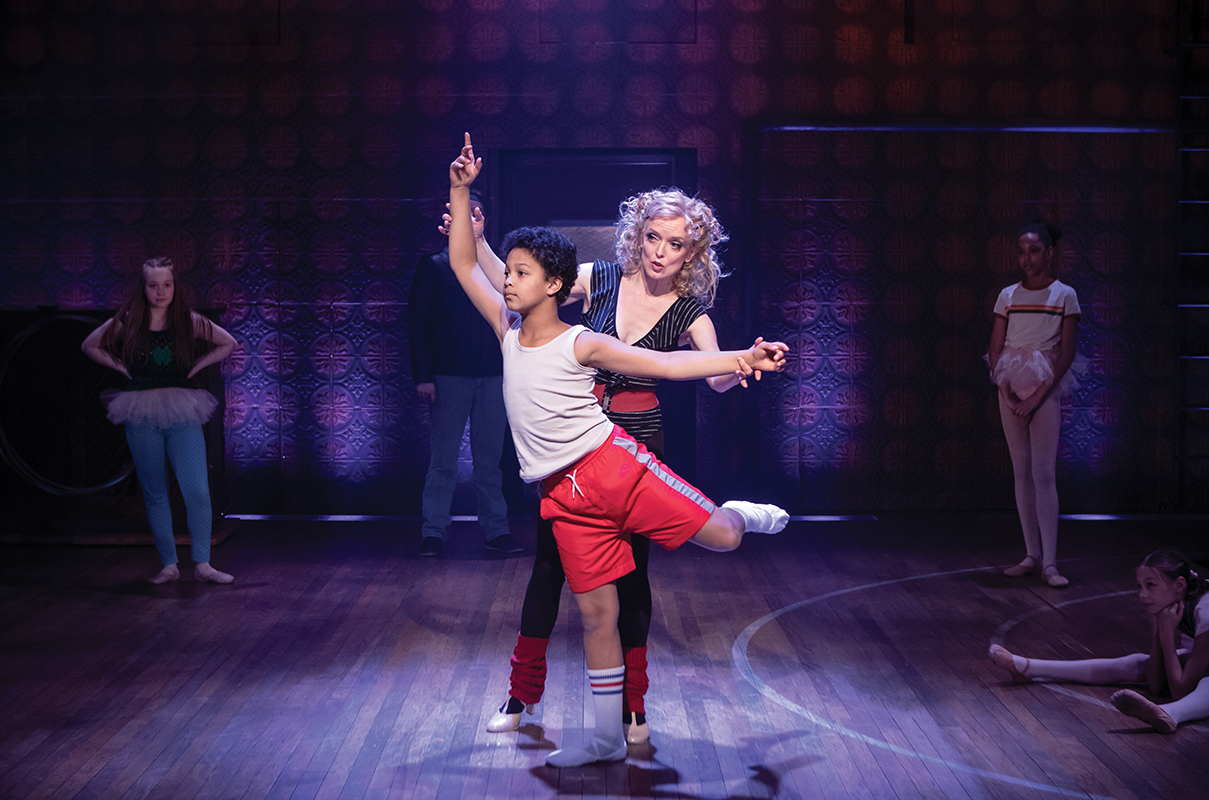