By John Riley on December 18, 2018 @JohnAndresRiley 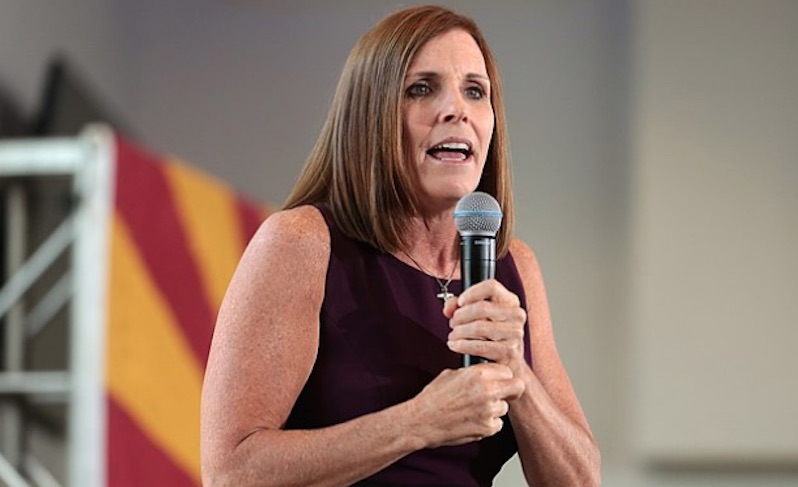 “Martha McSally is uniquely qualified to fight for Arizona’s interests in the United States Senate,” Ducey said at a press conference with McSally in Phoenix.

In November, McSally lost by 2 percentage points to Democratic U.S. Rep. Kyrsten Sinema, the first openly bisexual person elected to the upper chamber, for the seat being vacated by Sen. Jeff Flake. In September, Ducey temporarily named former Sen. Jon Kyl to the seat once held by McCain, on the condition that Kyl would resign by the end of the year.

McSally faces a formidable challenge, as she must run for the seat in a 2020 special election, which coincides with the presidential election — when the state is thought to be up grabs. Then, if re-elected, McSally would have to run for re-election to a fill 6-year term in 2022.

At the press conference on Tuesday, McSally told Ducey she was “humbled by the confidence you’ve placed in me.” She also said she looked forward to working with Sinema when the new Congress convenes, talking about the importance of finding “common ground” despite their differing party affiliations.

Ducey said that Sinema will be sworn in first in January and will be the state’s senior senator, in order to “respect the will of the voters.”

Ducey’s decision to appoint McSally comes after weeks of contemplation. Ducey was reportedly frustrated with McSally for her lack of introspection following her loss, but Senate Majority Leader Mitch McConnell lobbied on her behalf, based on a belief that McSally would be a stronger candidate than other Republicans.

But some LGBTQ advocates are upset at McSally’s appointment, noting that she has not been supportive of equality during her two terms in Congress. She supported an amendment to the National Defense Authorization Act that would allow federal agencies to discriminate against LGBTQ people under the guise of “religious liberty.” She also voted for another amendment to the NDAA that sought to prohibit funds from being used to pay for transition-related healthcare for transgender people.

McSally has consistently opposed marriage equality, as well as efforts to add prohibit discrimination based on sexual orientation and gender identity. She voiced support for the Department of Justice and the Department of Education’s joint decision to rescind Obama-era protections for transgender students that allow them to use facilities consistent with their gender identity. She has also refused to criticize President Trump’s efforts to ban transgender people from serving in the U.S. military.

“In the 2018 midterm election, Arizonans rejected Martha McSally’s toxic agenda and elected pro-equality champion Kyrsten Sinema to represent our state in the U.S. Senate,” HRC Arizona State Director Justin Unga said in a statement. “From her votes to gut critical health care protections, to kowtowing to Trump’s shameful ban on transgender service members, McSally has proven that she is more interested in political pandering than working to address the issues that matter to all Arizonans.”

“Appointing someone who was rejected by Arizona voters just a month ago is not only a slap in the face to Arizonans, but a deliberate and direct attack on LGBTQ people, who have been in Martha McSally’s crosshairs for years,” Drew Anderson, director of campaigns and rapid response at GLAAD. “Arizonans will remember Martha McSally for a lot of things, and morphing herself to be a sheer clone of the anti-LGBTQ Donald Trump will be on the top of that list. Her extreme views are out of step with the people of Arizona and have no place in the U.S. Senate.”