Joshua Harmon’s biting comedy Admissions (★★★), now at Studio, bares sharp teeth, but draws surprisingly little blood as it tears into white American, progressive P.C. priggishness. Director Mike Donahue’s staging is certainly taut, tart, and well-acted, even if the play’s takedown of a self-righteous boarding school admissions administrator is only half as savage as it intends to be.

Diehard liberal Sherri Rosen-Mason (Meg Gibson), dean of admissions at tiny New Hampshire academy Hillcrest, isn’t the play’s only character due for some form of comeuppance. Her politically like-minded husband, Bill (Kevin Kilner), the MLK-quoting headmaster at Hillcrest, will be served a course of crow too.

As with many parents, Sherri and Bill’s reckoning comes courtesy of their spoiled teenager, Charlie (Ephraim Birney). A senior at Hillcrest, Charlie’s dead set on getting into his choice Ivy League school. But he starts to feel he’s at a disadvantage as a white male trying to get ahead in the “diversity first” culture of contemporary academia. Charlie’s anger and resentment about the unfairness he feels he faces pits him at odds with Bill’s sense of ethics, and with Sherri’s carefully cultivated sense of self.

Each of the Masons sweeps themselves into a corner arguing for their notion of racial justice as the family’s admissions drama winds tighter and tighter. Sherri, in particular, finds herself trapped between acting out her public mission and acting on behalf of her family. As much as she takes pride in her successful efforts to increase racial diversity among the Hillcrest student body, her quest to ensure her son’s future will reveal how much she truly prizes diversity.

She might also inadvertently reveal true feelings she’d rather keep hidden from her friend, Ginnie (Marni Penning), a white woman married to one of Hillcrest’s few black instructors, and the mother of Charlie’s biracial best friend.

Ugly admissions eventually do come to light as the talk about race gets real. Yet, in a story explicitly dealing with “race, race, race,” as one exasperated character puts it, everyone gets to be some degree of wrong without anyone ever coming off as irredeemably objectionable. Gibson, Kilner, and especially Birney as ticked off and confused young Charlie, all deliver depth and dimension.

There are no villains here, no stark black and white, just overlapping swaths of gray, which feels realistic but too safe. It’s great that the cast and the play score points for nuance, but maybe, in a world of starkly visible racism and emboldened white supremacists, it’s fine to admit that, occasionally, hate lacks nuance.

Admissions isn’t really about hate, though, or inequality, but about people privileged enough to feel that their good intentions are all it takes to move mountains. It’s also about how a white family, or a pair of white friends or coworkers, might discuss race or skin color when not in mixed company, and how the language of social justice can sound laughably pretentious or downright phony regardless of who’s talking. Sherri’s colleague Roberta (Sarah Marshall), a plainspoken older New Englander, doesn’t get all this woke jargon, but that’s because “she’s so white,” according to Ginnie.

Harmon chooses not to include in the conversation any characters who aren’t white. Of the people of color who get mentioned in Admissions — namely Ginnie’s husband, Don, and son, Perry — none have an audible voice in the debate. The value of exposing the behind-closed-doors attitudes of privileged, educated whites wouldn’t have been forfeit if the Masons or Ginnie or Roberta also had been forced to confront an actual black person onstage, rather than just the mere concept of blackness.

Ginnie more or less points out that, although Sherri devotes a lot of her time to talking about race, there are aspects of being black in America that Sherri’s made no attempt to understand. That might constitute an admission from the playwright that good intentions can only take any of us so far in being able to view and treat one another with total fairness. 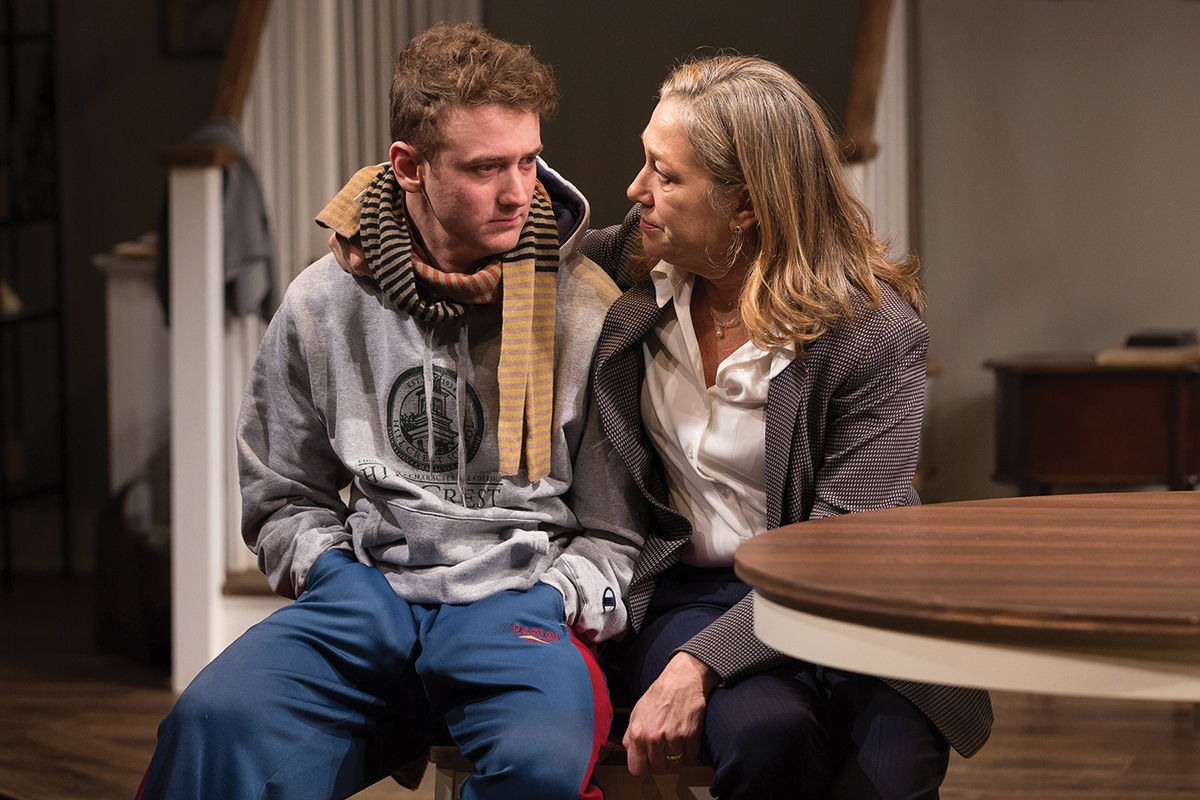