Theater Review: Constellation’s “The Master and Margarita” is overstuffed and undercooked 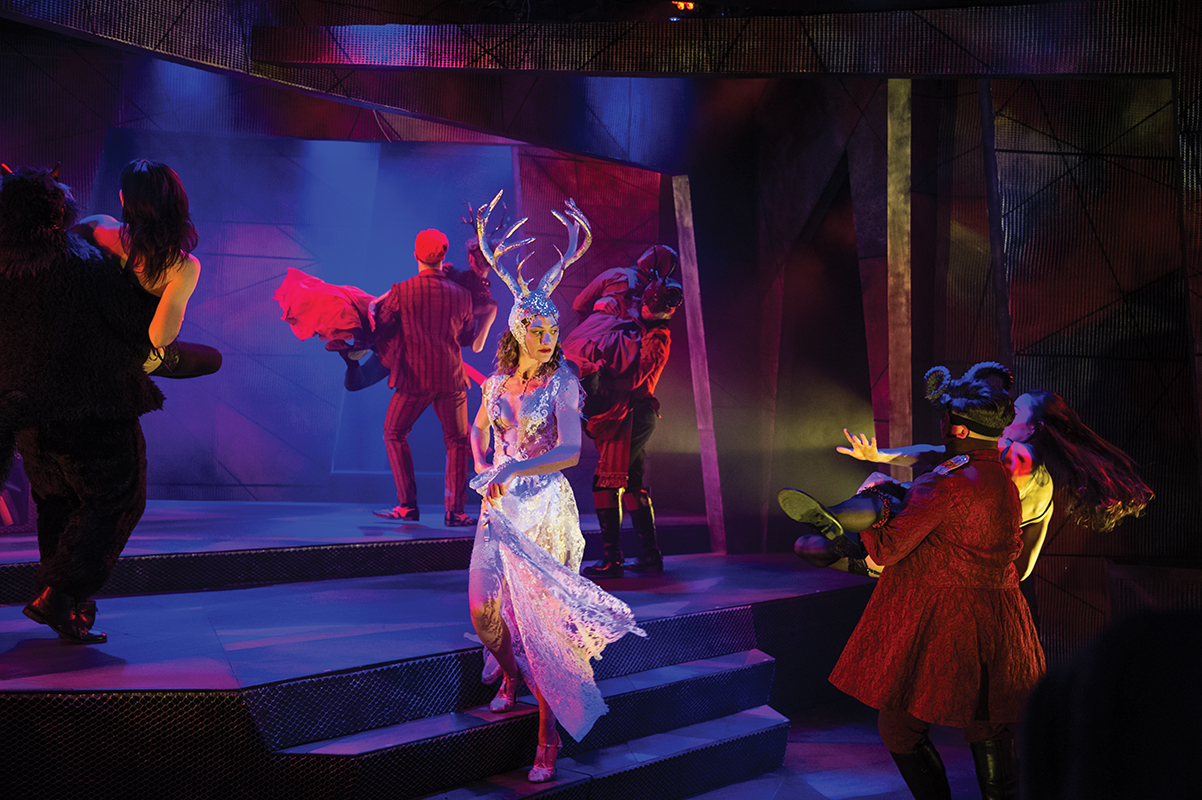 Among the many film, stage, and television variations spawned by Mikhail Bulgakov’s darkly allegorical, Stalin-era novel The Master and Margarita, the 2004 stage adaptation by Edward Kemp appears to be a bullet-point reduction of the tale.

That’s the impression left by Allison Arkell Stockman’s new production of The Master and Margarita (★★) at Constellation Theatre. The hectic staging ushers along a winding plot, but without much involving the audience in the supernatural journey of Muscovite author the Master (Alexander Strain) and his devoted lover Margarita (Amanda Forstrom).

The pair’s destinies are shaped by demonic intervention, as Satan appears in 1930s Moscow in the form of Woland (Scott Ward Abernethy), a dapper professor of black magic. Attended by his minions Azazello (McLean Fletcher), Behemoth (Louis E. Davis), and Fagott (Dallas Tolentino), Woland wreaks havoc in the lives of the city’s artists and literati, specifically those involved in rehearsals for the Master’s historical play about Pontius Pilate (Jesse Terrill) pondering the fate of Yeshua Ha-Nozri.

Alternating between Moscow and ancient Yershalaim, between Stalin’s Russia and Pilate’s court, the play and the play within the play both address repression and resistance. Yet, the thrust of Bulgakov’s subversive commentary gets lost in the pileup of shifting scenes, stilted language, and uneven acting throughout the large ensemble, including Strain’s rather ho-hum hero.

For her part, Forstrom is a compelling Margarita, registering a depth of devotion to the Master and his art that practically on its own sustains an interest in their relationship. Meanwhile, Abernethy and Fletcher’s fiendish turns as Woland and his fanged henchwoman, Azazello, maintain some interest in the play’s seemingly one-sided battle between the forces of oppression and freedom. And the battleground supplied by scenic and lighting designer A.J. Guban is especially eye-catching, all expressionistic, sharp angles and deep shadows, contrasted nicely by Erik Teague’s romantic costumes.

These elements of the production combine for fleeting highs that stir the imagination, like the macabre full moon ball that Woland hosts in hell. But such peaks are too few and far between in the play’s rambling slog through this Russian garden of good and evil.

The Master and Margarita by Constellation Theatre