Nominee has a history of flippant or inflammatory writings expressing disdain about LGBTQ rights, as well as other issues

By John Riley on March 6, 2019 @JohnAndresRiley 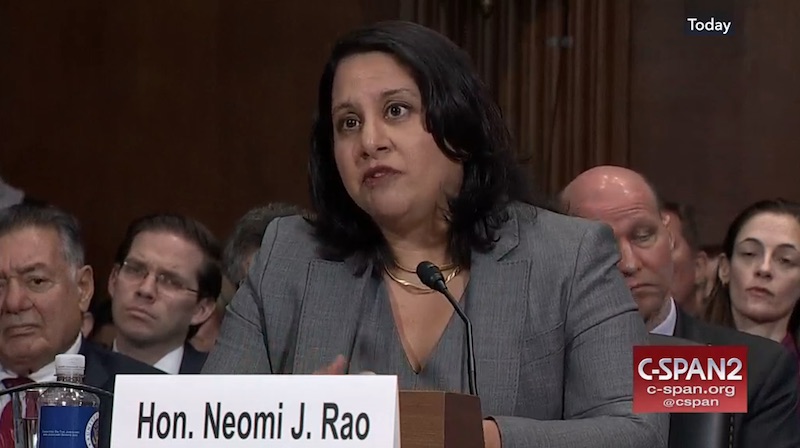 LGBTQ advocates are balking at President Donald Trump’s selection of Neomi Rao, the current administrator of the Office of Information and Regulatory Affairs, for a judgeship on the influential D.C. Circuit Court of Appeals.

Rao, who was nominated to replace Supreme Court Justice Brett Kavanaugh, has raised red flags for many activists and civil rights advocates for a number of reasons, which is why Democrats have so ardently opposed her nomination. Last week, Rao’s nomination was officially approved by the Senate Judiciary Committee on a party-line vote, meaning the U.S. Senate will soon decide whether to confirm her.

1. She’s been named to the D.C. Circuit Court of Appeals, which is often thought of as a stepping stone to the U.S. Supreme Court — even though she has no judicial experience.

Rao’s name has been bandied about by court watchers as a possible Supreme Court justice in the future, and the D.C. Circuit could give her the credentials should she be named to the nation’s highest court the next time a vacancy arises.

Most importantly, the D.C. Circuit is the main forum where big legal fights over regulatory and executive power are often waged before making their way up to the Supreme Court. Examples of cases that have been considered include habeas corpus rights for Guantanamo Bay detainees, whether a president has he right to make certain recess appointments, and a host of environmental regulations.

Of course, because Rao has never been a judge, there are no major decisions to which her detractors can point that are problematic. However, Rao has left behind a number of writings that give insight into her judicial philosophy.

During her college career at Yale University and shortly after her graduation in 1995, Rao wrote a series of op-eds in which she described race as a “hot, money-making issue,” affirmative action as the “anointed dragon of liberal excess,” welfare as a program “for the indigent and lazy,” and that if a woman “drinks to the point where she can no longer choose, well, getting to that point was part of her choice.”

She also criticized environmental groups that “accept issues such as global warming as truth with no reference to the prevailing scientific doubts.”

Rao also wrote about friction between a campus LGBTQ organization and a group for conservative gay students, saying: “Trendy political movements have only recently added sexuality to the standard checklist of traits requiring tolerance.”

During her confirmation hearings last month, Rao expressed “regret” for some of her past writings, which she said, in retrospect, make her “cringe.” She particularly tried to walk back her comments on sexual assault, saying “no one should blame a victim,” while also insisting that some of her commentary amounted to “common sense observations” that would make women less likely to be a victim of assault, reports NBC News.

However, Rao has not apologized for her comments on LGBTQ rights, including her contention that sexual orientation is a “behavior” that can be changed.

“People who tolerate women in the workplace and blacks and Hispanics as neighbors view homosexuality as a behavior — and behaviors, unlike gender and race, are subject to change,” Rao wrote. “No one knows whether sexuality is a biological phenomenon or a social construct. The truth may lie somewhere in the middle.”

3. Rao has demonstrated hostility towards members of the LGBTQ community in those writings.

Writing for the Yale Herald in 1994, Rao claimed that “homosexuals want to redefine marriage and parenthood.” She characterized the fight for LGBTQ legal equality and social inclusion as a “radical” response to “the demands of normalcy,” involving efforts “fundamentally to alter culture and society.” In that same piece, Rao wrote: “Homosexual activism in its most visible form engages mainstream society in a total cultural challenge … [which] comes in the form of explicitly sexual printed material.”

Although Rao’s academic writings are more professional in nature, she still continues to express views that are, at best, skeptical of the idea that same-sex couples are entitled to the same rights under the law that are currently enjoyed by heterosexual couples. Rao was questioned during her confirmation hearings about writings in which she called into question the Supreme Court’s majority decision in U.S. v. Windsor, specifically Justice Anthony Kennedy’s references to the “dignity” that same-sex couples are denied when they are their legal marriages are not recognized under the law.

In a letter to Senate Judiciary Committee Chairman Lindsey Graham (R-S.C.) and Ranking Member Dianne Feinstein (D-Calif.), Lambda Legal cited Rao’s contention that there is no constitutional basis for recognizing the “dignity” of marriages as an example of her hostility to LGBTQ people.

“The trouble is that Ms. Rao’s analysis suggests that the equal recognition demanded for same-sex married couples in United States v. Windsor, for example, is materially different from the recognition afforded others in equal protection cases, and is constitutionally suspect,” the organization wrote. “… It is profoundly troubling that Ms. Rao resists the resulting constitutional rule — that being branded as a second-class citizen is a serious harm in and of itself, separate from particular benefits or services that also are at issue.”

Unfortunately, U.S. Sen. Cory Booker (D-N.J.) missed the mark when questioning Rao about her views on LGBTQ rights during her confirmation hearings, choosing to ask whether she had ever employed LGBTQ individuals, and whether she thought gay relationships were “immoral” or “a sin.” Rao, who is Jewish, responded that she did not see how those were relevant, eventually saying: “Whatever my personal views are on the subject, I would faithfully follow the precedent of the Supreme Court.”

The problem with Booker’s line of questioning is it did two things: 1) allowed Republicans and religious conservatives to paint Democrats as hostile to religion and particularly people who hold religious beliefs that oppose homosexuality; and 2) took the focus off of Rao’s writings and her previously stated views on LGBTQ equality, which are more relevant to how she’d act as a judge than whether she personally endorses LGBTQ relationships. 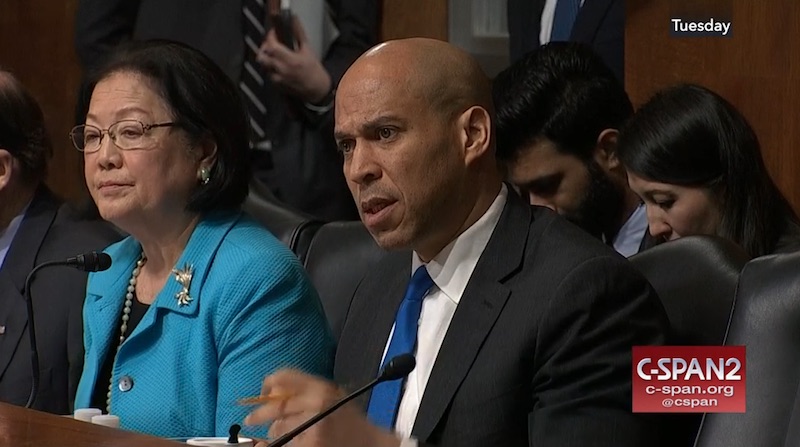 4. She used the racially-charged slur “oreo” to refer to blacks who do not adhere to stereotypical roles — something that doomed Ryan Bounds, another Trump judicial nominee.

As part of her writings on race, Rao criticized people on the political Left for claiming to embrace diversity, but only if minorities adhere to certain roles or political beliefs. Rao, who described herself as Asian Indian in a piece titled “How the Diversity Game is Played,” blasted “multiculturalists, who separate and classify everyone according to race, gender and sexual orientation.”

“Those who reject their assigned categories are called names: So-called conforming blacks are called ‘oreos’ by members of their own community, conservatives become ‘fascists.’ Preaching tolerance, multiculturalists seldom practice it,” she wrote.

Rao has largely not been criticized by Republicans for the use of the term “oreo” — prompting accusations of hypocrisy from progressive groups. Last year, Sen. Tim Scott (R-S.C.) helped block the nomination of Trump pick Ryan Bounds to the 9th U.S. Circuit Court of Appeals after it was revealed the nominee had used the terms “oreos”, “twinkies,” and “coconuts” to refer to minorities who do not exhibit stereotypical behavior or political views when critiquing how “the Left” views diversity. Progressive groups, including LGBTQ organizations, note that the sentiments expressed by Rao are almost identical to those expressed by Bounds, but Rao has not received any blowback.

5. Rao has overseen the rollback of regulations under the Trump administration — including those that could potentially protect LGBTQ people from discrimination.

In her capacity as White House Administrator at the Office of Information and Regulatory Affairs (OIRA), Rao has been tasked with reviewing rules issued by government agencies and other actions. Rao’s political beliefs generally take a skeptical view of regulations, viewing them as overly burdensome to businesses and sometimes even infringing on individual freedoms.

For LGBTQ people, that strict view of what actions or regulations can be undertaken by government can be seen as a hindrance. For instance, members of the community have seen some rights or protections extended towards them based on administrative interpretations of certain laws. One example of this was the Obama administration’s guidance to schools on how Title IX’s protections against sex discrimination apply to transgender students, thereby allowing them to have their correct gender identity recognized and entitling them to access restrooms or facilities that match that gender identity.

But under the Trump administration, agencies overseen by OIRA have adopted more strict interpretations of laws, and thus, have rolled back interpretations that benefit the LGBTQ community. Many advocates worry that if Rao is confirmed — especially given her expressed disdain for LGBTQ rights — she would be unable to be impartial when it comes to cases involving LGBTQ parties, and might adopt and enforce interpretations of law that are hostile to the LGBTQ community because she does not see their quest for equality as legitimate.

“Neomi Rao’s past is her prologue. Her writings have demonstrated hostility towards sexual assault survivors, racial discrimination, climate change, and LGBTQ people,” Vanita Gupta, the president and CEO of The Leadership Conference on Civil and Human Rights, said in a statement after Rao’s nomination was approved by the Judiciary Committee. “She has implemented these extremist views in her current role as the Trump administration’s regulatory affairs department head, and has systematically devastated public protections for sexual assault survivors, those facing discrimination, and the environment. Rao’s record shows she will not be a fair and impartial judge, and senators must not fill the seat vacated by Brett Kavanaugh on the D.C. Circuit with another right-wing ideologue.”

Sharon McGowan, the legal director and chief strategy officer at Lambda Legal, decried the decision by Republicans on the Judiciary Committee to green-light Rao’s nomination, even though some of them also expressed concerns about Rao’s past statements.

“Regardless of one’s political affiliation, Ms. Rao’s offensive use of racial slurs and her disturbing writings on sexual assault, diversity, and marriage equality are offensive enough to disqualify her from consideration for a lifetime appointment to the federal bench,” McGowan said. “Yet Senate Republicans continue to turn a blind eye and rubber-stamp every nominee put forth by the Trump Administration. We hope that there are still Republicans capable of putting principle above politics, if and when Ms. Rao’s nomination goes to the full Senate. The American people deserve better than this.”