A Wyoming teacher complained about anti-gay flyers appearing in school. The principal fired her. 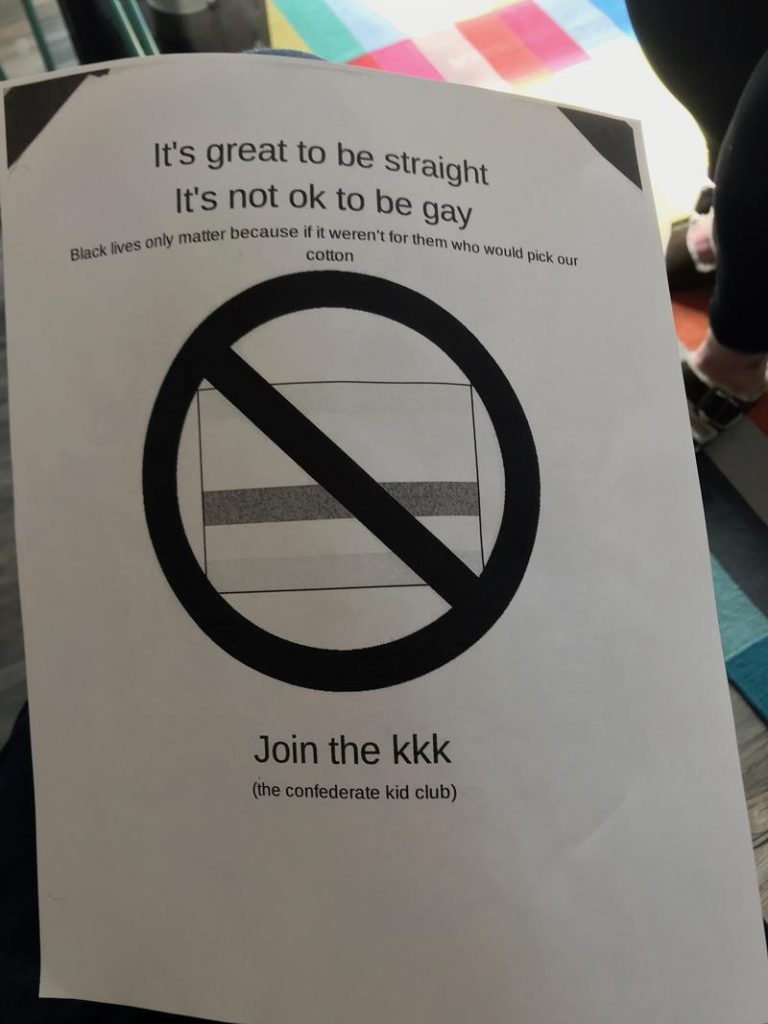 A high school teacher in Wyoming has lost her job after complaining about racist and homophobic flyers being posted in her school.

“It’s great to be straight. It’s not OK to be gay,” the flyers read. “Black lives matter only because if it weren’t for them who would pick our cotton. Join the KKK (the confederate kid club).”

Cook reached out to LGBTQ advocacy group Wyoming Equality on Wednesday, March 27, to inform them of the flyers, the Wyoming Tribute Eagle reports. The group also received multiple complaints from other parents and community members.

However, when Principal Jeff Conine learned of the incident, rather than tackle the flyers or find those who posted them, he instead fired Cook.

Cook received an email Wednesday afternoon from Conine telling her that “due to incidents that have occurred at McCormick you are no longer welcome as a guest or a substitute teacher in our building.”

Cook was told that she could only visit her husband — a full-time reacher at McCormick — if there were no students in his classroom. 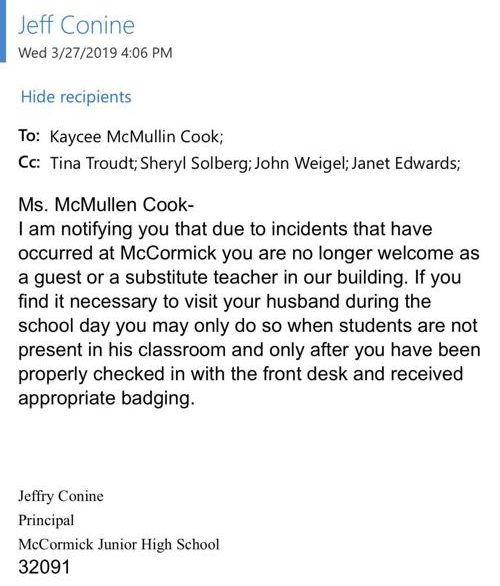 The email received by Kaycee Cook

Outcry over the incident quickly followed, with 50 students holding a demonstration on Thursday, March 28, with “love is love” signs and rainbow flags.

“This is unacceptable,” she said. “It does not reflect the values of Cheyenne. We’re not going to tolerate this. And we’re going to show up and support our LGBT youth and our black youth with unwavering pride and support.”

Cheyenne Mayor Marian Orr tweeted her sorrow over the situation, and told students they were “loved.”

“Tonight, my heart is the heaviest it’s been since taking office,” Orr wrote. “This is not right. To the youth in our community: You are loved. You are valued. We need you to take us forward. You are Cheyenne.”

Tonight, my heart is the heaviest it’s been since taking office. This is not right. To the youth in our community: You are loved. You are valued. We need you to take us forward. You are Cheyenne. https://t.co/NSvk0MRkKv

Speaking to the Tribune Eagle, one member of Cook’s GSA, who asked to remain anonymous, said that the members were being regularly harassed by a particular group of students.

“I was in GSA until about four weeks ago, until it really started to get bad,” she said, adding that the perpetrators were “a group of boys who said they were homophobes and racists.”

“That’s what they call themselves,” she added.

The school district, Laramie County School District 1, issued a statement offering support to LGBTQ and black students at the school.

“In the midst of an investigation regarding inappropriate flyers that were posted at McCormick Junior High yesterday, (LCSD1) is offering support to our LGBTQ and black students who were reportedly targeted through the incident,” the statement read.

Burlingame said that while she believed the district supported students who were targeted by the flyers, “I don’t really feel the principal, Jeff Conine, shares that goal.”

However, this week the district announced that not only had it identified the student responsible for posting the flyers, Cook would also likely be reinstated to her role.

LCSD1 Superintendent Boyd Brown said that the student, who is a minor, would not be named but would be disciplined in accordance with district policy.

Speaking to the Tribune Eagle, Brown said that the district wouldn’t comment on Principal Conine’s initial response to the situation due to personnel confidentiality.

However, he promised the district would “continue to investigate” the flyer situation “to see how widespread it is.”

In addition, students would receive lessons specifically about discriminatory bullying, and the school district’s board of trustees will review policies relating to the handling of the incident.

Board Chairwoman Marguerite Herman said that the “immediate remedy” of identifying the student had been made, but that the board will now determine how comprehensive the district’s anti-bullying and harassment policies are. The board will then “insist [the policies] be enforced.”