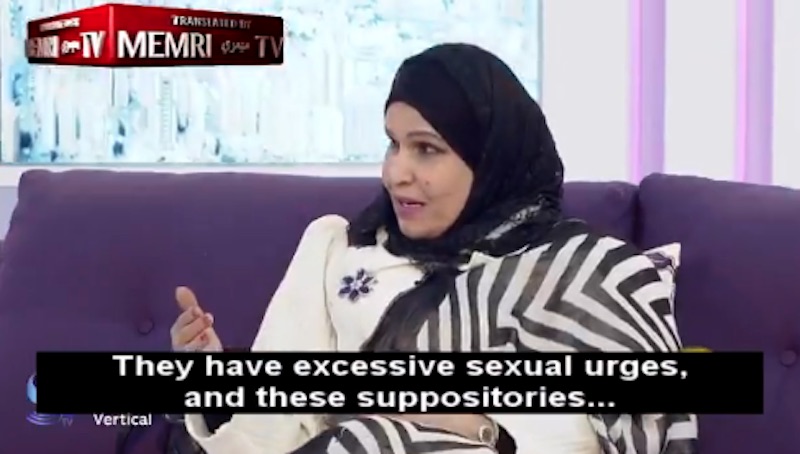 An anti-gay Kuwaiti academic has claimed she’s invented suppositories that will “cure” homosexuality, which she claims is based on science and “prophetic medicine.”

Dr. Mariam Al-Sohel, who has previously expressed support for conversion therapy, appeared on Scope TV back in March to claim that she had developed a suppository to stop same-sex sexual urges.

“I discovered therapeutic suppositories that curb the sexual urges of boys of the third gender [those that experience same-sex attraction], as well as the fourth gender, which is butch lesbians,” Al-Sohel said. “They have excessive sexual urges.”

“This is science, and there is nothing to be ashamed of,” Al-Sohel said in the interview, a portion of which was posted to Twitter by the Middle East Media Research Institute.

She also claimed that “bitter foods” increase masculinity and implied they can assist in avoiding homosexuality.

Same-sex activity is currently criminalized in Kuwait, and can carry a sentence of up to six years in prison. The country also has a law targeting transgender people that outlaws “imitating the appearance of a member of the opposite sex,” which can carry both a fine and prison time if convicted.

Al-Sohel’s comments have been harshly criticized by LGBTQ advocates in the West.

“The cure for homosexuality is popular among religious fundamentalists. It is quackery and charlatanry,” Volker Beck, a Green Party politician and LGBTQ advocate from Germany, told The Jerusalem Post. “Such therapies and their apologists must be warned. Whether it is Al-Sohel’s suppositories or from Catholic doctors in Germany, it is hocus pocus that reveals much about the mental state of these people.”

John Riley is the local news reporter for Metro Weekly. He can be reached at jriley@metroweekly.com
← Previous Story Brunei defends stoning gay people to death, claiming convictions will be rare
Next Story → Brazil’s president does not want his country to be a “gay tourism paradise”