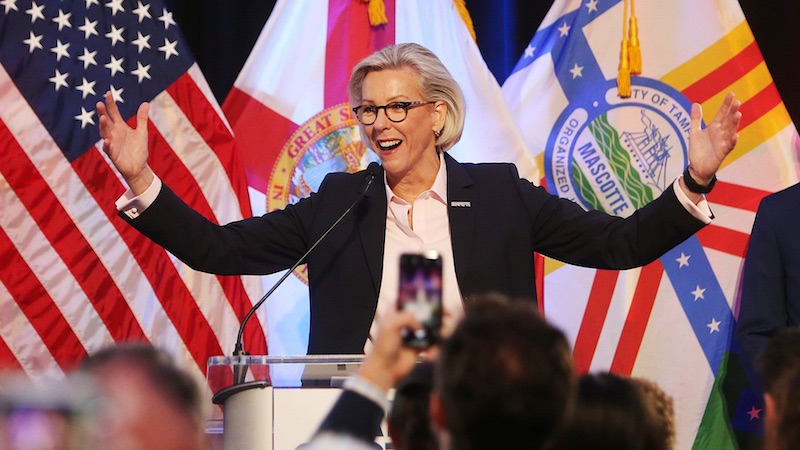 The “Year of the Lesbian Mayor” continued on Tuesday night after voters elected former Tampa Police Chief Jane Castor in a landslide over businessman David Straz in a runoff election to become the city’s top executive.

Her victory makes Castor the first openly LGBTQ mayor of Tampa and the first openly LGBTQ person ever elected mayor of a top 100 city in the Southeastern United States. She also becomes the third out lesbian to win a big city mayoral race this month, following in the footsteps of Chicago’s Lori Lightfoot and Satya Rhodes-Conway of Madison, Wis.

In her mayoral bid, Castor was supported and endorsed by the LGBTQ Victory Fund, which seeks to elect LGBTQ people to public office. She earned the organization’s highest endorsement level, and Victory Fund directly contributed $1,750 and raised more than $4,000 for her campaign.

“A lavender ceiling was shattered in Florida Tuesday night — with voters overwhelmingly electing Jane Castor the first openly lesbian big city mayor in the Southeastern United States,” Annise Parker, the former mayor of Houston from 2010-2016 who currently serves as president and CEO of the LGBTQ Victory Fund, said in a statement.

“Both LGBTQ people and women face tremendous obstacles in running for public office, but Jane’s victory shows lesbian candidates can win citywide office with a strong record of public service and policy priorities that align with their constituents,” added Parker. “While voters chose Jane because of her vision for Tampa, her willingness to be open and honest about her life lent her an authenticity that voters are drawn to not just in Tampa, but across the nation. That is why an unprecedented number of lesbian candidates are plowing through crowded primaries and winning big city mayoral races this cycle — putting us on-track to make 2019 the Year of the Lesbian Mayor.”

Castor becomes only the fifth out lesbian ever elected mayor of a top 100 city in history, following Parker, Lightfoot, Rhodes-Conway, and Seattle Mayor Jenny Durkan, who was elected in 2017. Should Jolie Justus win a runoff election for Kansas City (Mo.) mayor this June, the number of big city lesbian mayors will rise to six.

Currently, there are 38 openly LGBTQ people across the country who are serving as mayors of cities of any size.

“Jane Castor inspired voters by showing her dedication to Democratic values and the issues that matter most to working families,” Perez said in a statement. “…Our diversity is our greatest strength, and our elected leaders should reflect the communities they represent. … I look forward to working with Mayor-elect Castor to make Tampa a more inclusive, equitable, and welcoming place for all.”

John Riley is the local news reporter for Metro Weekly. He can be reached at jriley@metroweekly.com
← Previous Story Mississippi man had his jaw broken because attackers thought he was gay
Next Story → Transgender Tennessee natives sue state for blocking them from updating their birth certificates