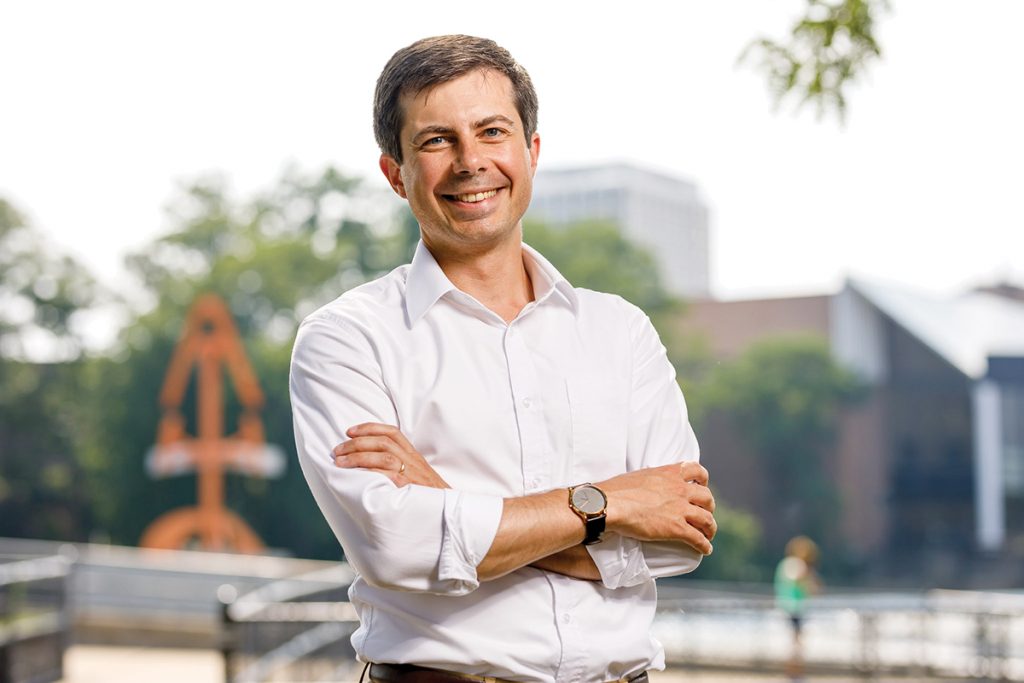 South Bend Mayor Pete Buttigieg officially launched his presidential campaign for the White House on Sunday, attempting to portray himself as an antidote to President Trump and his “scorched earth” brand of politics.

Speaking from inside the former Studebaker plant that once served as the chief economic engine of his hometown, Buttigieg sought to rebut the premise of Trump’s campaign slogan “Make America Great Again” by arguing that the country needs to stop looking to its past for inspiration or guidance.

Buttigieg hopes to cast himself as a youthful, once-in-a-generation leader who is uniquely poised to lead the country in a progressive direction, utilizing new, outside-the-box solutions to address its myriad problems.

Using the city of South Bend’s own turnaround as a example, Buttigieg highlighted the progress and large-scale development of the city’s downtown, for which he claims credit, saying: “More people are moving into South Bend than we’ve seen in a generation. Thousands of new jobs have been added in our area, billions in investment. Now, there’s a long way for us to go.But we’ve changed our trajectory and shown a path forward for communities like ours.

“And that’s why I’m here today. To tell a different story than ‘Make America Great Again,'” Buttigieg added. “Because there’s a myth being sold to industrial and rural communities: the myth that we can stop the clock and turn it back. It comes from people who think the only way to speak to communities like ours are through resentment and nostalgia. They’re selling an impossible promise of returning to a bygone era that was never as great as advertised to begin with.”

In a way, Buttigieg’s argument for why he should replace Trump as president is based partially in his identity — as a young, 37-year-old, openly gay, veteran, millennial mayor from the Midwest, he represents a stark contrast with the current occupant of Oval Office.

Buttigieg also argues that, despite not having a record in Washington, he is the person needed at this moment in time because he is the only one that will be willing to take on modern-day challenges by pushing for an overhaul of the nation’s voting and judicial systems, finally tackling climate change as a looming threat, and ensuring that every American has access to Medicare through a mechanism that would allow people to “opt in” if they believe it would save them money over an individually purchased or employer-provided plan.

“I recognize the audacity of doing this as a Midwestern millennial mayor,” he said. “But we live in a moment that compels us each to act…. It’s time to walk away from the politics of the past, and toward something totally different…. That’s why, this time, it’s not just about winning an election — it’s about winning an era.”

With his entry into the race, Buttigieg joins a crowded Democratic field that could number as much as 20 by the time the first debates take place this summer. Recent polls have shown Buttigieg surging ahead of other much-touted candidates, including Sens. Kamala Harris, Elizabeth Warren, Amy Klobuchar, and Cory Booker, and Reps. Tim Ryan and Tulsi Gabbard, and just behind two candidates with almost universal name recognition: former Vice President Joe Biden and the runner-up in 2016’s Democratic primary, Sen. Bernie Sanders (I-Vt.).

He has also proven to have some star power, eclipsing former Rep. Beto O’Rourke (R-Texas) when it comes to press coverage and mentions on social media. According to a tweet from his campaign communications adviser, Lis Smith, Buttigieg was able to raise more than $1 million in the four hours immediately following his announcement on Sunday.

He has also made an impression among some more liberal Democratic voters who wish to see their party be more combative when dealing with Republicans through digs or comments he’s directed at Trump and Vice President Mike Pence, who he’s portrayed as a religious zealot for his alleged anti-gay beliefs and a hypocrite for condoning what he sees as President Trump’s bad or amoral behavior in office.

“The horror show in Washington is mesmerizing, all-consuming,” Buttigieg said in a swipe at the Trump White House, which was marked by chaos and staff infighting for a significant portion of its first two years in office. “But starting today, we are going to change the channel.”

John Riley is the local news reporter for Metro Weekly. He can be reached at jriley@metroweekly.com
← Previous Story Trump starts blocking transgender people from military service as “horrific” ban comes into effect
Next Story → Transgender woman beaten into unconsciousness by mob in Dallas