Junk makes the world of banking genuinely interesting, but lacks any human connection

Arena Stage prides itself, among other things, in showcasing plays that touch on powerful moments in American history, be they political or cultural. When they work, these theatrical accounts enthrall because they tunnel through the headlines and history books and into the messy stew of all things human. They make the momentous intimate, capturing the truth that no matter how iconic a person may be, they are not a super-species; they are complex people in complex circumstances. If handled well, their place in history will never look the same.

Getting to this point is a challenge. The playwright must provide enough (hopefully subtle) expository to provide context, but he or she must spend equal if not more time in evoking the mélange of motives, dreams, vulnerabilities, and needs — half of them vaguely irrational — that tug and nip at the psyche whenever humans act. An audience may not know what it is like to make history, but every audience member will, in their own lives, have lived in such states of untenable suspension and then, for better or worse, made choices. The bottom line is that to truly work, a historical play must exude humanness like an odor.

Which brings us to Ayad Akhtar’s Junk (★★). Although the names have been changed, this is essentially a rapid-fire depiction of the havoc wrought in the 1980s by Michael Milken (here dubbed Robert Merkin), and others, who devised a way to use so-called junk bonds to finance immensely-profitable deals. It is, at its heart, a very informative, interesting enactment of how this financing worked, some of the mores behind it, and the casualties left in its wake.

The plus here is that Akhtar clearly translates the complex world of bonds, debt, and insider trading into something not just understandable (at least for those who read a newspaper), but intriguing. There is, of course, a fair amount of expository. But Akhtar’s device using a journalist trying for a book (Judy Chen, played without much nuance by Nancy Sun) covers some, while his round-robin of fast-paced scenes (nicely paced here by director Jackie Maxwell) helps disguise his injection of the rest. It’s almost a game to keep up and it cleverly mimics how hard it must have been for anyone trying to pay attention at the time. If you want to learn something of how current banking and lending regulations came to be, it’s a dynamic vehicle.

But — and there is a but — as interesting as all this is, a sense of the actual humans behind it all simply doesn’t survive the high-tensile content. Characters are sketched, key moments outlined, but the surface is never disturbed. Akhtar does try — a few nanoseconds of the Merkin marriage surface first over Robert’s ill-advised insider trading and later over whether he should take a plea deal, but there is absolutely nothing revealed of these people. When the target of Robert’s hostile takeover, Thomas Everson Jr., bemoans the loss of his family business, it is cliched, the references to his personal insecurities tacked on. Attempts to add humanity — Amy Merkin nursing a baby for 30 seconds, a bit of marital groping, and Everson suddenly revealed as suicidal — are paper thin. They cannot resonate without more of these characters’ inner landscapes.

And although some of the excellent performances bring color, there just isn’t room for more than a smidgen. Case in point is Thomas Keegan’s Merkin. When asked what drives him to win the ever-bigger deal and make more money than he could ever need, Akhtar allows him only a “because I can.” Though Keegan may give the moment his all, the answer is profoundly boring. There must be more, but we are denied it. At two hours with no intermission, as riveting as a junk bond strafing may be, this kind of skimming wears thin.

The lack of attention to character and genuine interaction has another knock-on effect. Although Akhtar references sympathetically the antisemitism of the day in several ways, the Jewishness of the main protagonist and his particularly sleazy client, Israel Peterman, comes up with a regularity that, juxtaposed as it is with the ruthless quest for money, veers uncomfortably close to a trope. This was no doubt unintentional, but it highlights a grating lack of subtlety and begs the question of what, without more depth, it possibly adds. It would have been far more challenging — and far more interesting — to get behind the labels and into something human and real. Merkin doesn’t seem to care a toss for religion. Is he an atheist? Where does his mind go when it’s not on money? Who is this guy?

Still, Keegan does his best with the material, giving Merkin an intriguing kind of charisma with his unblinking stare and natural bellow. He looks warm-blooded in his shirtsleeves and slacks, it’s too bad we see almost nothing of what makes him tick. For his sheer Aspen-vacation-home swagger, David Andrew MacDonald offers a mesmerizing Leo Tresler, a business rival who seems to be courting a secret, while Edward Gero ably captures the rather schematically-drawn Everson. As Peterman, Jonathan David Martin delivers the required repulsiveness, though almost overplays it. Finally, as Everson’s long-suffering lawyer, Maximilien Cizik, Lise Bruneau subtly suggests more than she is given, but remains another unplumbed mystery. In smaller roles, Elan Zafir delivers an entertainingly well-drawn ne’er-do-well trader Boris Pronsky and Perry Young is a nicely-energetic Raul Rivera, Merkin’s Cuban-American lawyer.

In sum? If this may be a spirited retelling, it doesn’t do more than follow the money. 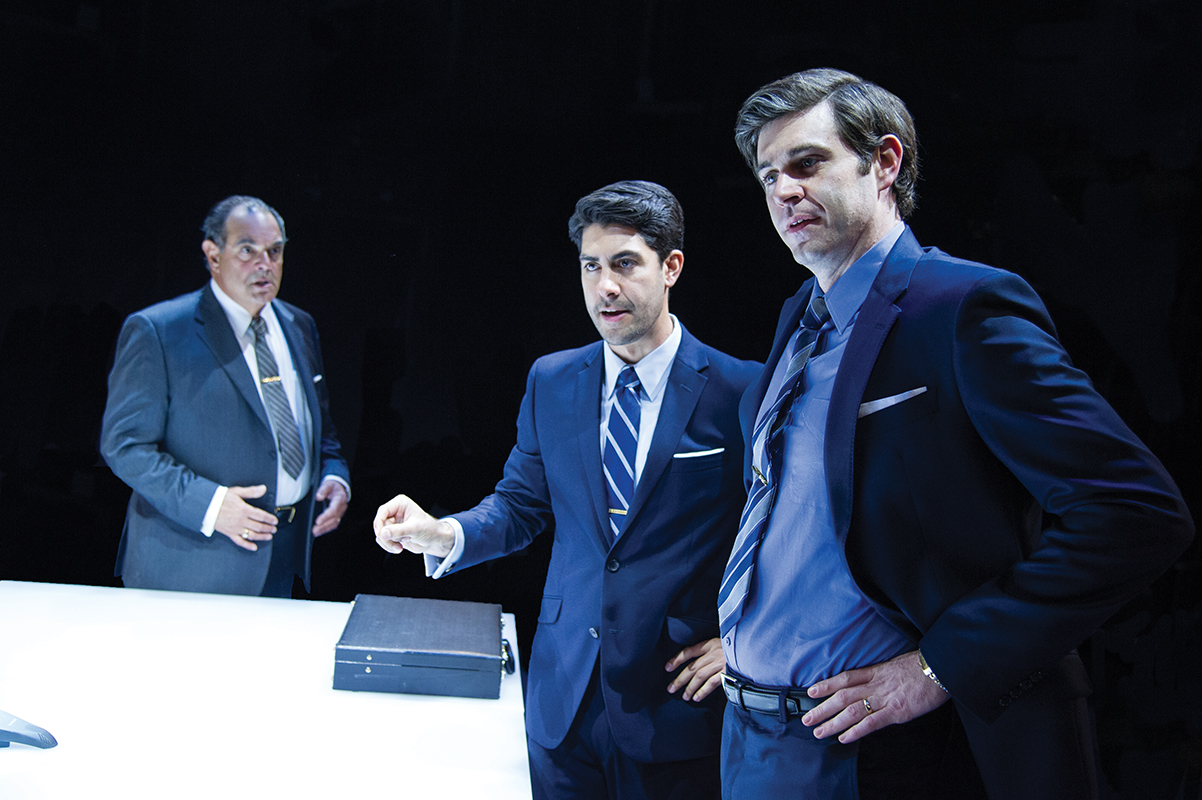