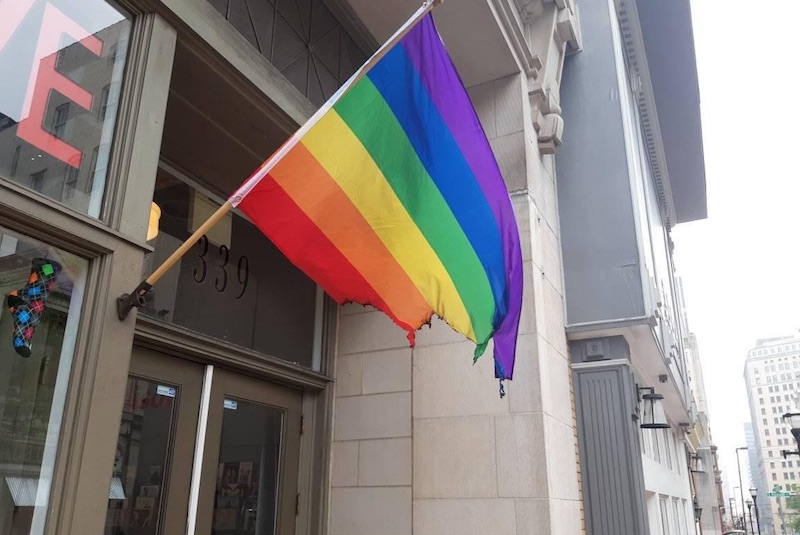 A gay pride flag outside an LGBTQ business in Baltimore’s Mount Vernon neighborhood was burned in an apparent hate crime, according to police and the store owner.

On Saturday, May 4, two unknown men were caught by surveillance cameras running away from the business formerly known as Same Gender Love, located in the 300 block of North Charles Street, shortly after setting the flag in front of the greeting card store on fire.

An employee of the store reported the flag burning to police around 9:40 a.m., but said the people in the shop did not see the suspects, according to Detective Jeremy Silbert, a Baltimore police spokesman.

Marva Laws, the shop’s owner, was not in the shop at the time of the incident, but ordered the staffer to replace the flag immediately.

“My first reaction was full of emotion,” Laws told The Baltimore Sun. “I was very angry because this is mine. It belongs to me. Of course I took it personally. My second reaction, after I think about it, is I feel sorry for whoever did it. What statement are you making, other than showing that somebody ignorant walked past my store?”

Merrick Moses, the board chair of the Pride Center of Maryland, said he had been filming an episode of Queer Conversations, an Internet series featuring racial, sexual, and gender minorities, inside the shop at the time of the flag-burning.

He and the show’s host, LaToi Williams, ran outside with the manager to find the flag still smoldering, which made him angry and upset.

Shortly after the incident, Moses posted a picture of the destroyed flag to Facebook, writing: “We were just minding our own ‘queer’ business, not hurting anyone. Why burn our flag? What’s the purpose? Why can’t LGBTQ people live in peace?”

“That flag represents not just a people but it also represents a struggle of a people to live as human beings,” Moses later told the Sun. “The flag was adopted because it shows the diversity of our community. It also shows our strength and the promise of our country, that all people are created equal. When someone burns this flag, it says we don’t respect your humanity and we think you don’t belong here.”

The Baltimore Police Department’s criminal intelligence unit is working with officers who patrol the Mount Vernon neighborhood and the department’s LGBTQ liaison as the investigation continues.

The store, which has since been renamed to Love Is Love to broaden its appeal beyond customers who identify as gay or lesbian, posted a Facebook video of a new gay pride flag flying proudly outside the storefront with the caption “#LoveAlwaysWins.”

John Riley is the local news reporter for Metro Weekly. He can be reached at jriley@metroweekly.com
← Previous Story “Cornhole for a Cause” tournament to raise money for SMYAL
Next Story → Stoli partners with DC lesbian artist to launch new bottle honoring Stonewall’s 50th anniversary