Home / News + Politics / Nation / Madonna at GLAAD Awards: “It is every human’s duty to fight, to advocate” for equality

Madonna at GLAAD Awards: “It is every human’s duty to fight, to advocate” for equality 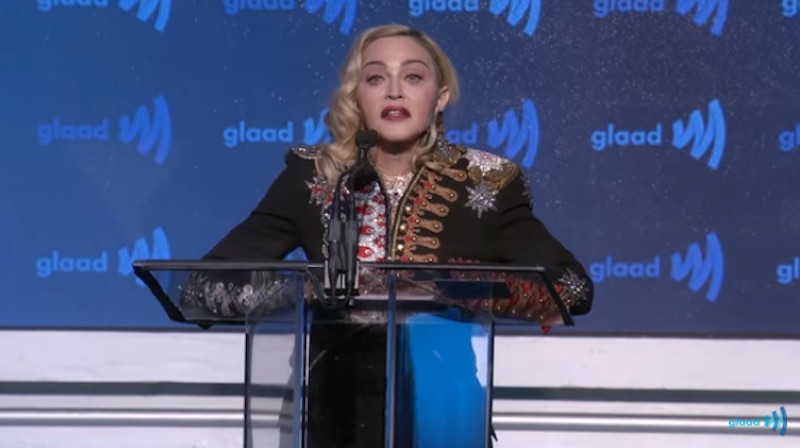 Madonna used her acceptance speech at the 30th Annual GLAAD Media Awards in New York City on Sunday to encourage people to fight and advocate for LGBTQ rights.

Reflecting on her own longstanding advocacy for LGBTQ rights, Madonna explained the importance of fighting for equality, saying in her closing statement, “As soon as you really understand what it means to love, you understand what it takes to become a human being, and that it is every human’s duty to fight, to advocate, to do whatever we can and whatever it takes.”

Madonna was an early and outspoken advocate for safer sex practices, particularly among gay men, who were one of the hardest hit by the HIV/AIDS epidemic. She performed at AIDS benefit concerts, created a benefit dance marathon, and demanded action and funding from government actors.

Madonna also included a leaflet in her alum Like A Virgin entitled “The Facts about AIDS” in order to inform her fans about the disease and how to prevent it. In 1991, she released the documentary Truth or Dare which showed her dancers, who were almost all gay, as they were in real life, encouraging them to depict themselves authentically on camera — something she also referenced in her speech.

Casting her various advocacy on behalf of the downtrodden, disenfranchised, and marginalized as “freedom fighting,” Madonna reflected on, just as she had on the domestic level, how she advocated on behalf of those suffering from AIDS in Malawi, the country from which she adopted four of her six children.

Throughout the years, Madonna has protested the Boy Scouts of America’s ban on LGBTQ adult counselors, spoke at the Women’s March on Washington in support of women’s equality, and denounced the Trump administration’s child detention policy. She has also called out anti-LGBTQ laws abroad — including in Malawi, where two gay men who had been imprisoned for marrying in 2010.

“As a matter of principle, I believe in equal rights for all people, no matter what their gender, race, color, religion, or sexual orientation,” Madonna said in a statement at the time. “This week, Malawi took a giant step backward. The world is filled with pain and suffering; therefore, we must support our basic human right to love and be loved.”

“No single ally has been a better friend or had a bigger impact on acceptance for the LGBTQ community than Madonna,” CNN anchor Anderson Cooper said as he introduced Madonna along with rapper Mykki Blanco and actress and television personality Rosie O’Donnell.

“Madonna in countless ways has opened doors within this society and industry for queer artists such as myself to shine lighting the way with each of her own personal victories,” said Blanco.

“Madonna has always encouraged every one of us who feels alone to find our tribe,” added O’Donnell. “She wants everyone to know, ‘We love you, we’re here for you, and together we all rise.'”

“Madonna always has and always will be the LGBTQ community’s greatest ally and it is only fitting to honor and celebrate our biggest advocate at GLAAD’s biggest event ever,” GLAAD President and CEO Sarah Kate Ellis said in a statement recognizing Madonna’s accomplishments. “…Her music and art have been life-saving outlets for LGBTQ people over the years and her affirming words and actions have changed countless hearts and minds.”