Buttigieg and husband Chasten are "mindful that every minute of this marriage, we are enjoying a freedom that came to us because of the work of so many others" 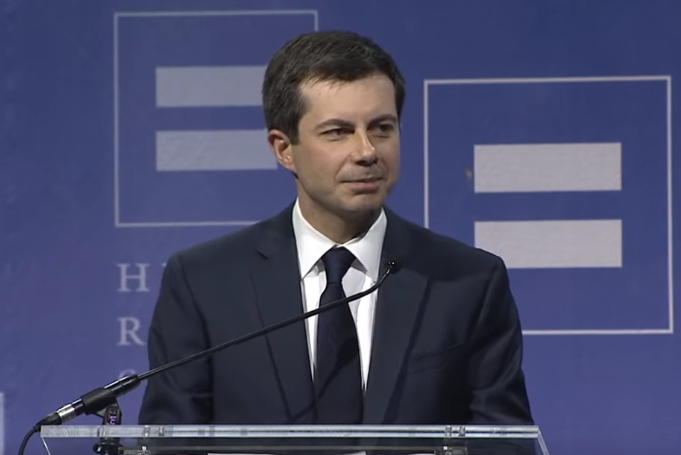 Presidential hopeful Mayor Pete Buttigieg has thanked those who fought for LGBTQ equality in an emotional speech at a Human Rights Campaign Dinner in Las Vegas.

Buttigieg used his speech to share his surprise at the rise of his campaign amid a crowded Democratic field, as well as to recognize those who had worked for the freedoms that allowed him — as an openly gay man, married to husband Chasten Buttigieg — to run a viable presidential campaign.

“I want to reflect on what a remarkable spring Chasten and I are having, and what a testament it is to what can happen in this country of ours,” the South Bend, Ind., mayor said. “We believed that our message was a winning one, so we’re not surprised that our message is resonating, but I’d be lying if I didn’t admit that we’re a little bit surprised too, at the speed of the trajectory that we’re on.

“If you had gone back in time 20 years ago, to find me as an awkward teenager, and told him what 2019 was going to look like, he would not have believed you,” he continued. “If you told him I’d be standing here as a top-tier contender for the Presidency of the United States… and even more amazing, the look on my teenage face if you told him I’d be doing it with my husband looking on.”

Buttigieg then said that he was “so mindful that every minute of this marriage, we are enjoying a freedom that came to us because of the work of so many others.”

Buttigieg also discussed appearing on the cover of TIME magazine alongside Chasten.

The Buttigiegs were profiled for an article on Mayor Pete’s rise among the Democratic candidates for president, with TIME dubbing the couple “First Family” on the cover.

“Ten years ago, the day I first set foot on a Navy base, I could not have served openly in uniform,” he said. “Five years ago, in my home state my marriage could not have existed. And last week, if you happened to pass by a news stand, you could have picked up a copy of TIME magazine with the headline ‘First Family’, and a man and his husband sitting side by side.”

He continued: “That didn’t just happen, it is the fruit of struggle. Political struggle, moral struggle, struggle by people with the courage to make change and faith in the ability of this country to be transformed into a more perfect union.”

Buttigieg also said that, while he “may be part of the LGBTQ community…being a gay man doesn’t tell me what it’s like to be a trans woman of color in that same community, let alone an undocumented mother of four, or a disabled veteran, or a displaced auto worker.”

“But being gay, just like every other fact about me, means I have a story,” he said. “And if I look to that story, I can find the building blocks not only for empathy, but for the impetus for action. The more you know about exclusion, the more you think about belonging, and we have a crisis of belonging in this country.”

Buttigieg also took a swipe at Donald Trump, saying that he doesn’t worry about “the president’s fantasy wall on the Mexican border that will never get built anyway.”

“What I worry about are the very real walls being put up between us as we get divided and carved up,” he said. “And what every gay person has in common with every excluded person of every kind is knowing what it’s like to see a wall between you and the rest of the world, and wonder what it’s like on the other side. The struggle for equality for the LGBT community on everything from workplace discrimination to trans servicemembers’ dignity doesn’t compete with the other struggles of Americans yearning to get to another side of an ugly wall. It reinforces those struggles, and obligates all of us to do everything we can to list one another up. We have to be for each other, no matter what.”

Watch his speech below:

Rhuaridh Marr is Metro Weekly's managing editor. He can be reached at rmarr@metroweekly.com.
← Previous Story Dan Lipinski criticized for being the only House Democrat not to sponsor the Equality Act
Next Story → HRC is “disgusted” that President Trump opposes the Equality Act