By Troy Petenbrink on May 15, 2019 @thegaytraveler 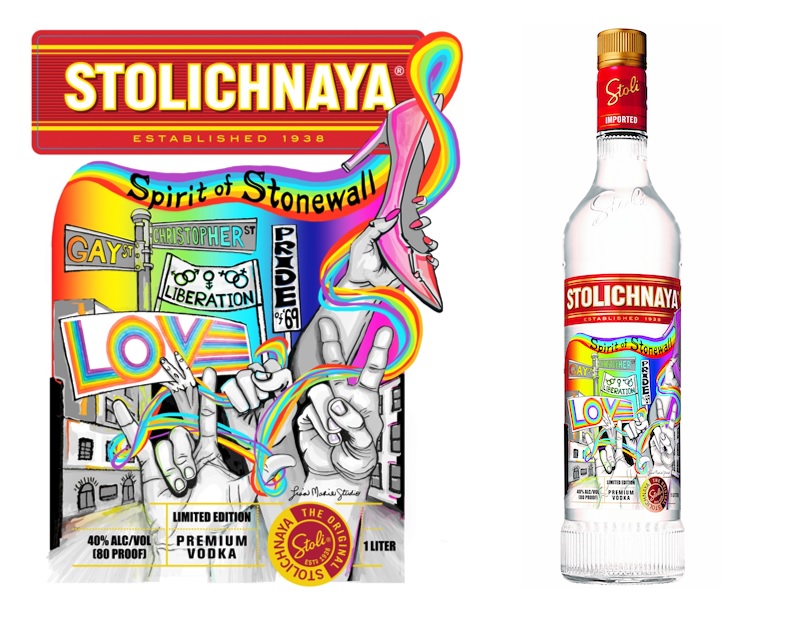 Thalhammer welcomed the opportunity to work with Stoli and help share the often overlooked history of the LGBTQ community in a unique way. The D.C.-based lesbian artist and activist used a mural theme for the bottle’s artwork that she calls Stonewall LOVE.

It incorporates emblematic LGBTQ imagery, including five hands and three protest signs at the corner of Gay and Christopher Streets outside of the Stonewall Inn, a high heel to represent the transgender activists who initiated the 1969 uprising, a sign spelling out “LIBERATION” in reference to the Gay Liberation Front that includes three gender symbols, and a peace sign and protest fist holding a rainbow energy ribbon that swirls between fingers and brings the community together.

On Monday, May 6, Thalhammer joined Stoli in New York City for the new bottle’s official reveal during a special reception at The Stonewall Inn.

The limited edition design will help raise funds for the “Stonewall Inn Gives Back Initiative,” which seeks to eliminate the social intolerances that profoundly impact the lives of LGBTQ citizens in America and abroad through awareness campaigns, educational programming, fundraising, and public dialogue.

Consumers will be able to purchase a Spirit of Stonewall bottle at select retail outlets beginning later this month.

Meanwhile, Thalhammer is painting an interior wall mural based on the Spirit of Stonewall bottle artwork for XX+ Crostino at 1926 9th St. NW. It’s scheduled to be completed by June 20.

Troy Petenbrink is Metro Weekly's contributing writer for food and travel. He can be reached at thegaytraveler@gmail.com.
← Previous Story Baltimore LGBTQ business’s Gay Pride flag burned in apparent hate crime
Next Story → Gallery: May Is All About Trans Art Exhibition