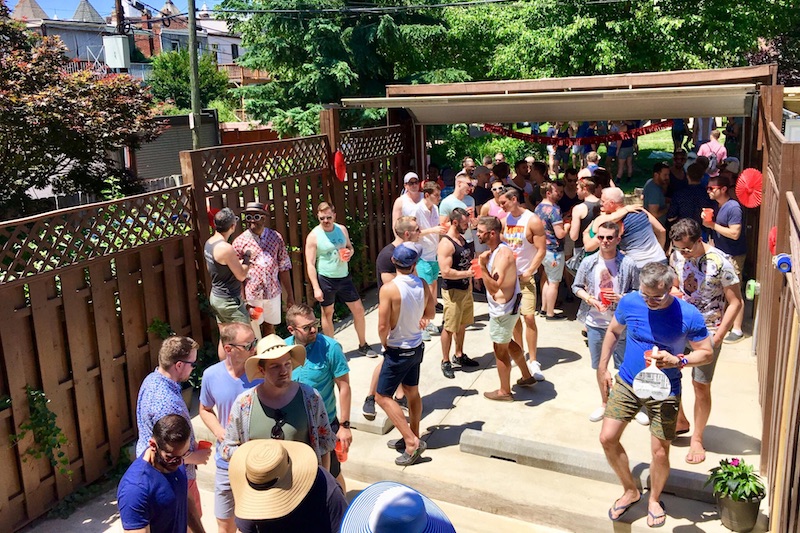 Want to pick up your celebration where Capital Pride left off? Consider going to the fourth annual “Pride at the Park,” at Crispus Attucks Park in D.C.’s Bloomingdale neighborhood.

Hosted by BloominGays, a six-year-old community group that regularly hosts get-togethers for LGBTQ people and allies in the neighborhood, including monthly happy hours at local bars, Pride in the Park initially started as a single house party, but quickly expanded as more residents whose houses surround the privately-operated park began opening up their homes to revelers.

The event is a “traveling party” of sorts, with certain houses being open to the public during certain times within the four-hour window. Attendees receive a commemorative cup, and will be directed to the various host houses surrounding the park throughout the course of the day,.

Typically, about 350 people attend the event each year, and 300 tickets have been sold thus far. Tickets are $30 per person, and can be purchased by visiting the BloominGays website.

Half of all proceeds will go to the development corporation, with the remaining half being split among SMYAL, The DC Center for the LGBT Community, and Casa Ruby.

“Its our biggest event each year,” says Josh Siegel of BloominGays, one of the event’s chief organizers, whose residence was the site of the original house party. “It’s a good time for people, not just from the neighborhood but the whole city, to come together and have a good time celebrating Pride.”

The fourth annual Pride in the Park, hosted by BloominGays, is on Saturday, June 15 from 1-5 p.m. at Crispus Attucks Park. Tickets are required. For more information, including a check-in time and location, visit www.bloomingays.com.

John Riley is the local news reporter for Metro Weekly. He can be reached at jriley@metroweekly.com
← Previous Story DC Center hosts discussion for trauma survivors in wake of Capital Pride Parade disruption
Next Story → Three arrested for attacking gay couple on U Street early Sunday morning