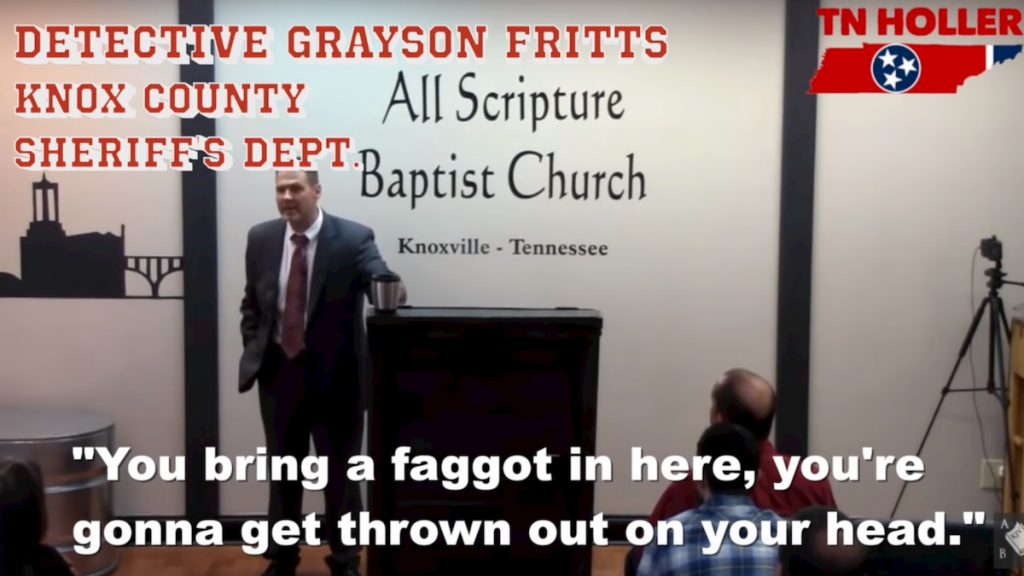 A Tennessee police detective has been placed on leave after giving a church sermon where he said LGBTQ people should be executed.

Knox County Detective Grayson Fritts, who is also a pastor at All Scripture Baptist Church in Knoxville, was exposed after video of his sermon was posted to YouTube, the Knoxville News Sentinel reports.

In the video, Fritts repeatedly tells his congregants that he hates homosexuals, and refers to LGBTQ people as “freaks,” “animals,” and “sodomites.”

Fritts also said that he believes government officials should “enforce Leviticus” by arresting and then “speedily” executing LGBTQ people, arguing that the Bible “[drives] home the death penalty for someone being a homosexual.”

“They are worthy of death,” Fritts told his congregants, adding, “God has instilled the power of civil government to send the police in 2019 out to the LGBT freaks and arrest them and have a trial for them, and if they are convicted, then they are to be put to death.”

Fritts said he was “sick of sodomy getting crammed down our throats,” referencing singer Taylor Swift’s efforts to protest and draw attention to Tennessee Republicans and their attempts to pass anti-LGBTQ legislation.

He continued: “It’s infecting our nation, people…. The culture’s changed. The Bible is not outdated.”

Fritts also slammed Christians who defend LGBTQ people, saying that just because people watch Queer Eye, Disney movies, and “these freaks on TV,” they shouldn’t go “soft on the homos.”

He further stated that gay people are easy to spot, because they are in grocery stores being “flamboyant” and “walking around like a bunch of Twinkies.”

He also ranted about LGBTQ people working in hairdressers and department stores.

“Ladies, hey go get the highlights in your hair by some homo,” he said. “Hey, go get your makeup done at the makeup counter at the mall and see some tranny freak…. Some twinkletoes that’s walking over there, and he’s handing you your Clinique makeup.”

Fritts also complained about going to a fast food chain and “there’s some filthy homo working the counter.”

“You buy a hamburger, and he puts it on the tray,” he continued, “and I don’t even know that I would eat it to be honest with you.”

Fritts also turned his attention to Pride parades (it’s notable that his sermon took place on the first weekend of Pride month).

“Man, hey call the riot team, we got a bunch of them,” Fritts said. “We have a bunch of them we’re going to get convicted because they have all their pride junk on, and they’re professing what they are, that they’re a filthy animal.”

Fritts has since been removed from active service, with Knox County District Attorney General Charme Allen stating that her office will review all pending cases that Fritts is involved in.

Speaking to the Washington Post, Allen said that a prosecutor would be assigned to cover any complaints that may be received regarding his previous cases.

“I find this speech personally offensive and reprehensible,” Allen said. “As District Attorney, my constitutional obligation is to protect the integrity of the justice system.”

In a statement to the News Sentinel, Sheriff Tom Spangler said that Fritts had recently taken a county buyout offer, and his paid sick leave would run until the July 19 offer takes effect.

“I want to be very clear,” Spangler said, “that it is my responsibility to ensure equal protection to ALL citizens of Knox County, Tennessee under the law, my oath and the United States Constitution without discrimination or hesitation. Rest assured that I have and will continue to do so.”

“The symbolism is extremely palpable considering it is Pride Month and the anniversary of the Orlando pulse shooting,” Sanders said. “We hope that there is a thorough quick investigation of this Knox County employee, and if all the facts are confirmed, he should not be in law enforcement.”

“This Knox County Sheriff’s detective is preaching about murdering LGBTQ people,” Cooper wrote. “There is no ambiguity. There is no confusion. He is suggesting the execution of our friends and neighbors.”

Let’s be very clear. This Knox County Sheriff’s detective is preaching about murdering LGBTQ people. There is no ambiguity. There is no confusion. He is suggesting the execution of our friends and neighbors. https://t.co/ukpSVewXBM

“I strongly condemn threats of or calls for violence,” he said. “On an official level, I have the utmost confidence that Sheriff Spangler along with District Attorney Allen will handle this issue in a professional and appropriate manner.”

Speaking to WVLT, Fritts defended his words, saying his beliefs hadn’t impacted his ability to do his job as a detective.

“If I worked at the Burger King and somebody from the LGBT community came in and they ordered a hamburger, I would make them a hamburger because that was what my job would be,” he said. “Even if I felt differently towards that person and felt exactly what I feel and believe, I would still do my job.”

Watch an edited version of Fritts’ comments, compiled by the Tennessee Holler, below:

Rhuaridh Marr is Metro Weekly's online editor. He can be reached at rmarr@metroweekly.com.
← Previous Story 62% of Americans say they’ve become more supportive of transgender rights over past 5 years
Next Story → Taylor Swift celebrates LGBTQ people, GLAAD, and slaps down homophobia in new song “You Need To Calm Down”