Capital Pride 2019: The Parade may have ended abruptly, but DC’s LGBTQ community vows to keep celebrating

Pride-goers describe the chaos as false reports of a shooting spread through the crowd: "Everyone was just running. It looked like a movie scene." 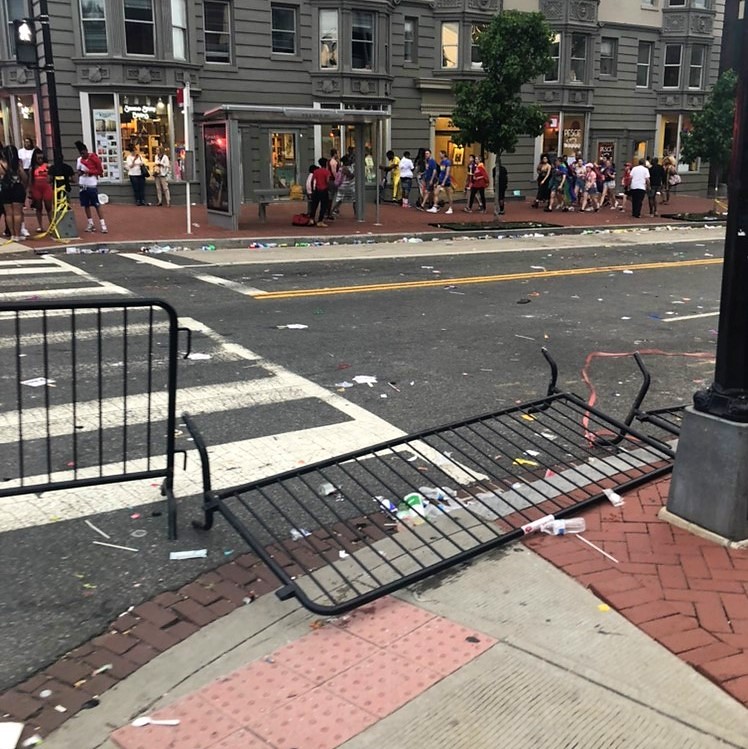 The annual Capital Pride Parade came to an abrupt end on Saturday, after false reports of an active shooter in Dupont Circle spread through the thousands gathered to celebrate D.C.’s LGBTQ community.

While police arrested one man who was found with a firearm in his proximity — and confirmed that no gunshots were fired — the panic of a potential shooting ripped through Pride-goers like a wildfire, sending people crashing over barriers, running down sidewalks, and diving into nearby buildings to escape the perceived threat.

Videos from the day show hundreds fleeing through streets around Dupont Circle, the result of which left seven people hospitalized with minor injuries and several more treated at the scene for injuries sustained during the rush to leave Dupont.

The aftermath of the chaos was visible, as the ground was littered with lost phones, banners, trash, and even shoes that were left behind as people began running away from Dupont Circle. 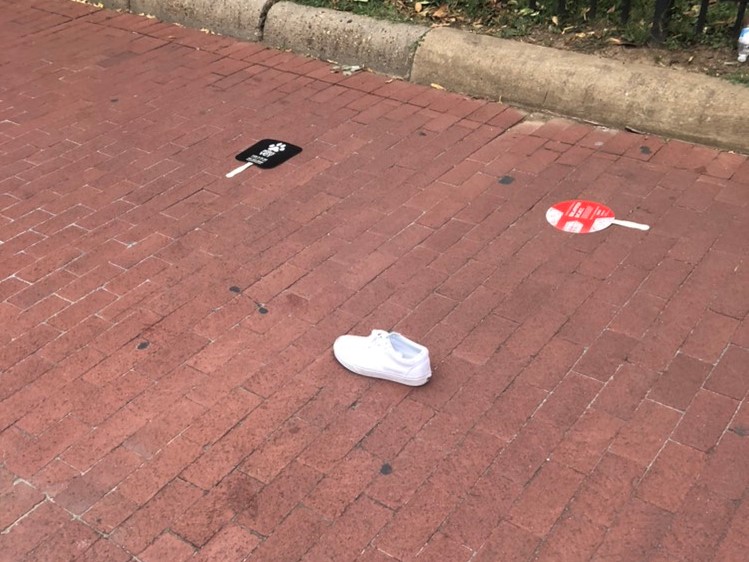 Elizabeth Hernandez, 19, of Falls Church, Va., said she lost track of her friends in the melee.

“There was a little girl on the ground, so I picked her up and ran with her a little bit. Her mom was right next to me, so I gave her to her mom,” she said. “And this man started pushing me into a restaurant, and I fell. I got pushed into a bathroom. The door wouldn’t lock, but I have my pepper spray [around my neck], and everybody was very helpful and we were all trying to be supportive, because it was very scary. We stayed in about five minutes after, even though we were given the all clear.”

Following the initial all clear, word of the shooting spread by word-of-mouth, setting off a second mass of people running from New Hampshire Avenue NW and Dupont Circle, around the corner to P Street and then around another corner onto 21st Street NW.

Hernandez said she was inside another restaurant when she saw the second mass of people.

“Everyone was just running. It looked like a movie scene,” she said. “The second time, I just thought, ‘We need to get out of the circle.'” 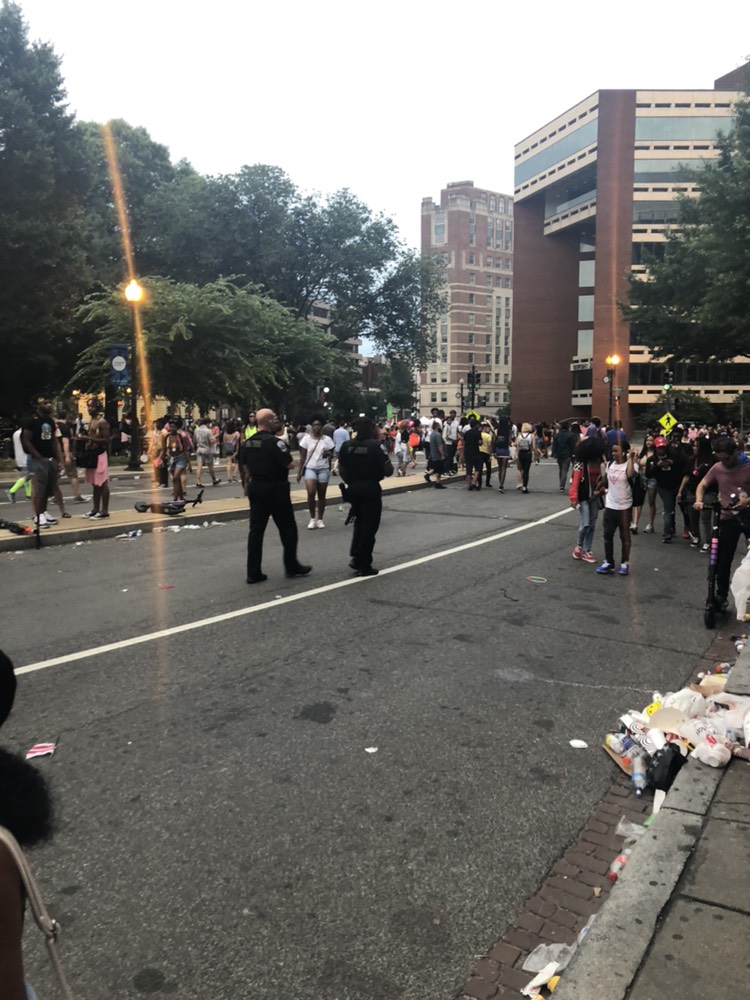 Hernandez was later treated by EMTs for what she believes will turn out to be a sprained ankle sustained during the chaos. But despite the saddening and abrupt end to the parade, she said she’ll still come back in future years.

“I’m not gonna be not gay because something happened,” she said.

Michael Loyola, 36, of D.C., was standing on P Street NW across from CVS pharmacy on the circle’s western edge when he heard a loud commotion.

“I just saw people running away, yelling. Everybody around me stopped, and said ‘What’s going on?'” said Loyola. “People started saying, ‘It’s a shooting, it’s a shooting.’ So we all freaked out and ran away.”

Loyola and fellow parade-goers crouched behind the small building at 9 Dupont Circle NW that serves as a bus stop for charter buses.

In the chaos, he lost his phone, and had look for a landline to call his partner and let him know he was all right.

Dana Montfort, an EMS technician from Southern Maryland, was standing with her friend, Christian Holloway, just behind a barrier on the southwestern side of Dupont Circle Park, across from the CVS, when the chaos broke out. 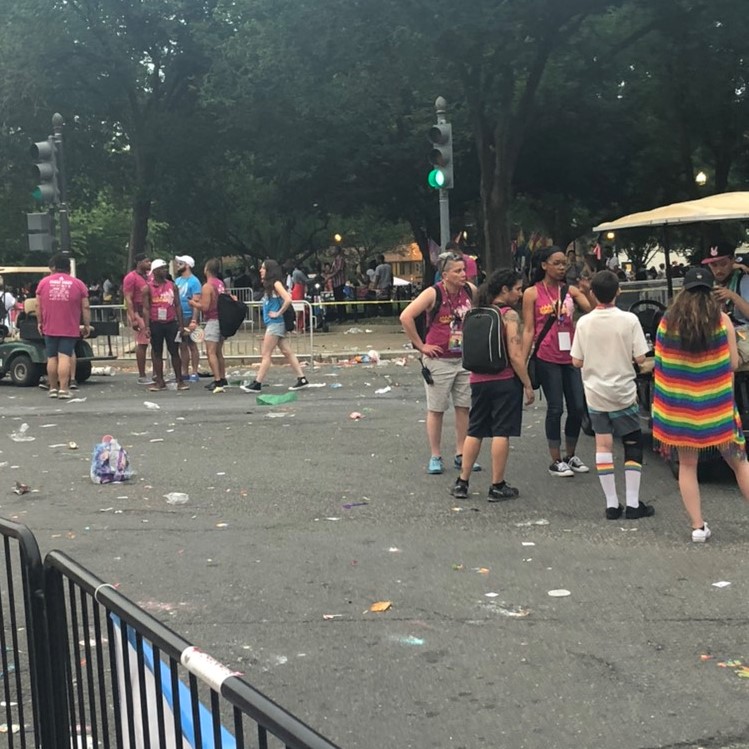 “We were enjoying the parade, and we heard about five or six pops,” Manafort said. “We turned around in the direction where the pops came from. Everybody was screaming, and it was coming from the middle of the circle, by the statue. Everybody started running, the fences were coming down, people were screaming, we followed the rest of the crowd down to New Hampshire Avenue, and as we’re running, we hear five or six more pops.”

Once they had avoided getting crushed by the terrified onlookers, Montfort and Holloway, who is also an EMS technician, returned to the circle and began helping out some of the first responders.

“People were on the ground,” Montfort said. “We found one guy who wasn’t able to walk. His foot was messed up. We started triaging him. EMR [Emergency & Medical Rescue] was here very quickly, we identified ourselves as EMS, he threw us [latex] gloves, and we’ve been helping them triage all night.”

Montfort said she treated some broken legs or broken ankles, some of which were caused by falling parade barriers when the crowd surged forward to get away from the circle. The other injuries appeared to be largely people who had been trampled in the chaos. There were no life-threatening injuries.

“Everyone had dispersed immediately, and we saw the people lying on the ground. And we just ran over to whoever we could find first and started helping,” she said. “The brother of the first victim we found, the one with the foot injury, he was maybe about 12, and he was bawling. And I was like, ‘Oh my God, is he injured, too?’ And his brother’s like, ‘No, it was his first Pride,’ his sister had brought him with the older brother…and he was just scared beyond belief. The fear in his face is something I won’t forget.”

Montfort said while she was helping with the injured, she heard mixed and conflicting reports from EMS and police alike about whether there was or wasn’t a gun, the nature of the disturbance, and what had initially sent the crowd into a panic. 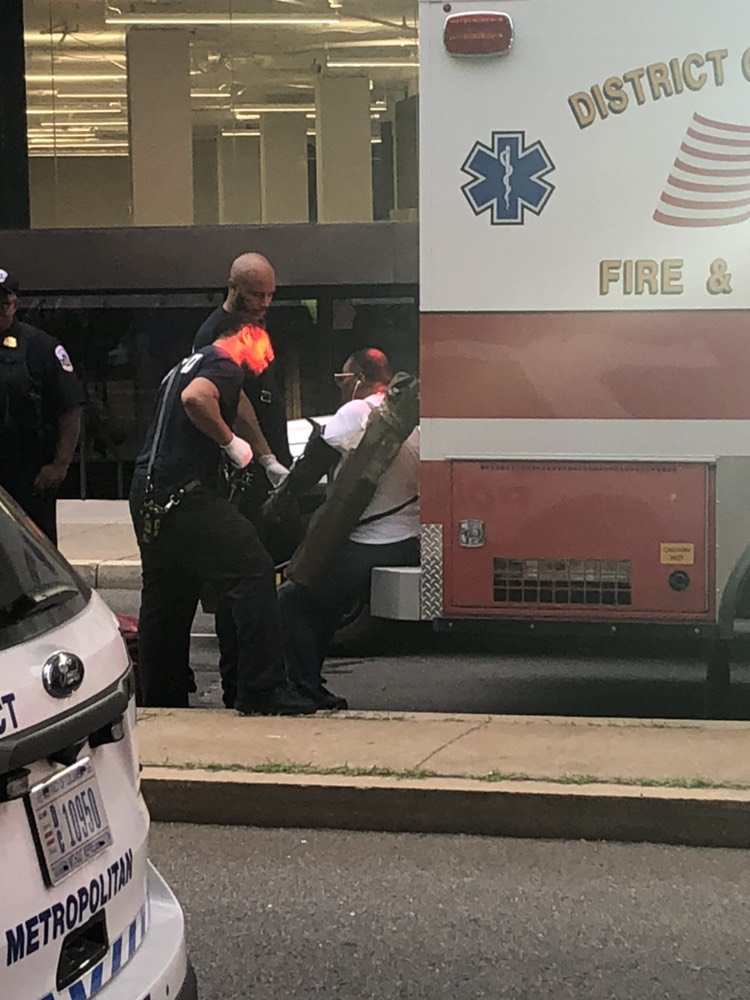 Ananikay Nelson, 25, was by the PNC Bank on the northern edge of the circle and believed the parade had ended around 7:20 p.m. because there was a large gap of time in between floats. Then, people began pushing over the barricades lining the circle.

Nelson said she didn’t hear any gunshots prior to the large stampede. She said she was sad that the rest of the parade couldn’t continue.

“I was really enjoying it, I’ve got my beads, my bracelet saying ‘Love Means Love,’ but what can we do about it? We just gotta move forward,” she said.

Nelson also said that she won’t be deterred from going to other Pride events: “I’m going to celebrate the whole month.”

John Riley is the local news reporter for Metro Weekly. He can be reached at jriley@metroweekly.com
← Previous Story Reports of gunshots lead to panic at Capital Pride Parade, police confirm no active shooter
Next Story → AIDS Walk & Music Festival Baltimore raises more than $150,000 for HIV services