One man has been arrested for possession of a firearm, with police confirming no shots were fired 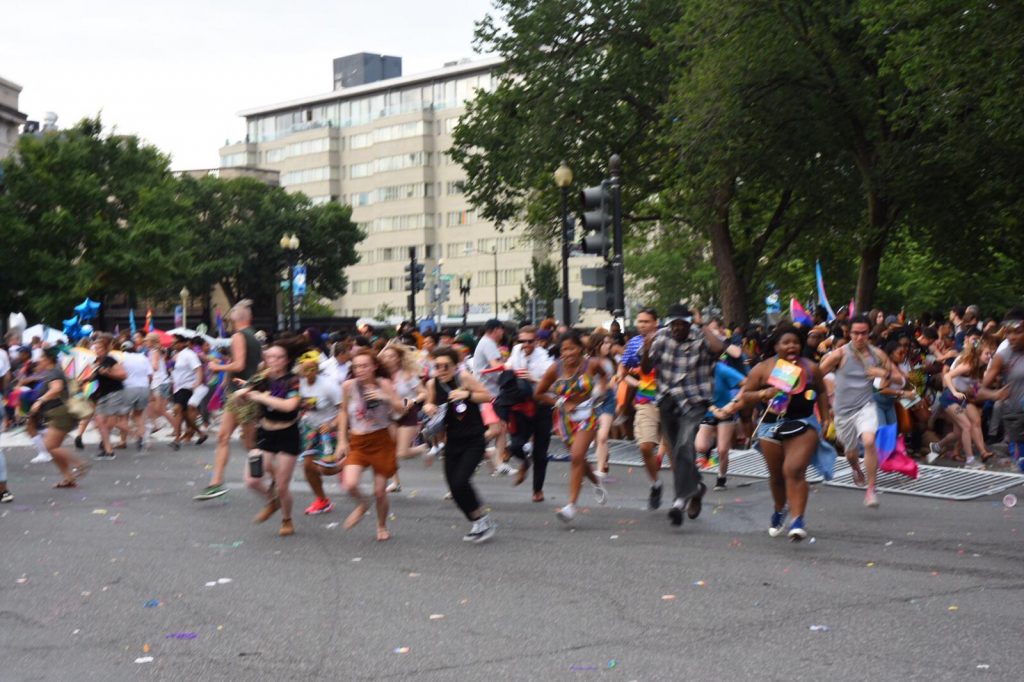 Reports of gunshots in Dupont Circle led to mass panic at the Capital Pride Parade on Saturday, June 8.

Videos on social media show pride-goers trampling barriers and running into nearby buildings after alleged gunshot sounds in the vicinity of the Dupont Circle fountain, though police have confirmed that there was no active shooter present.

D.C. Police said that there was no shooting, but that a gun was recovered from a backpack in the area.

Police said the gun was not “brandished,” that it had been recovered and was being processed, and that one person was being questioned.

Guillermo Rivera, Commander of MPD’s Special Operations Division, confirmed in a press conference that a man has been arrested for possession of a firearm. Rivera said it “appears to be a handgun.”

Police are still investigating exactly what led to crowds fleeing the area amid reports of an active shooter, and urged any eye witnesses or anyone with video of the event to come forward.

Rivera said that at 7:20 p.m., officers responded to reports of a man in Dupont Circle with a gun. They then encountered “a crowd of people running” from the individual’s reported location.

“Some of the individuals in the crowd said that there was a man with a gun and that someone had fired shots,” Rivera said. “Officers arrived at the location where the individual was located — at that point, they stopped that individual and they recovered a gun close by.”

Rivera added that there was “no evidence at all that any shots were fired.”

“At this point this is still under investigation as to what actually occurred with the individual and the people that were running,” he said. “But there is no evidence of any shots being fired, or anyone being injured as a result of the gun that was recovered.”

Rivera also responded to reports on social media of several loud bangs in the area, assumed to be gunshots.

“We had officers close by and at this point there’s no evidence of any gunshots,” Rivera said, adding: “Right now we’re still reviewing any video that’s available and any witness reports that come up to see if we can determined what the sound actually was.”

Rivera also said that a second person, a woman, was arrested at the scene for assaulting a police officer. He did not yet know if the woman was connected to the man with the gun, or what other charges she will face.

He also said that there was no evidence as of yet of any threats made against Capital Pride or the Parade, but that the police investigation was still ongoing.

People running away from rumors of active shooter. Not confirmed. Repeat: nothing confirmed yet. Just rumor at this point, but people are on edge. #CapitalPride pic.twitter.com/ZhM8tMwbLV

D.C. Fire and EMS reported to the area after reports of injuries, which reportedly were caused by crowds of people rushing from the area.

Kevin Donahue, Deputy Mayor for Public Safety and Justice, tweeted that there was “NO Active Shooter at Dupont Circle,” but said that there were injuries “from people running from what they thought were gunshots.”

Mayor Muriel Bowser said she was being “briefed by MPD about the situation” in a tweet, and reiterated that there “is NO active shooter.”

#PrideDC: I am being briefed by MPD about the situation at Pride, but please spread the word that there is NO active shooter. https://t.co/5YMBDjU7dJ

From her personal account, Bowser tweeted that there were “no shots fired” and there was “no active threat.”

I have been briefed by @DCPoliceDept Chief Newsham about the incident at #CapitalPride. @dcfireems is on the scene to treat minor injuries / due to reports of a shooting. There were no shots fired, and there is no active threat.@DCPoliceDept will provide further updates. https://t.co/ngLLbHVzKV

They added that police were “on site and the threat has been contained” in a tweet.

The Block Party on 15th and P St. will go ahead as planned, as will a Pride event at City Winery, Capital Pride added.

The parade has ended. The Block Party on 15th And P St. is still happening as well as City Winery. The police asks that everyone on Dupont Circle evacuates. Be safe. The police is on site and the threat has been contained.

Video on social media showed pride-goers running through the streets around Dupont Circle, with individual reports of people trying to enter apartment buildings, hotels, and businesses to get off the streets.

#DCPride #CapitalPride #shooting Marching in the Gay Pride parade in Washington DC. As my girlfriend and I were walking past Dupont Circle, apparently someone started shooting. I did not hear the shots, but caught the moment of the stampede. People went quickly from smiling, pic.twitter.com/oPQdIrM3dG

#BREAKING #GayPride in #DC participants run in panic after rumors of shooting spread in the crowd pic.twitter.com/OmKlox3wfj

During the panic at #CapitalPride sheltering in place in the basement of the @DupontCircHotel before we're knew reports of an active shooter we're false. pic.twitter.com/1OEuh74nLH

Rhuaridh Marr is Metro Weekly's managing editor. He can be reached at rmarr@metroweekly.com.
← Previous Story BYU’s Matt Easton is out, proud, and heading to Capital Pride
Next Story → Capital Pride 2019: The Parade may have ended abruptly, but DC’s LGBTQ community vows to keep celebrating