A Republican state representative from Florida is apologizing after being harshly criticized for laughing in response to a suggestion that gay people should be put to death.

State Rep. Mike Hill (R-Pensacola) came under fire after audio was released of a May 23 talk in Pensacola addressing members of the group Women for Responsible Legislation, which purports to be nonpartisan.

During his remarks, Hill said he was told by God to file a bill banning abortion with almost no exceptions, similar to legislation in Alabama.

He also said an oath taken on anything but the Bible isn’t valid, and questioned whether the judicial branch should have the right to rule if laws are unconstitutional.

Hill was then asked why a fellow Republican co-sponsored the Florida Competitive Workforce Act, which would prohibit discrimination against LGBTQ people. He responded that he didn’t know why any Republican would co-sponsor such a bill, but that the measure doesn’t reflect the values of his Northwest Florida constituents.

He also said he thought being gay was a choice and not worthy of protected status, reports the Pensacola News Journal.

An audience member then said: “In 1 Corinthians, it says that a man who has an affair with another man will be put to death.” Hill laughed, replying: “It says that in the Old Testament, too.”

Another person then asked Hill if he would introduce legislation to put gay people to death. Hill laughed again, remarking: “I wonder how that would go over.”

The remarks sparked outrage from the LGBTQ community once they were published, and after the Pensacola News Journal uploaded audio of the exchange.

“Words matter,” Brandon Wolf, a survivor of the 2016 mass shooting at Pulse nightclub in Orlando and media relations manager for Equality Florida, said in a statement. “The comments made by Rep. Mike Hill this week are both deeply disturbing and dangerous. Rep. Hill should be embarrassed and ashamed for laughing along with the suggestion that he file legislation requiring the execution of LGBTQ people.”

“I’m shocked and disgusted to discover a colleague who I’ve worked closely with would joke about punishing me by death for being gay,” Smith wrote on Twitter. “As a survivor of anti-gay hate violence, I know the consequences of homophobia are real.”

I’m shocked & disgusted to discover a colleague who I’ve worked closely with would joke about punishing me by death for being gay. As a survivor of anti-gay hate violence, I know the consequences of homophobia are real. @MikeHillfl should apologize to LGBTQ Floridians or RESIGN. https://t.co/BqMoxLc6Vo

Smith followed up his initial criticism with subsequent tweets, noting that he had partnered with Hill on a bill to ban greyhound racing in Florida last year.

“To add insult to injury, I joined forces with @MikeHillfl last year to protect greyhound racing dogs. Apparently, he thinks DOGS deserve protection, but not LGBTQ people. Those are his priorities. How insulting….” Smith tweeted.

“What was [he] thinking when we taped this greyhound dog protection video? Was he thinking I should be stoned to death as a gay man? Was he thinking DOGS deserve more protection than LGBTQ people like me? How can he espouse such bigoted views and work alongside me?”

What was @MikeHillfl thinking when we taped this greyhound dog protection video? Was he thinking I should be stoned to death as a gay man? Was he thinking DOGS deserve more protection than LGBTQ people like me? How can he espouse such bigoted views and work alongside me? pic.twitter.com/VFWhH2KDl5

“Such callous indifference to an outrageous question is unacceptable, runs contrary to our founding principles, and in no way reflects the beliefs of the Florida House,” the statement said.

Fellow lawmaker James Grant (R-Tampa) also criticized him, tweeting: “Nothing about this ‘exchange of jokes’ is conservative let alone Christian. As a Christian who unapologetically believes in religious liberties, this exchange is nothing short of theocratically fascist, unconscionable, and indefensible.”

Nothing about this “exchange of jokes” is conservative let alone Christian.

As a Christian who unapologetically believes in religious liberties, this exchange is nothing short of theocratically fascist, unconscionable, and indefensible.https://t.co/LI2fKZzvsl

Even Gov. Ron DeSantis (R), no friend to the LGBTQ community during his years in Congress, said he supported Oliva’s comments and trusted him “to take whatever action is necessary.”

Initially, Hill resisted calls that he apologize, saying in an interview on NewsRadio 92.3 on Monday: “Why should I issue an apology for something I didn’t say, do or even think of?”

He promised to issue a statement pushing back against the suggestion, promising to call it “disgusting and a terrible thing to even suggest.”

While his eventual statement did not use those words, he did apologize for the “tone” he took in his response and the fact that the premise of the question was inaccurate.

“As everyone already knows, I am a Bible believing Christian,” Hill said in his statement. “I am publishing this press release to address the controversy that arose over a question recently asked at an event sponsored by Women For Responsible Legislation in Pensacola.

“Specifically, one man that I had never met said the Bible in 1 Corinthians calls for a man having an affair with another man to be put to death. If the man was referring to 1 Corinthians 6:9-10, that text says nothing about anyone being put to death. It simply states people who practice various sins will not inherit the kingdom of God.

“I apologize for not directly responding to the fact that the premise for this question was inaccurate. I deeply regret how the tone of my response to a constituent was received at this event,” Hill continued. “I believe that no matter one’s race, sexual orientation, religious affiliation, economic status or otherwise, that all lives are created equal in the image of God. I served in the U.S. Air Force to protect the many freedoms we have in the United States for all Americans.” 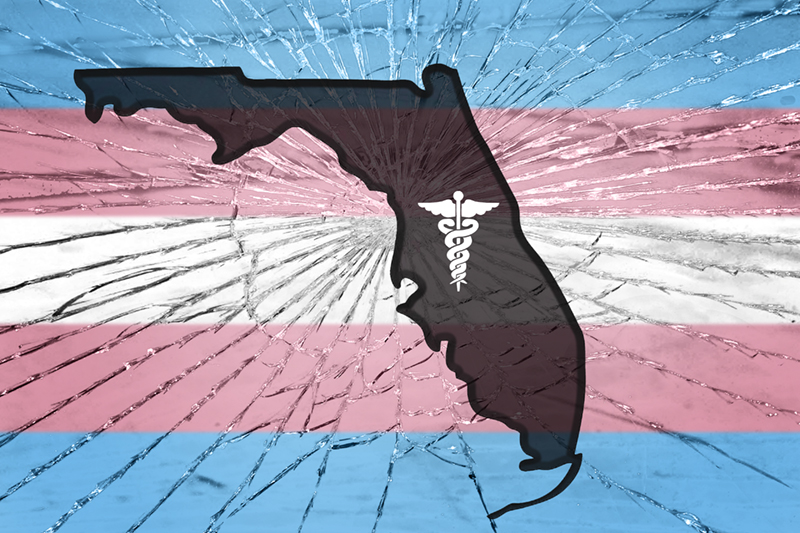 State Rep. Randy Fine (R-Palm Bay) wants to "shepherd legislation" in 2023 that would charge doctors who provide surgery or prescribe drugs that aid in a gender transition with "felony child abuse," and yank their license to practice.

"If an adult wants to self-mutilate in pursuit of the fiction they can defy G-d and science, more power to them -- as they don't expect me to pay for it. But no child should be put in the position of making life-altering decisions before they are of the age of majority," Fine tweeted.