Forum: The Spark of Stonewall

A half-century ago, the author was in New York City as the Uprising took hold, creating a movement

As I wandered among the crowd at the Dyke March during DC Pride weekend, grateful that the crisis over Jewish participation and Zionist iconography had been resolved, I was struck by a number of feelings. I had been celebrating these moments in public for twenty-five years, and the edginess had transformed into comfort — and, I will admit, some boredom. I saw familiar faces, old veterans, and new families, as well as some first-timers who were visibly thrilled to be present. And that was just the Dyke March on Friday night, not the much larger Pride Parade the following afternoon.

The most profound feeling, though, was the gratitude I felt for just being alive, to both observe this moment and experience it. In the new Netflix reunion series of Armistead Maupin’s Tales of the City, Ysela (Daniela Vega, of A Fantastic Woman fame) asks Anna Madrigal (Jen Richards, in a 1966 flashback of the Olympia Dukakis character) how she, Ysela, a 26-year-old, will be able to survive to age 40 as Anna has done. She states that, in her community in San Francisco, trans women rarely live to that age.

My sense is that is still too common a feeling today, but more people than ever are alive and out. It was not hard for me during Pride to flash back to that Saturday night, a half-century ago, on June 28, 1969, when I was on Seventh Avenue in lower Manhattan during the Stonewall Uprising. My panic tinged with exhilaration then, in contrast to unadorned satisfaction today. My memories are in black and white (it helps that it was night), while the images today during Pride are in OLED-quality color. The lights of sirens, street lights and trash-can fires in the black night contrast with the vivid polychrome parade-goers of today. I can see that night, and still even feel it, but I now find them hard to grasp, the way the aging vets of the Uprising appear increasingly incorporeal during their interviews.

I suppose all history is like that, particularly when you not only lived in the time under consideration but were present at the events. I was in awe of the veterans who visited the beaches of Normandy this year, and I feel the same way about those who not only had enough that night in 1969 to do something about it, but were willing and eager to organize and channel that frustration to create a movement.

One irony is the profusion of articles about the anniversary in The New York Times, my hometown paper. Today they can’t seem to publish enough — fifty years ago, they didn’t report on the Uprising until two days later. But, critically, they did report, and it was the first time the national media took significant and persistent note of the LGBTQ community.

That’s why Stonewall is considered the beginning — it was the first time America became aware of something that was more than a local melee. Cooper’s Donuts, Compton’s Cafeteria, the Black Cat, Frank Kameny and friends in front of the White House — all were important, but their actions didn’t reverberate across the country. Stonewall did, and was then branded as “the first.” So now it is.

“Stonewall is considered the beginning. It was the first time America became aware of something that was more than a local melee.”

As an accidental veteran of that spark — one who has long been in awe of the Anna Madrigals and Yselas who lived their truth back during dark days, and is grateful to be alive, having lived through a personal trauma when it was literally touch-and-go for me — this last half-century means a great deal to me. I’m glad I chose to live. I’m glad I found the strength to survive and personally rise up and contribute. And as a Jewish woman whose ancestors dreamed of return and liberation and freedom for two thousand years, I’m stunned by the rapidity and tenacity of the progress over the course of my lifetime.

We in America are living through dark days, but they are dark for all Americans, not just the LGBTQ community. Yes, the trans community, in particular, is often singled out for hateful rhetoric and discarded guidance and regulation. But our legal advocates are handling those federal actions, the law is still on the side of a majority of LGBTQ Americans, and while our movement leaders need to do a better job countering the hate speech, we have a lot more friends than ever.

It has been noted that the “gay rights movement” has been more successful in a shorter period of time than any other civil or human rights movement. It’s an interesting question as to why, but that question doesn’t change the fact that it has happened and is real. There are still problems, some severe in a number of our sub-communities, but we’re able, with sufficient will, to tackle them today because of the journey that led to this moment.

We should thank the men and women who first organized in the dark in the ’50s and ’60s; the men who composed the Gay Liberation Front and Gay Activists Alliance and, with all their faults, created a movement; those who had homosexuality and then gender identity disorder excised from American psychiatry, and then the law; and the women who nursed the ill and dying and rose to community participation and leadership.

Finally, thank the trans women who pushed back against our future allies at the inception, and then created their own street presence which became a movement in the next generation, joining the greater gay community and rising to advocate on the Hill and in state legislatures — and even join a legislature and council in recent times.

As a result, fifty years after Stonewall, and 45 years after a limited version was first introduced, the House of Representatives passed a revision to the 1964 Civil Rights Act to add the queer community to its protections.

That it was a no-brainer is testament to the distance we’ve traveled from Stonewall.

Dana Beyer is the recently retired executive director of Gender Rights Maryland. She has served on numerous regional and national LGBTQ boards, led the campaigns to pass the Maryland gender identity bills, and was instrumental in having Gender Identity Disorder removed from the DSM in 2011. She can be reached at danamd@danabeyer.com. 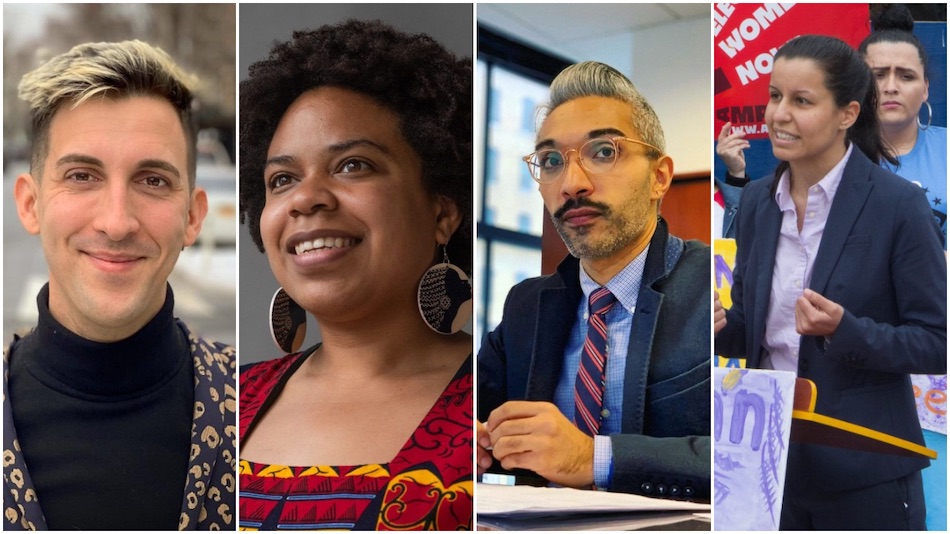 New York City voters could potentially elect up to nine new LGBTQ people to the City Council this year, nearly doubling the previous record for the most number of out LGBTQ members to ever sit on the city's chief legislative body.

In total, at least 16 out LGBTQ candidates sought office by running in the Democratic primary for City Council, with several other candidates seeking either city- or borough-wide office.

The current four out LGBTQ members of the Council -- Speaker Corey Johnson (D-Manhattan), Daniel Dromm (D-Queens), Jimmy Van Bramer (D-Queens), and Carlos Menchaca (D-Brooklyn) -- are term-limited, and former Council member Ritchie Torres (D-Bronx) was elected to Congress last year. Johnson is seeking to be the city's next comptroller, and Van Bramer is seeking to be Queens Borough President.