Home / Arts + Entertainment / Film / Film Review: Once Upon a Time in Hollywood

Film Review: Once Upon a Time in Hollywood

Quentin Tarantino offers a fascinating, pop culture-soaked paean to the sixties with "Once Upon a Time in Hollywood." 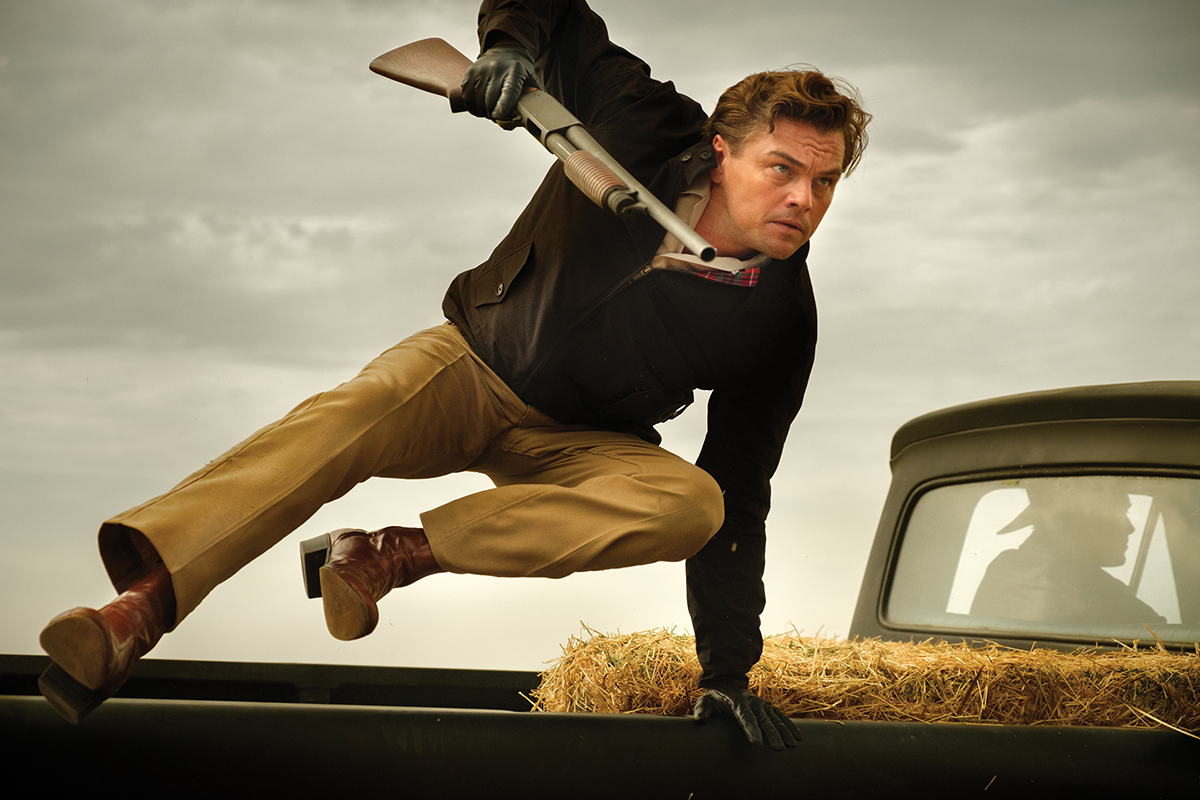 Once Upon a Time in Hollywood: Leonardo DiCaprio

In Billy Wilder’s Sunset Boulevard, still the ultimate movie about the dark side of Hollywood fame, a struggling screenwriter tells the once-great silent film star Norma Desmond, “You used to be big.” Her response, one of the best of many great lines in the movie, encapsulated every aspect of Desmond’s disdain for all that was new in Hollywood since talkies and TV: “I am big. It’s the pictures that got small.”

Quentin Tarantino, the ultimate movie fan of moviemakers, has made his Sunset Boulevard, and it’s called Once Upon a Time in Hollywood (★★★★). More sweet than bitter — though assuredly bitter and brutal in its violence — the film might encapsulate every aspect of Tarantino’s disdain for a certain new culture in Hollywood. The movie proves, yet again, that the director of Pulp Fiction and Inglourious Basterds knows how to make a picture big, without the aid of comic book superheroes or CGI behemoths.

The film’s primary special effects are its gorgeous widescreen presentation, and the one-two punch of a pair of Hollywood’s biggest movie stars, Brad Pitt and Leonardo DiCaprio, doing their Butch and Sundance best against the backdrop of one of the most notorious events of the 20th century.

Butch Cassidy and the Sundance Kid, another pairing of golden movie idols, was the top-grossing film of 1969, a fact certainly not lost on Tarantino. Set in that tumultuous year, Once Upon a Time in Hollywood is nothing if not an exhaustive, immersive dip into the sun-kissed pool of movie people in the waning days of a golden age. Golden to some, not everyone — although the movie barely mentions Vietnam or civil rights struggles or the race war Charlie Manson hoped to incite through murder.

But Manson and his family do lurk around the margins of Tarantino’s 1969, until the infamous cult’s horrifying real-life trajectory intersects with the film’s foreground fiction about fading star Rick Dalton (DiCaprio) and his fiercely loyal stunt double, driver, handyman, and all-around road dog, Cliff Booth (Pitt). Dalton, formerly the TV cowboy star of his own long-running show, Bounty Law, sees the town and tastes changing. Soured by cynicism and booze, he’s openly insecure about his career and his claim to Hollywood real estate, in the form of both his hillside mansion and his slice of fame. 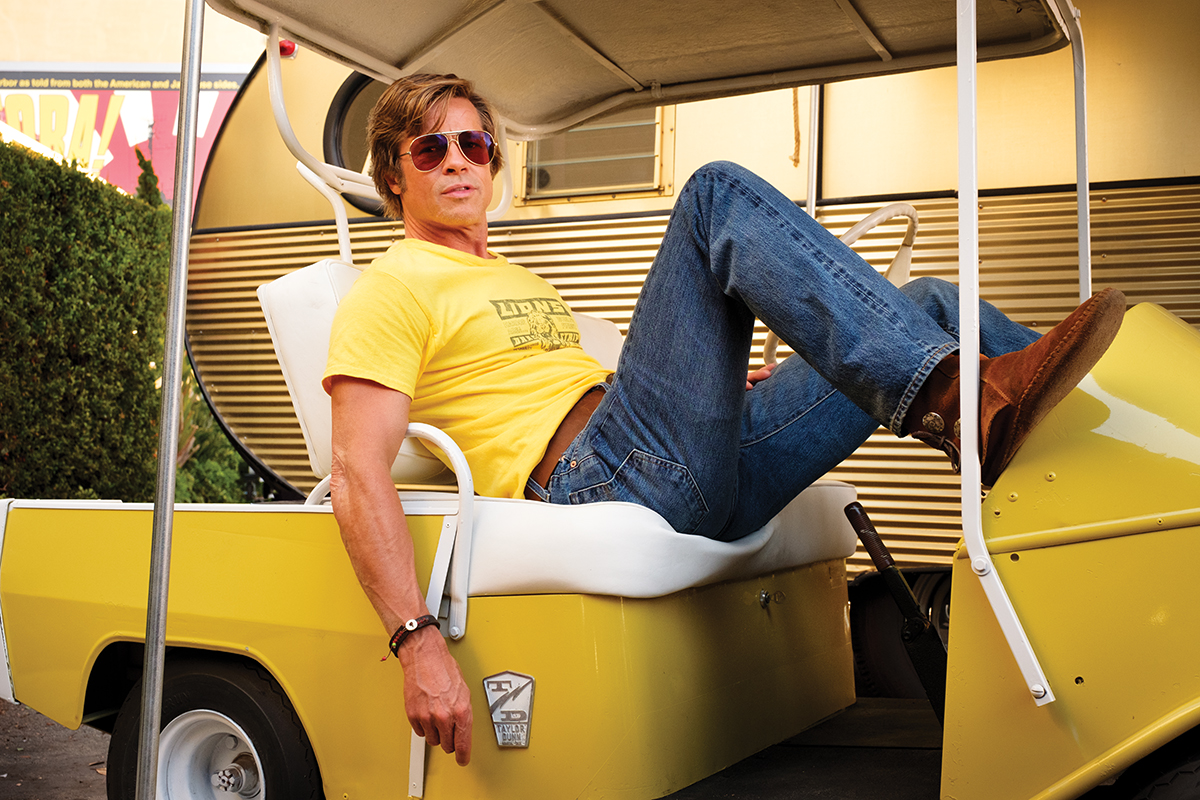 Once Upon a Time in Hollywood: Brad Pitt

Dalton doesn’t want to be a “used to be” any more than Norma Desmond did, so he puts real effort into rehearsing for a new gig, playing the heavy on the pilot for a TV western. Tarantino and DiCaprio make sharp, bleak comedy of 44-year old Leo playing an actor’s bone-chilling fear of becoming a has-been. The story is more about Dalton’s genre being put out to pasture, but, effectively, the film deals with the idea of an entire generation of manly men — of gun-slinging, bronco-breaking, John Wayne-dreaming men — being led out of Hollywood.

But before they go, Tarantino delivers a farewell bro-hug, or perhaps indignant celebration of the good old days of the white All-American Male, by giving them and us their shining example in tough hombre Cliff Booth. The movie revels in his rugged charm. He might be beta to Dalton’s alpha, but Booth isn’t taking any shit off of anybody else, not even Bruce Lee (Mike Moh), whom he challenges to a fight on the set of The Green Hornet. Booth is The Man when fists are flying, but he’s also still just a guy who chauffeurs Dalton around in the star’s Cadillac, and does the actor’s bidding before heading home at night to his old Airstream trailer parked behind the Van Nuys drive-in.

Pitt gets to show off his Cali-hunk good looks, as well as his acting chops, capturing the paradox of Booth, a dude who always acts like he’s in charge, even though he’s almost never in charge. Booth lives in the outmoded days of men who called every woman “honey” or “sweetie” or “pumpkin puss,” and he’s not going quietly into that good night to be replaced by the sensitive New Man, or by a woman. But, as we watch him get fired off a stunt double gig by a female producer, it’s undeniable that even in Tarantino’s 1969, women are rising in Hollywood.

In Tarantino’s problematic 2019, though, women are mere accessories in this film about manhood. Margot Robbie, in particular, is underserved in her role as doomed actress Sharon Tate, who, along with her husband, filmmaker Roman Polanski (Rafal Zawierucha), happens to be renting the house next door to Dalton’s. Weaving Tate and Manson into his tale about Dalton and Booth — and about the present-day last gasps of the Old Boy network that undoubtedly benefited him — Tarantino offers a fascinating, radio and pop culture-soaked paean to the Sixties, and a fairy tale vision of a changing of the guard. Like most fairy tales, it’s also soaked in blood and death, but offers some glimpse of a happily ever after.

Once Upon a Time in Hollywood is rated R, and is playing at theaters nationwide. Select theaters, including the AFI Silver in Silver Spring, Md., are showing it on film in either 35mm or 70mm. Check your local listings or visit www.fandango.com.

André Hereford covers arts and entertainment for Metro Weekly. He can be reached at ahereford@metroweekly.com. Follow him on Twitter at @here4andre.
← Previous Story Film Review: ‘Three Peaks’
Next Story → Film Review: ‘Paris Is Burning’