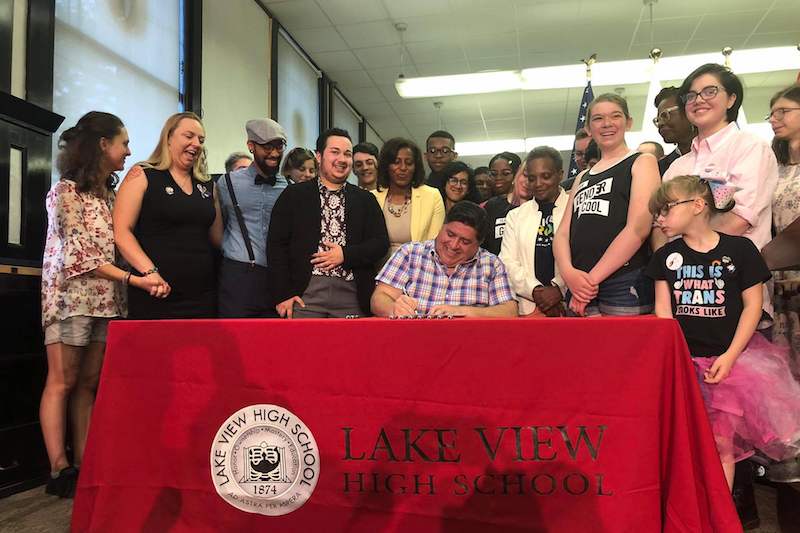 The “Affirming and Inclusive Schools Task Force” — comprised of students, parents, teachers, medical professionals with experience in transgender health care, and LGBTQ community activists — will submit their recommendations to the Illinois Board of Education to be published online.

The recommendations — due by Jan. 1, 2020 — will not be binding, meaning schools will not be required to implement them, but will serve as a resource for “best practices” that schools may adopt if they so choose, reports the Chicago Sun-Times.

“This executive order is one more step toward securing Illinois’ place as a leader in equality and hope,” Pritzker said before signing the order. “Under this executive order, ignorance is no longer an excuse for bigotry.”

According to GLSEN’s 2017 National School Climate Survey, 34.8% of LGBTQ students nationally said they missed at least one day of school in the past month due to feeling unsafe.

Twenty-two percent and 20% percent of LGBTQ students said they were physically harassed based on gender expression and gender, respectively.

“The vast majority [of trans students] report they experience discrimination in their schools or classrooms. Left without adequate protections, they avoid school functions, their extracurriculars, their bathrooms, locker rooms, sometimes even skipping out on the entire school day itself,” Pritzker said in his remarks at Lake View High School. “They feel unsafe in the very institutions that are meant to foster their curiosities, their passions, their beliefs. That’s not who we are in Illinois. It’s unacceptable and it ends now.”

He later took to Twitter to tout the newly signed order, tweeting:  “I just signed an executive order to disrupt the patterns of discrimination in our classrooms and ensure our school across the state are affirming and inclusive for transgender, nonbinary and gender nonconforming students.”

I just signed an executive order to disrupt the patterns of discrimination in our classrooms and ensure our school across the state are affirming and inclusive for transgender, nonbinary and gender nonconforming students. pic.twitter.com/NucR3pH4AA

Chicago Mayor Lori Lightfoot, an out lesbian, who was present at the signing ceremony, praised the governor’s order.

“This executive order is about more than protecting the young members of our transgender community, it’s an important first step towards ensuring every Illinois student has the safe space that allows them to reach their full potential,” Lightfoot said in a statement. “Ending the intolerable levels of discrimination and violence against our transgender community starts here — in our schools — by making the values of tolerance and respect just as much a part of our educational culture as academics, athletics, and the arts.”