Both flag burnings are being investigated as potential hate crimes, police say 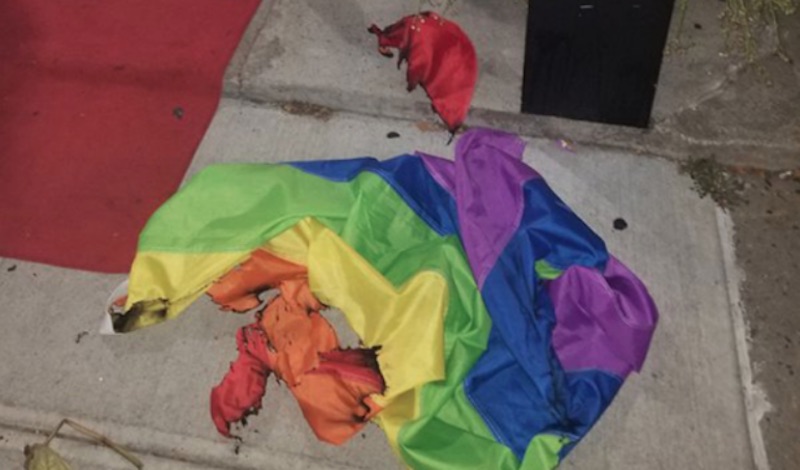 For the second time in just over a month, a rainbow flag flying outside of a New York City gay bar has been set alight.

Alexi Minko, the owner of the Alibi Lounge, the city’s only black-owned gay bar, said that in the early morning hours of Monday, July 8, someone on the street came in to inform the bar staff that the flag had been burned. Minko places the time of the burning between 12:20 a.m. and 12:45 a.m.

New York City police had already been investigating an almost identical incident from May 31, when the current flag’s predecessor was set on fire the day before New York’s first Pride Month celebrations were to kick off.

“I have to say that what I find odd was the timing of both events,” Minko told the Associated Press. “One was at the beginning of Pride and one was right at the end. One has to wonder if there’s a kind of message they’re trying to send.”

Minko noted that a staff member had to remove rainbow flags from the bar’s entrance on July 4 because some people “were intentionally setting off firecrackers” at the front door.

But he added that hasn’t received any threats since the first flag-burning — even two weeks ago, during the height of New York City Pride festivities, which this year coincided with the celebration of World Pride.

A New York City police spokesman told the AP that the flag burnings are being investigated as a possible hate crime.

No suspects have been identified yet, and staff said they didn’t catch a glimpse of any suspects, but the building’s landlord has cameras trained on the front door, which may have captured the vandal’s picture on film.

Minko added that he didn’t expect a repeat of what occurred during on May 31, particularly after police released surveillance video of a potential suspect.

Officers regularly surveilled the club, keeping an eye out for threats, and even dropped by while on patrol on Saturday night.

“Second time around, I’m really kind of in shock, I have to admit,” Minko said.