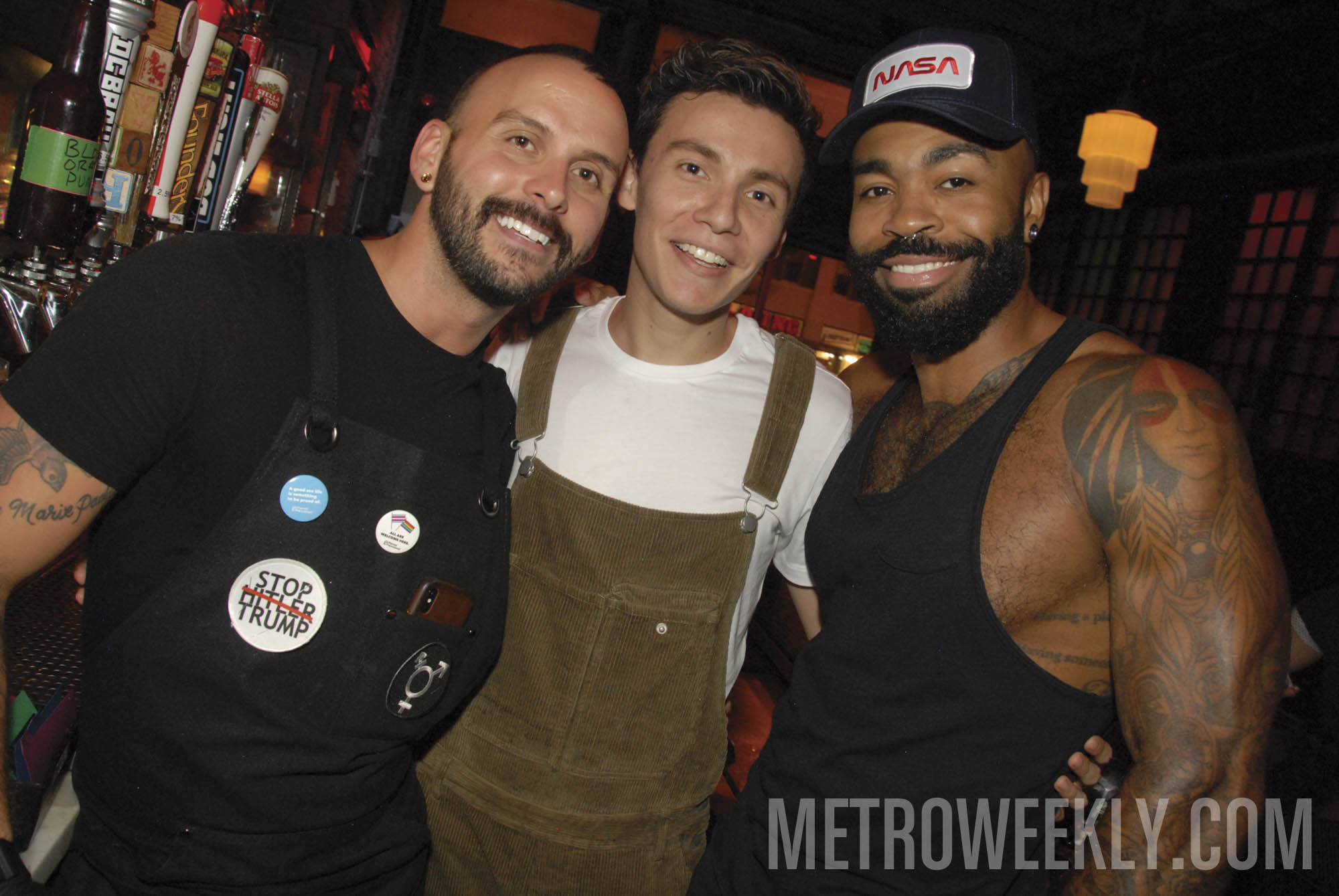 Nearly eight years ago, David Brown had the idea for a regular party named after a type of gay man that effectively bridged the gap between two gay archetypes: skinny, smooth twinks on one hand, husky and hairy bears on the other. In 2017, Brown retired the popular monthly party he called Otter Crossing after six years and two venues. But those namesake nimble and furry critters somehow managed to weasel their way back into Brown’s party promoting career — and in a much bigger way — with the launch of the weekly Otter Happy Hour, presented by Brown and Otter Den every Friday from 5 to 11 p.m. at Trade. As before, everyone is welcome, whether hirsute or hairless, and no matter identity, size, expression, label, or spirit animal. The party this Friday, July 26, features groovy tunes spun by DJ Khelan Bhatia starting at 7 p.m., with XL-sized, regularly-priced drinks, as well as beer and wine for only $5 each, until 10 p.m. The party, hosted by otter pinup Derek Mulhern, will also extend onto the back patio. Trade is at 1410 14th St. NW. Call 202-986-1094 or visit www.tradebardc.com.

Referred to as an “LGBTQ R&B Social,” this party, presented by Lush Vibes Entertainment and LezLink Social Club, promises “a night of sexy games” — “Dirty Scrabble, Cuff Cards, Red Flags,” plus Uno and Connect Four — and “new friends” bonding over R&B. It all goes down this Friday, July 26, starting at 10 p.m., on the second floor of Shaw’s hip Italian restaurant Al Crostino, which was rebranded XX+ Crostino a year ago and designated a safe space for “queer womxn,” yet one that’s open to all, “advocating inclusivity, diversity, and community.” XX+ Crostino is at 1926 9th St. NW. Cover is $10. Call 202-797-0523 or visit www.facebook.com/lushvibesent.

It’s not the only recurring underwear party at the Green Lantern, but the monthly Jox event has been a popular stripdown staple for years at the bar, tucked away in a Scott Circle alley. Certainly few others can claim to have enticed as many men to strip to their skivvies as David Merrill, the veteran local promoter who helps throw Jox along with DJ UltraPup. On Saturday, July 27, starting at 9 p.m., UltraPup will be assisted by DJ Popperz in pumping up the sexy musical vibe while Lumious and Centaurian will be dancing on the boxes. Saturday, July 27, starting at 9 p.m. Upstairs at the Green Lantern, 1335 Green Court NW. Cover is $5, including free clothes check. Call 202-347-4533 or visit www.greenlanterndc.com.

Alexander Paul “Sasha” Coe and John Digweed are each legendary DJ/producers in their own right. But together, they comprise one of house music’s first and most famous DJ/production duos. In the decades since their joint residency at New York’s storied, gay-popular nightclub Twilo, the U.K.-native duo hasn’t been seen or heard terribly often on this side of the pond. This Saturday, July 27, starting at 9 p.m., Club Glow presents the duo’s return to the decks at Echostage for an “intimate #AllNightLong set.” While there’s nothing specifically gay about them, the two did get their start in the gay-friendly rave scene of the early 1990s. Over the decades they’ve also DJ’ed at a few gay or gay-popular clubs and events, from Twilo to Montreal’s Black & Blue Festival. And with their central progressive house sound — generally warm, melodic, and emotional — it would be a surprise if their shows didn’t draw a healthy sprinkling of LGBTQ fans. Echostage is at 2135 Queens Chapel Rd. NE. Tickets are $30 plus a fee of nearly $8. Call 202-503-2330 or visit www.echostage.com.

The rooftop of Dupont Circle’s boutique Embassy Row Hotel will be hopping this Sunday, July 28, from 6 to 9 p.m., during a free, special happy hour event hosted by Go Gay DC, described as “D.C.’s LGBTQ+ community hub focused on friendship, leadership, and service.” Intended as a chance to socialize and network with fellow members of the LGBTQ community and allies, the event also allows you to see the spectacular sunset from the property’s 9th-floor rooftop. You can also bring swimwear for a dip in the pool at this casual-themed soiree. And drink specials at the rooftop bar include $9 Froses as well as Tito’s cocktails, $5 for Pride Bud Lite bottles, and $6 for drafts of Stella. The Embassy Row Hotel is at 2015 Massachusetts Ave. NW. Free, but registration required due to limited space. Call 202-265-1600 or visit www.facebook.com/GoGayDC.