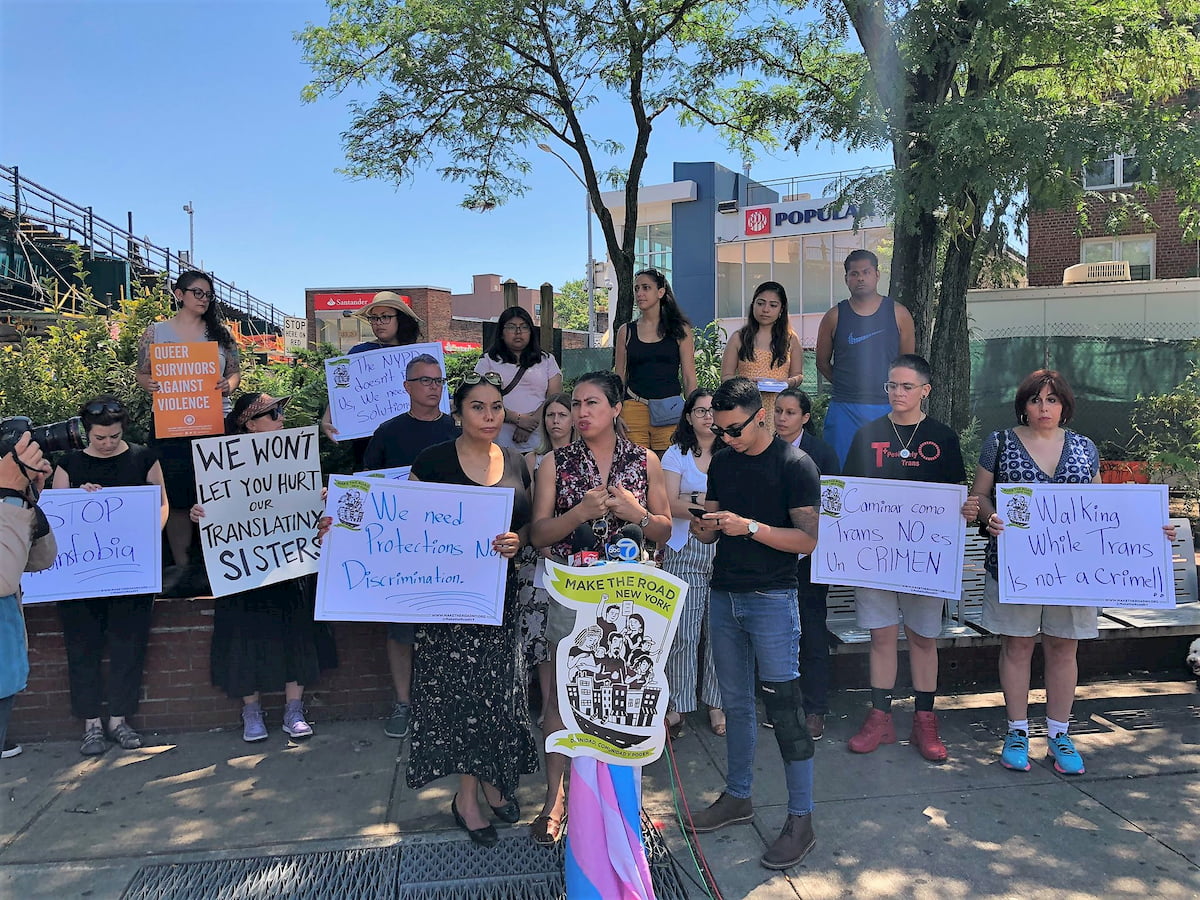 A rally in support of Bianey Garcia and Norma Ureiro — Photo: Make The Road New York

Two transgender filmmakers were reportedly attacked in the New York City borough of Queens while filming a documentary about anti-transgender violence.

Norma Ureiro, 43, and Bianey Garcia, 29, were recording footage in Jackson Heights when they were accosted by a couple who hurled slurs at them and then pepper sprayed the women, the New York Daily News reports.

The incident took place early in the morning on Saturday, June 29.

Ureiro and Garcia said they were walking to meet two other members of their film crew when a man and a woman confronted them, shouting anti-trans slurs.

As the filmmakers approached their film crew, the woman, Paolo Custodio, sprayed them with a substance.

Police have yet to determine what the spray was, but the women say it was pepper spray.

“My sister Norma Ureiro and I we just got pepper sprayed at 82nd St & Roosevelt Av by a transphobic woman,” Garcia tweeted. “She offended us by calling us fucking [faggots], fucking whores [etc.]”

My sister Norma Ureiro and I we just got pepper sprayed at 82nd St & Roosevelt Av by a transphobic woman. She offended us by calling us fucking fagots, fucking whores ect.
(Enough is enough) 😡😡😡😡 pic.twitter.com/50mmpqtd6Y

“This time it was only pepper spray but next time it could be a knife or a gun,” Ureiro said at a press conference on Monday, July 1.

According to court papers, Garcia said the woman sprayed her back and shoulder, while Ureiro said the spray covered her chest and caused a burning sensation and redness.

Custodio was arrested shortly after the attack. Police charged the 24-year-old with felony assault as a hate crime and aggravated harassment.

She was released without bail and has been ordered to stay away from Ureiro.

Custodio’s accomplice, who has not been named, allegedly returned to the women after Custodio was arrested and pepper sprayed Garcia in the face.

Garcia was hospitalized, and said the second attack was much more severe.

A video from the hospital after a transphobic man pepper sprayed me in my face. #Stonewall50 #WorldPride2019

Ureiro claimed that when she reported the attack to police, she was threatened and ignored, Patch reports.

“I’m upset because of what happened. As members of the trans community, we are not safe,” she said in a statement. “When I told the police they threatened us, the police ignored us. We are in danger in the streets — it doesn’t matter what you’re wearing, you’re in danger just for being trans.”

An NYPD spokesperson said in a statement that the department “takes hate crime very seriously, and there is no place for hate or intolerance in New York City, or anywhere. The NYPD finds this crime especially egregious as it occurred on the eve of the World Pride Celebration.”

The NYCLU, New York state’s ACLU affiliate, said transphobic violence “has to stop” in a tweet.

“The city that gave birth to Stonewall 50 years ago and celebrated Pride with millions just this past weekend, is also the same city where trans women face discrimination and violence every day,” they tweeted. “This has to stop.”

The New York Legal Assistance Group condemned the attack, saying it was a reminder on Pride weekend of the ongoing fight for equality.

“We condemn this transphobic attack against @MaketheRoadNY organizers Bianey Garcia and Norma Ureiro on Pride Weekend,” NYLAG tweeted. “This is a reminder that for many in the #LGBTQ community, they are still fighting for equality.”

Make The Road New York, an immigrant and working class advocacy organization which both Garcia and Ureiro are affiliated with, said that walking while trans is “not a crime.”

“This weekend while most celebrated #Stonewall50, Bianey and Norma were attacked for being Trans,” Make The Road NY tweeted. “This violence must stop! We need to protect our Trans, GNC and non binary community! #WalkingWhileTrans is not a crime.”

Also Read: Congressional bill would ban conversion therapy by declaring it a form of fraud