Defense bill will now head to Conference Committee, but Speier Amendment could be removed from final version 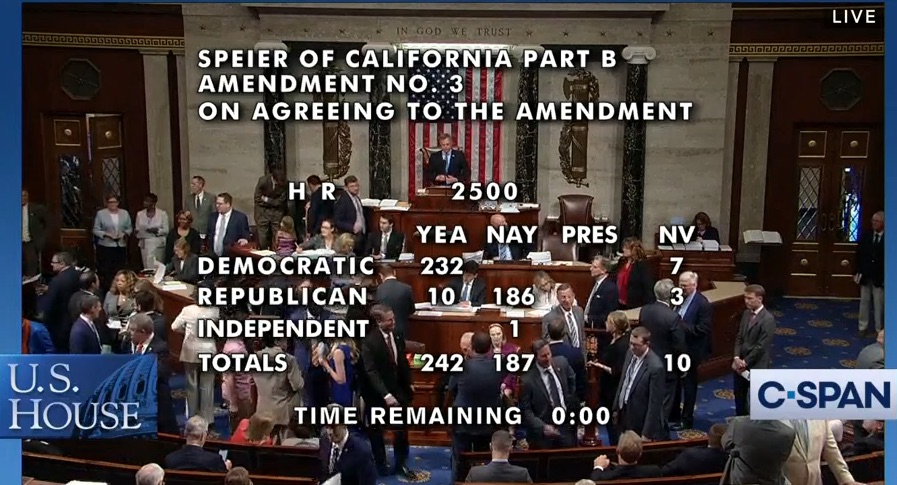 On Thursday, the U.S. House of Representatives approved an amendment to the National Defense Authorization Act that would allow transgender individuals who meet all other physical, educational, and mental health standards to serve in the U.S. military.

The amendment passed 242-187, with 10 Republicans voting with Democrats in support of transgender military service.

It incorporated much of the language from Truman’s order — including that “there shall be equality of treatment and opportunity for all persons in the armed services” without regard to personal characteristics — while adding sex, gender identity, and sexual orientation to the list of protected classes.

The vote in favor of the amendment is an act of direct defiance against the Trump administration, which has fought for the past two years to limit transgender participation in the military.

Under the so-called “Mattis Plan,” named after former Defense Secretary Jim Mattis, transgender individuals may only enlist or serve in the U.S. military if they have not been diagnosed with gender dysphoria and remain in (and present according to grooming standards for) their assigned sex at birth.

Prior to the vote, the Modern Military Association of America, an advocacy group for LGBTQ service members, released a letter sent to members of Congress urging them to support the Speier Amendment.

An estimated 15,000 transgender troops were active duty members of the Armed Forces when the Mattis Plan went into effect in April.

The Pentagon has not published any information regarding the number of service members who have been discharged or denied commissions as a result of the new policy.

Last month, the Senate passed its own version of the NDAA without any provisions challenging the administration’s current policy on transgender service.

After the House passes its version, the bill will go to a Conference Committee to reconcile the differences between the versions of the bill. It is at this point that the amendment could remain intact or could be removed from the bill.

Even though hopes for the Speier Amendment’s successful adoption by the Conference Committee seem dim, LGBTQ advocates praised its passage by the House.

“This is a crucial moment for our elected officials to bring accountability to a reckless and lawless policy,” Mara Keisling, the executive director of the National Center for Transgender Equality, said in a statement. “This bigoted ban has brought chaos to prospective recruits, active duty service members, and countless families forced to watch their dedication and duty soiled by a self-interested President.

“The military wants and needs qualified transgender people, and we applaud this action by the House to ensure that every person willing and able to serve is allowed to serve,” she added. “It will now be up to the Conference Committee and the President whether to embrace equal opportunity or discrimination.”

“We applaud the leadership shown by bipartisan members of Congress in their efforts to reverse this policy which turns away qualified, dedicated Americans who want to serve their country,” said Jennifer Levi, the director of the Transgender Rights Project at GLBTQ Legal Advocates & Defenders, which is suing the administration in court over the “Mattis Plan,’ which advocates argue essentially constitutes a ban.

“Diversity is an asset to our institutions and that includes the U.S. military. We’ve seen this hold true time and again — through desegregation, the integration of women, and the end of ‘Don’t Ask, Don’t Tell,'” added Shannon Minter, legal director for the National Center for Lesbian Rights, which is also suing the administration on behalf of transgender service members and recruits. “Allowing transgender people to serve on equal terms in our nation’s military will only make our military and our nation stronger.”