Blessed with a thrilling cast, Olney's fresh, powerhouse staging of "Cabaret" feels more relevant than ever

Credit to a company that can pick up a show as familiar as Kander and Ebb’s Cabaret and produce a take as purposeful as director Alan Paul’s fresh staging at Olney Theatre. Stepping out with the most exciting choreography to bump and grind through D.C.’s hot theatrical summer, this Cabaret (★★★★) is its own special creation.

Well in tune with Joe Masteroff’s book for the show and Chris Youstra’s astute musical direction of an all-time great score, Paul locates potent, present-day context within the ’20s-set musical’s depiction of the looming, bitter reign of fascism. The rise of the anti-semitic National Socialist German Workers’ Party creeps along, perceptible just enough behind the parallel love stories of Sally Bowles and Clifford Bradshaw, and the widowed Fräulein Schneider and Herr Schultz, until Nazis come cruelly crashing in to threaten everything that love has built under the roof of Frau Schneider’s cozy boarding house.

Still, it’s not all love and kisses between Kit Kat Klub star Sally and reserved but increasingly worldly Cliff, the young bisexual, American writer eager to soak up the celebration that is Sally’s Weimar Berlin. As portrayed by a gutsy Alexandra Silber, this Sally is a crafty English tart, who promises much and guarantees nothing but a good time for as long as the gin and fantasy are flowing. Silber infuses Sally’s songs and dances with soul and humor, delivering an especially knowing and funny “Don’t Tell Mama,” and a passionate take on the title tune.

As her darling Cliff, Gregory Maheu embodies the decency and beauty Sally might fall for, along with the awareness to sum up the proper response to Nazis brutally taking over the city: “If you’re not against this, you’re for it.” Masteroff’s 50-year old dialogue sounds on the nose for some unmistakable reason, and the cast hits those beats deftly to ground the message in an uneasy tension, while Youstra’s orchestra accentuates the sardonic humor, and occasional horror, in all the right places.

One of the brightest spots onstage is wherever Donna Migliaccio appears in her gorgeously sung, heartwarming turn as the cautiously hopeful romantic Fräulein Schneider. As with Maheu’s Cliff, Migliaccio’s portrayal plays a strong hand in providing moral perspective on the choices good people are forced to make during divided times. “With the storm in the wind, what would you do?” Schneider sings.

Tom Story’s compelling Ernst, Cliff’s first German friend, further complicates the question of being resigned, or being part of the resistance. Less compelling, Mitchell Hébert appears not entirely committed to his interpretation of Herr Schultz, especially in the singing, which tends to diminish not only Schultz’s songs but also his romantic chemistry with Schneider.

Practically combusting with chemistry, with fellow cast and the audience, Mason Alexander Park is an endless delight as the Kit Kat Klub’s provocative, gender-fluid Emcee. A recent stint standing by for Darren Criss on the Broadway touring production of Hedwig and the Angry Inch might have been the perfect preparation for Park’s precisely accented yet delightfully loose tour guide into the tawdry and terrible. Leading the likewise gender-fluid Kit Kat Girls and Boys, a winning ensemble, Park’s Emcee attacks Katie Spelman’s wonderful choreography with the gamine athleticism of a Johnny Weir, and a very similar fashion sense.

Kendra Rai’s costumes generally are fun to look at, but they don’t always do the Emcee, Sally, and the Kit Kat crew the justice of complementing their performances, rather than distracting from them. Sally looks like she raided the Hustler Store for the red leather corset and thigh-high boots she dons for “Mein Herr.” The outré dominatrix-meets-military styling for the Kit Kat performers makes sense, but also suggests foreign, unrelated tangents to the story being told.

The faux fur-and-leather costumes do, however, suit Wilson Chin’s glam, mirror-lined set for the Kit Kat Klub, lit with drama and dimension by Colin K. Bills. The stageside tables seem well worth the ticket at this club, where, inside, the girls and boys are beautiful and life is a decadent and dangerous cabaret. The party promises much and guarantees nothing but a good time for as long as the gin and fantasy flow freely, for those in power. 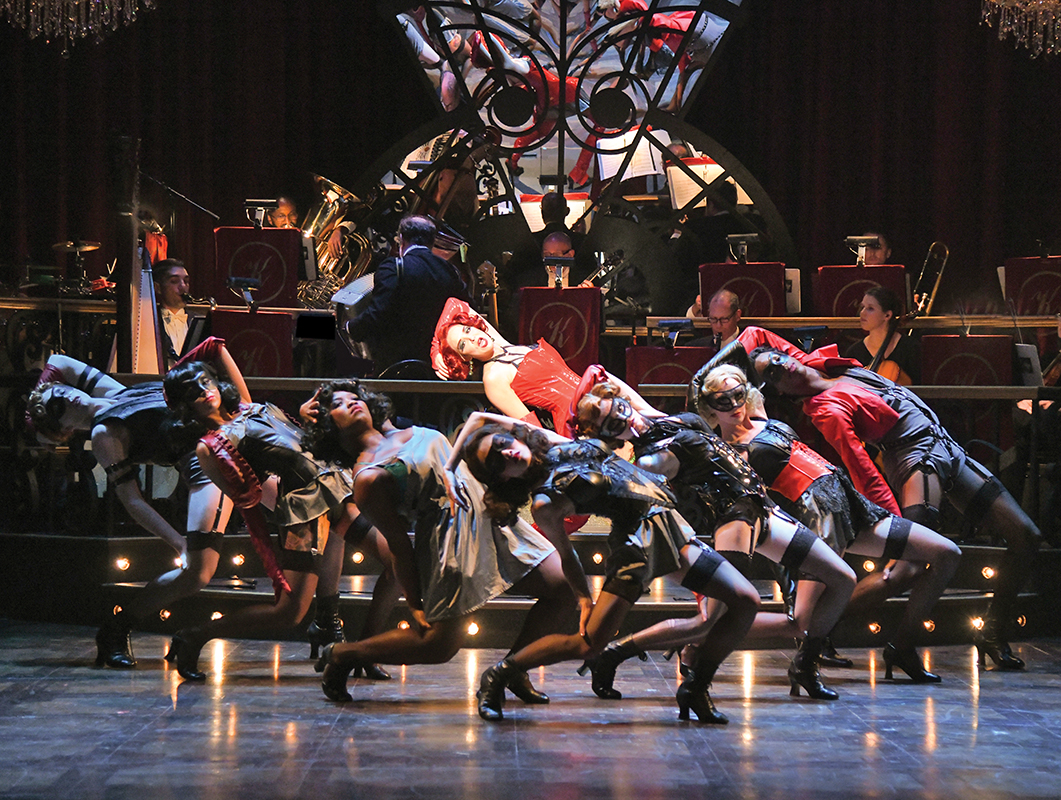 André Hereford covers arts and entertainment for Metro Weekly. He can be reached at ahereford@metroweekly.com. Follow him on Twitter at @here4andre.
← Previous Story DC Theater Review: Assassins at Signature Theatre
Next Story → Spotlight: DCDD’s Tupperware Party with Dixie Longate