By John Riley on September 10, 2019 @JohnAndresRiley 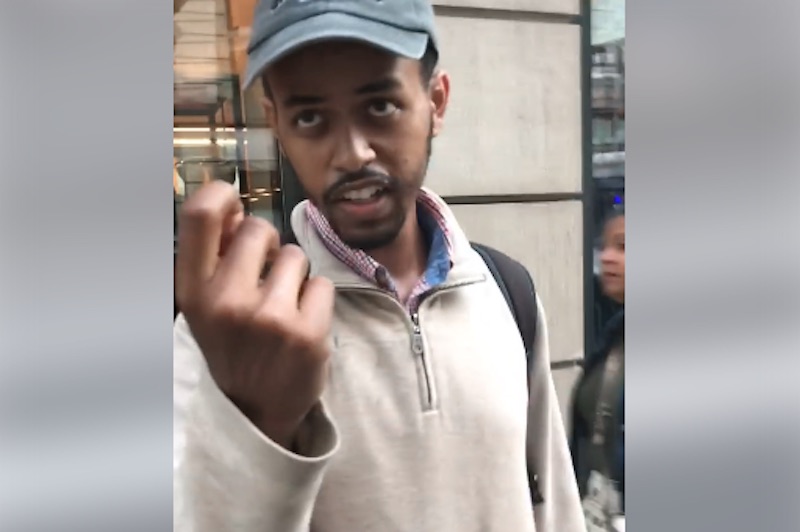 The man who confronted Adam Eli demanding he take off his kippah – Photo: Adam Eli, via Facebook.

A gay Jewish New Yorker posted a video to social media of a man demanding that he take off his pink yarmulke, also known as a kippah, and claiming that he was desecrating the name of God by wearing it.

Adam Eli, a queer activist, was leaving the subway station at 28th Street and Broadway in Manhattan when he claims that a man he didn’t know confronted him and demanded that he “take that kippah off.”

Eli began filming, and the man, seen wearing a baseball cap and a light-colored fleece jacket in the video, persisted, telling him to remove the religious skullcap from his head. Eli asks the man: “Why? Because I’m gay and wearing a kippah…is that why?”

The man responds: “It’s a Chillul Hashem,” a Hebrew term for when a Jewish person desecrates the name of God by acting immorally, reports the New York Post.

“Any man that lays with another man is an abomination,” the man says, quoting the Torah. “You’ll be murdered for it. Take the kippah off.”

Eli, who was also carrying a glittery pink purse and had an LGBTQ Pride patch sewn onto his jeans, refused to, saying: “This is my life and my city. I don’t have to take my kippah off.”

The man then follows Eli, who is still filming him, telling him: “Stay in the closet! Make sure your closet is in another closet!”

Eli later told PIX11 that the man followed him for a couple of blocks, forcing Eli to enter a store in order to avoid the man. He later posted the video to his Facebook page and to Twitter, in part, to point out the harassment that LGBTQ people can face, even as he acknowledges he’s enjoyed a good deal of privilege in his own life.

“I spent the first 18 years of my life listening to people tell me I couldn’t be gay and Jewish,” he wrote on Facebook. “Today I love my queer jewish identity and nobody is taking that away from me.

“This type of harassment is a fraction of what our trans and gender non-conforming family get every single day. In this moment I was able to stand up to my attacker NOT because I am brave but because I am a white, well-resourced man who got harassed in a well-lit, heavily trafficked place,” he adds. “What happens when a white man attacks a black trans women late at night? What if the cops are called? We all know who’s (sic) side they will be on.”

Eli also warned that cisgender white gays who can “pass” for heterosexual in public that they, too, need to be aware of the troubles facing their fellow human beings.

“Racism, transphobia, xenophobia, islamophobia, anti semitism and ableism hold hands. As our ancestors taught us — none of us are safe until all of us are safe,” Eli wrote. “Queer culture does not mean going to Equinox and getting brunch. Queer culture is about fighting for your community and all marginalized people.”

Mayor and presidential candidate Bill de Blasio shared Eli’s video on his mayoral Twitter account, tweeting that it took “courage to confront homophobia and tell a story like this.”

‘I’m sorry you had to go through this, Adam,” de Blasio wrote. “But we’re proud of how you responded. There’s no place for hate in this city.”

It takes courage to confront homophobia and tell a story like this.

I’m sorry you had to go through this, Adam. But we’re proud of how you responded.

There’s no place for hate in this city. https://t.co/9SqgfRQhJd

John Riley is the local news reporter for Metro Weekly. He can be reached at jriley@metroweekly.com
← Previous Story Uber bans driver accused of kicking lesbian couple out of her car
Next Story → Original author of North Carolina’s “bathroom bill” seeks seat in Congress in special election