Sean Cormie says he was pinned down and attacked, while church pastors say it was a family conflict that got out of hand.

By John Riley on September 20, 2019 @JohnAndresRiley 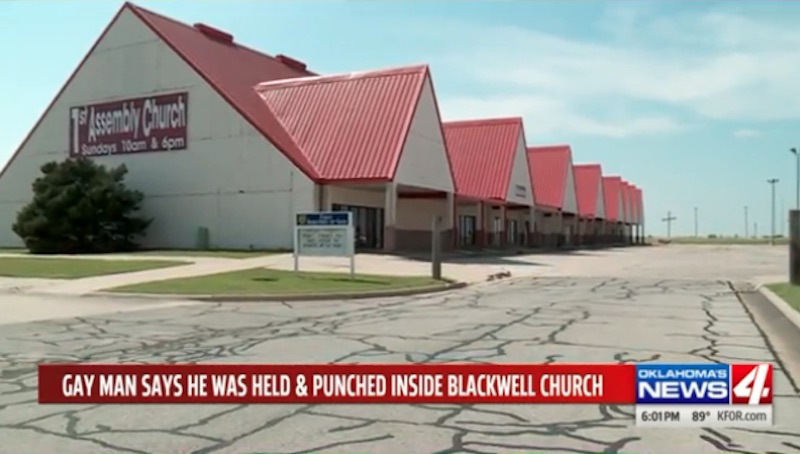 A gay man is accusing members of an Oklahoma church of holding him down and punching him while they tried to pray away his homosexuality.

Sean Cormie, 23, says he was asked by his family to attend services at the First Assembly of God Church in Blackwell, Okla., on Sept. 8 with his partner, Gary Gardner.

“I wanted to go to church to make my mom proud and make her happy,” Cormie told Oklahoma’s News Channel 4 KFOR.

Everything was going smoothly until the end of the service when all of a sudden, the pastor began making statements condemning homosexuality, calling it an “abomination” and a “sin.” Then, 12 to 15 congregants surrounded Cormie and Gardner, praying loudly.

Cormie and Gardner tried to leave, at which point Gardner was pushed out of the building while the congregants seized Cormie, who claims he was held down and even punched in the face at one point.

“They hold me down, pin me down, and I’m crying, and the Holy Spirit just comes through me, and they keep speaking in tongues, praying over me,” Cormie said. “I was just crying ‘mercy, mercy.'”

When they eventually released him, he went to the Blackwell Police Department to file a report. The police chief confirmed to KFOR that the incident is being investigated but declined to give any additional details.

Cormier claims he’s since received threats telling him to drop the issue. He says he still has love for the church and its leaders but believes what they did was wrong.

Pastors Bill and Tami McKissick of First Assembly released a statement responding to the allegations against them and the members of their church.

“This began as a family matter that escalated. Our church would never condone restraint of any person unless they were engaged in violent activity,” the McKissicks said. “There is much more to this incident, and we are cooperating fully with law enforcement to hopefully bring all of the facts to light as a rush to judgment is not in anyone’s best interest.”

Cormie says he agrees that homosexuality is a sin, but he can’t change his sexual orientation.

John Riley is the local news reporter for Metro Weekly. He can be reached at jriley@metroweekly.com
← Previous Story Ben Carson allegedly calls trans women “big, hairy men” during HUD meeting
Next Story → Bernie Sanders: Where does he stand on LGBTQ rights?