The glorious sight of a giant, alien flytrap chomping down on unsuspecting human victims is just one of many joys to be had in Constellation Theatre Company’s Little Shop of Horrors (★★★★☆). The greedy, green potted menace known as Audrey II also sings, shouts, and seduces with the plush, soulful baritone of Marty Austin Lamar, while flapping its copious gums and snaky tendrils courtesy of puppeteer Rj Pavel’s spot-on manipulation.

Green thumb Seymour, the former orphan taken in and put to work by shop owner Mushnik (Robert John Biedermann), raises odd sapling Audrey II to full-blown man-eater, as the lady Audrey raises the courage to find her way out of an abusive relationship with gleefully sadistic boyfriend Orin (Scott Ward Abernethy). Montgomery and Danskey each deliver abundantly in the solo spotlight of numbers like Seymour’s desperate, puppet-assisted plea “Grow for Me,” or Audrey’s persuasive “Somewhere That’s Green,” but the spirit of Ashman’s script speaks to the importance of the group effort, of which this Little Shop, directed by Nick Martin, is a sterling example.

Seymour, Audrey, Mushnik and their Skid Row neighbors are all trapped living seemingly dead-end lives, but trapped together on these foul, vibrant streets. Togetherness is their key to pushing forward from misery, just as it’s integral to the rousing harmonies hit by the show’s inseparable, irrepressible girl-group Greek chorus Ronnette (Alana S. Thomas), Crystal (Chani Wereley), and Chiffon (Selena Clyne-Galindo). The tuneful trio are snarky, sassy, and delightfully costumed, whether dressed up or down in designer Frank Labovitz’s duds. And, while Thomas particularly pops with a well-timed comedic performance, again it’s the group effort of their powerful three-part harmony that best serves the dynamic score.

Music director Walter “Bobby” McCoy and the production’s live seven-piece band serve up that score brilliantly from the sha-la-la-la loveliness of the opening title tune, to the smooth, suspenseful strains of “Suppertime” — surely the hottest vamp ever written about feeding a man to a carnivorous houseplant. This is, as the song warns, a little shop of horrors, and Martin’s production brings the proper amount of campy, stylized murder and mayhem to its tongue-in-cheek amalgam of aw-shucks romance and kitschy, B-movie sci-fi. The story might also gain traction as a vehicle for subtle observations on class warfare, domestic violence, and the seediness of celebrity, but the director mostly steers around the musical’s heavier elements, sticking to a path of pure, escapist fun.

For the insatiable Audrey II, the fun’s only just begun when the show rounds the corner to a conclusion that feels logical yet too hasty to resolve our interest in these characters. Seymour, Audrey and the denizens of Skid Row end up overshadowed by the mean, green plant from outer space, both by design of the script and the direction, which doesn’t totally nail the tone of Little Shop‘s tough landing.

Yet, getting to that point is a nonstop good time, so what does it matter if the ends don’t all justify the plot’s ghastly means? This cast is a sheer pleasure to watch, and Ashman and Menken’s score sounds as finger-snappingly fresh as ever, while the crew at Constellation have done superb work rendering every campy, kooky, spooky detail of this inviting Little Shop. Sure, the potted plants hanging upside-down from the theater ceiling don’t necessarily make narrative sense, but even they help sink the house further into the fabulously rundown gutter of this beautiful, beloved Skid Row. 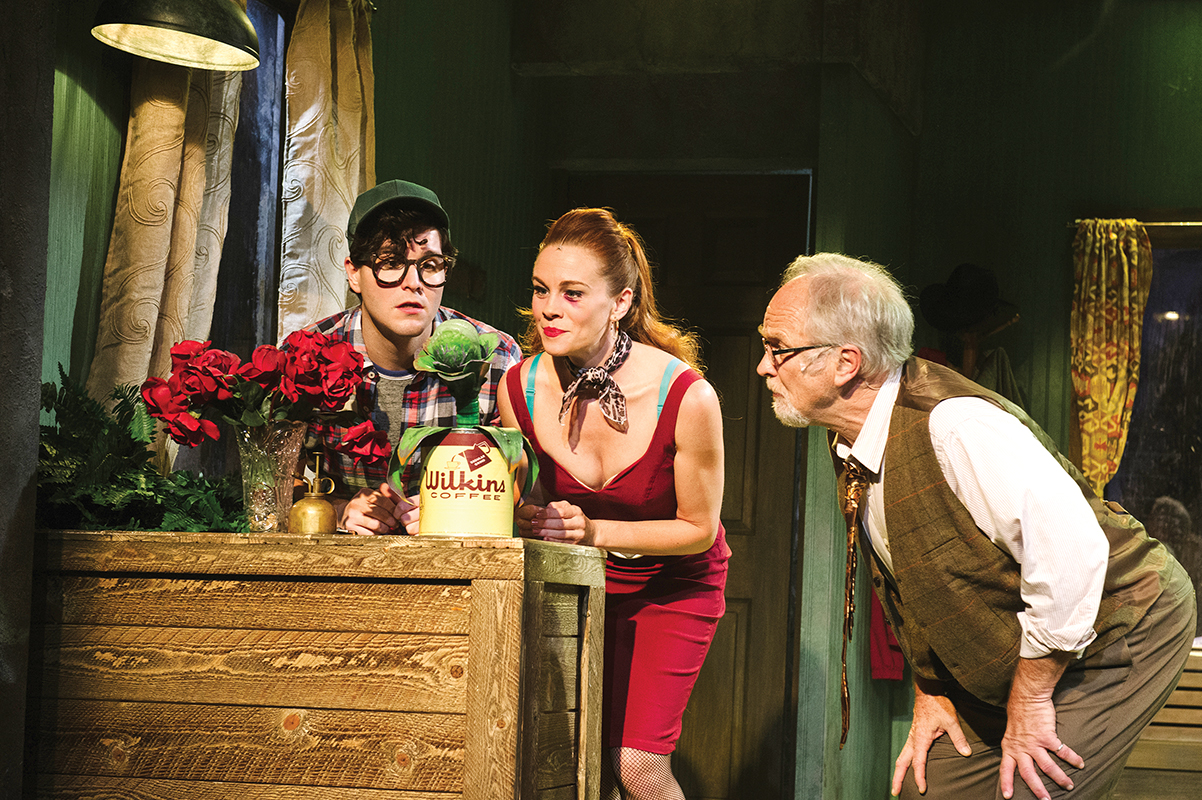