By John Riley on October 18, 2019 @JohnAndresRiley 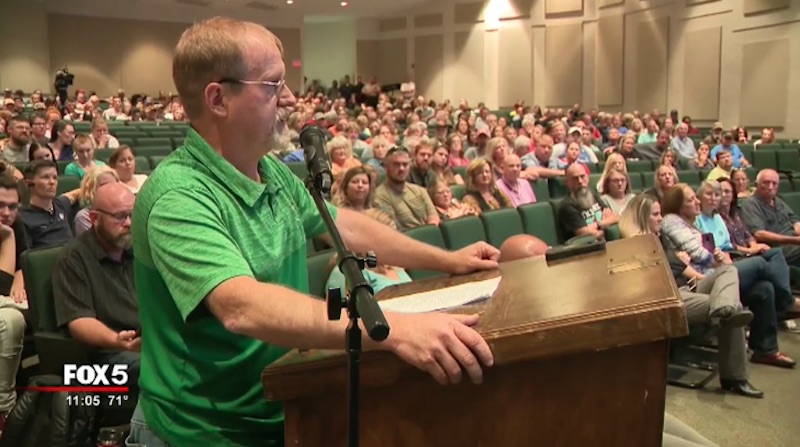 Hundreds of parents attended a meeting of the Pickens County School Board, with most opposing allowing transgender students to use bathrooms matching their gender identity – Photo: FOX 5 Atlanta

A Georgia school system will restrict transgender students to using a single-stall restroom after the superintendent received death threats and the girls’ restroom was vandalized.

Carlton Wilson, the superintendent of schools for Pickens County, which is located about 60 miles north of Atlanta, says he reversed course on a policy allowing transgender students to use facilities that match their gender identity, in large part because of threats from parents who opposed the change.

He says the controversy over the restroom policy also lead to an incident involving harassment, in which a juvenile was charged with disorderly conduct after making threats on social media. In addition, someone vandalized the girls’ bathroom with graffiti.

On Monday, hundreds of parents — most of them opposed to the pro-transgender restroom policy — packed a school board meeting to voice their opposition, with some heckling Wilson and members of the school board and threatening to defeat them in upcoming elections.

At that meeting, Wilson noted that, depending on the outcome of an appeals court decision regarding a lawsuit brought by a transgender Florida high school student over bathroom access, the district might be forced to adopt the pro-transgender policy anyway.

If the district refused, it could be sued and forced to expend significant sums of money to defend its biological-sex-based policy in court. But that argument was unconvincing to most parents in attendance at the meeting.

“The way some called [me] names has been embarrassing and disappointing to me, and that’s hard to get over,” Wilson told Atlanta ABC affiliate WSB-TV in an interview.

He claims that one person told him: “You know, situations like this brings (sic) out crazy people from both sides, and sometimes people die.”

Given the outcry and unrest over the restroom policy, Wilson said he called an emergency meeting of the school board, which voted to withdraw the policy, meaning transgender students have the option of using single-stall restrooms if they do not wish to use the facilities matching their assigned sex at birth.

Kino Stanfield, a transgender alumnus of Pickens County High School, says the problem with that policy, as it existed when he was a student, was that there were so few single-stall restrooms in the school that he was often late to class if he had to travel across campus to find and use them.

“Me, personally, I didn’t feel comfortable using the teacher’s bathroom because they were nice teachers, but they didn’t understand,” Stanfield says.