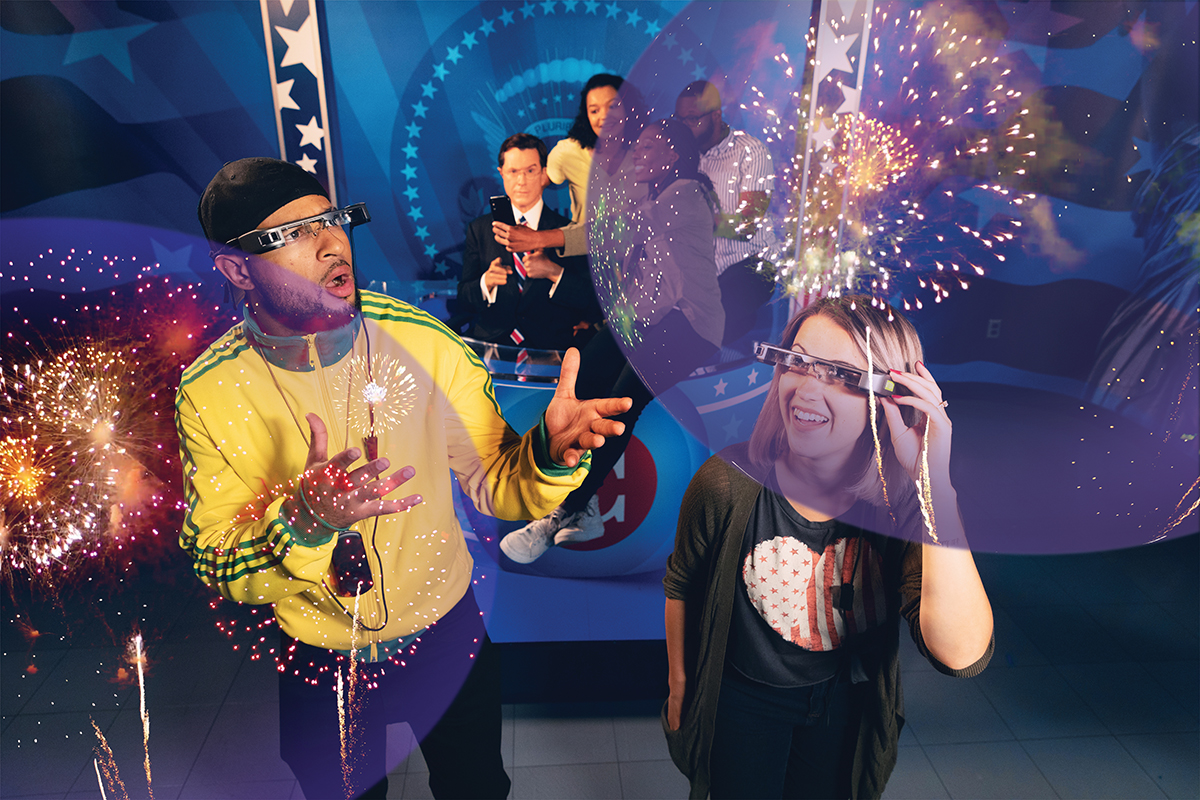 A quick swivel around reveals a smiling wax figure of RiRi, while the excited voice turns out to be Madame Marie Tussaud herself — or, rather, an actress decked out as the 18th-century wax sculptor. But, like Rihanna, Tussaud is not actually in the building. She’s a lively character dancing in space around museum visitors, visible through smart-glasses, audible via headphones, a playful virtual reality tour guide through Tussauds. Thanks to technology provided by Richmond-based ARtGlass, virtual 3-D incarnations of Tussaud and other historic figures inside the museum narrate broad summaries of their famous accomplishments and noteworthy events.

And they’ve brought visual aids. While the voice of Thomas Jefferson describes the Founders’ philosophies of liberty, his nickel-minted visage and an intricate hologram of his Monticello estate hover overhead. Wax-figure Lincoln invites visitors to his Ford’s Theatre box to hear tales of the Civil War, while 3-D images of battle float past. Stand next to the figure of MLK at his podium, and the glasses act as a teleprompter, scrolling the “I Have a Dream” speech for anyone eager to deliver their own March on Washington oration. Inside the recording studio-meets-nightclub where Rihanna, Miley, and Beyoncé await, a perky virtual choreographer is ready to teach adventurous museum-goers a hip-shaking dance combination to perform for their selfies and TikTok clips.

Along the fairly linear path through Tussauds, Alive in AR users can opt-in or out of such gaming-style interactive prompts by operating a one-button, battery-powered controller that hangs on a lanyard worn around the neck. Gearing up in the comfortable AR smart-glasses, wired earbuds, and controller will feel cumbersome to some, and, for others, like a giant technological leap forward in the Madame Tussauds experience.

Fresh tech or no, the wax figures themselves are as un-alive as ever, guests of honor in an eery, funhouse atmosphere augmented by their lifelike eyes and the fact that most are arranged in lifelike poses, just stiff and waxen. Still, Warren Harding looks ready to reach out and grab some ill-fated passerby. Hillary Clinton resembles a right-wing cartoon of Hillary Clinton who might come alive at any moment to launch a presidential campaign. It’s easy to bump into statues along the way, while searching the air for virtual 3-D clues and arrows towards the next exhibit.

But if having Harriet Tubman materialize to describe her travails along the Underground Railroad helps bring history and culture alive for Madame Tussauds patrons, then it might all have been worthwhile — especially since the Alive in AR Experience is included with the price of admission.

André Hereford covers arts and entertainment for Metro Weekly. He can be reached at ahereford@metroweekly.com. Follow him on Twitter at @here4andre.
← Previous Story WPA and Tiona Nekkia McClodden offer a daring departure from Mapplethorpe’s “The Perfect Moment”
Next Story → Spotlight: A Very Merriweather Christmas at Hillwood