From candidates who support conversion therapy to those who use sexuality as an attack, these are the races that matter most -- and that ultimately impact LGBTQ rights

By John Riley on October 31, 2019 @JohnAndresRiley 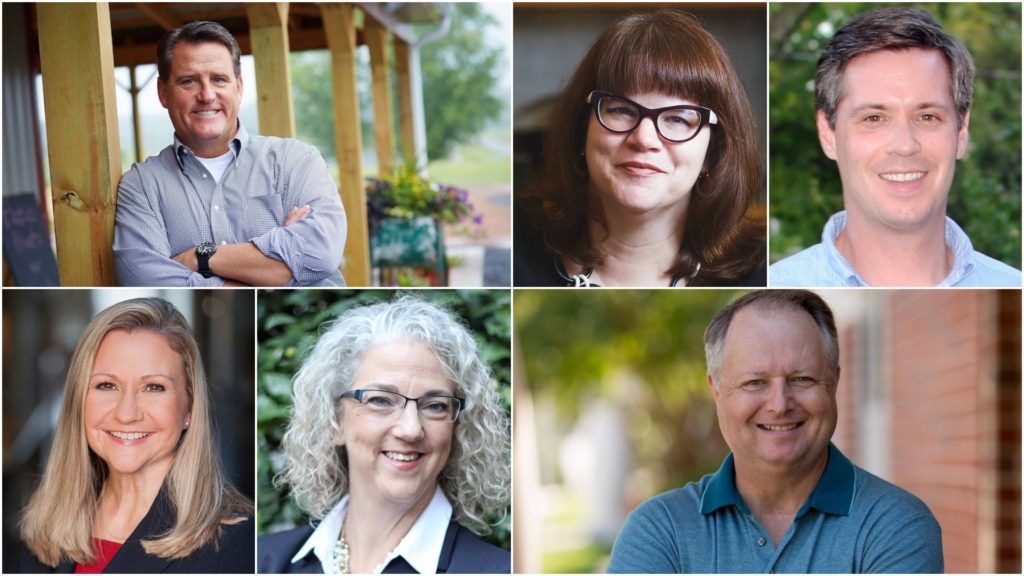 On Nov. 5, Virginia voters will head to the polls to elect their representatives in the General Assembly for the next two years.

Democrats, now out of power for two decades, are seeking to take back the legislature, which will allow them to introduce and hold votes on bills that have been repeatedly tabled or defeated with Republicans in power.

While each of the 140 General Assembly races has its own twists, turns, and larger-than-life characters, these key Senate races are some of the most competitive, with principals that grab headlines for their actions. From a state senator who supports conversion therapy and believes LGBTQ people are just “confused,” to another who invoked an openly gay colleague’s sexual orientation in an attempt to show how “radical” he was, these races underscore the importance of who gets elected — and what the polices they’re pushing could mean for LGBTQ Virginians.

Below are eight of the more competitive Senate races to watch this Election Day.

(For a deeper dive on what the election could mean for LGBTQ rights, head here.) 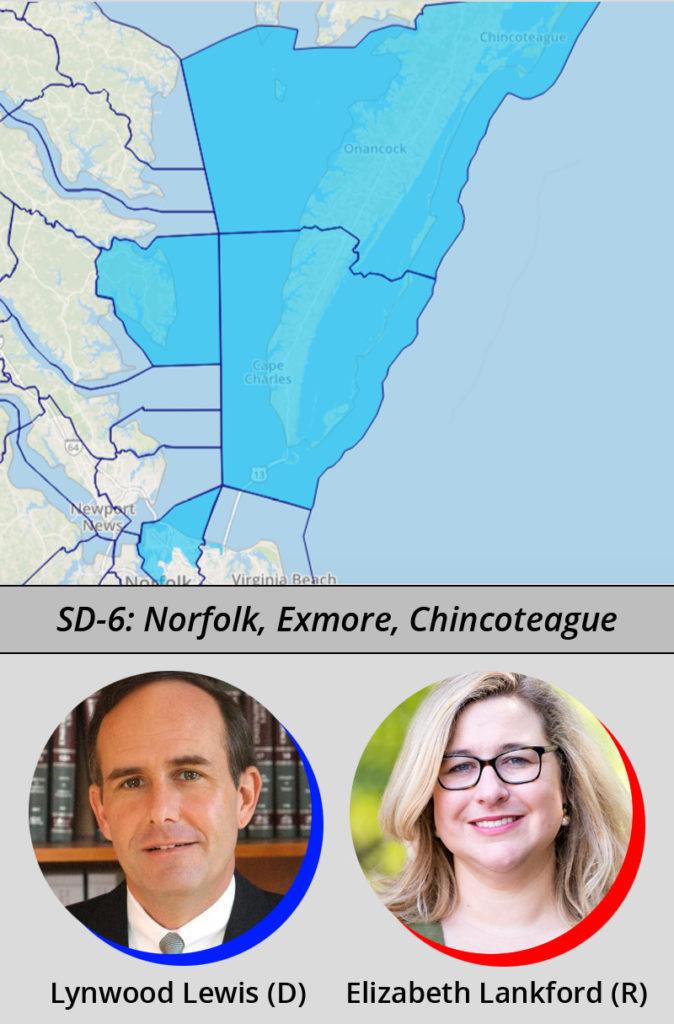 Lewis, who represents a district that includes rural areas on Virginia’s Eastern Shore, was first elected to this seat in 2014, winning by a margin of 11 votes. While the district contains a significant portion of Norfolk and part of Virginia Beach, voter turnout in those areas is typically low. That means that Lewis must rely on turning out Democratic voters in urban and suburban areas to offset the heavy Republican lean of Accomack County.

Lewis tends to be a more conservative Democrat, but has always been supportive of LGBTQ rights. Lankford, for her part, also says she supports banning discrimination based on sexual orientation or gender identity. Much of Lankford’s rationale for running is to improve the climate for small business owners like herself. Lewis, for his part, has advocated for increased education funding, infrastructure spending, and funding to deal with sea-level rise — but all of those bills he supported were killed by the Republican-led Senate. 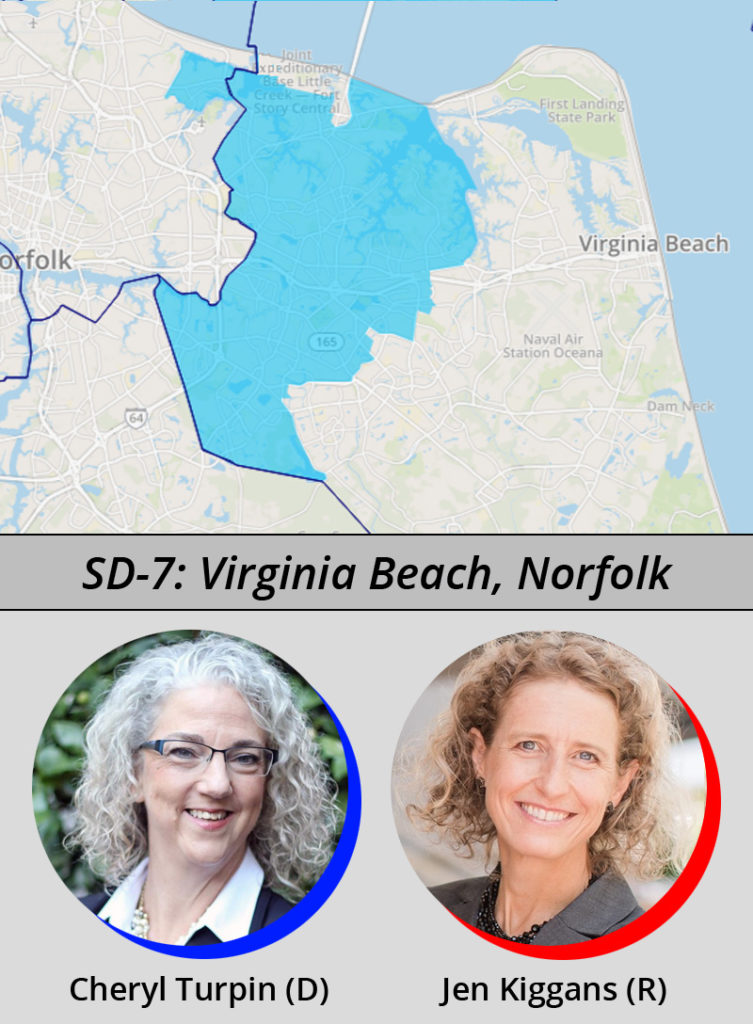 Kiggans has no known record on LGBTQ issues, while Turpin has consistently expressed support for nondiscrimination protections. However, due to Republican control of committees in the House, Turpin was never allowed to cast votes on those bills, as they were killed in committee. Politically, the 7th District is one of the most evenly-split Senate districts in the commonwealth. As such, a large or higher-than-expected Democratic turnout could give the edge to Turpin. 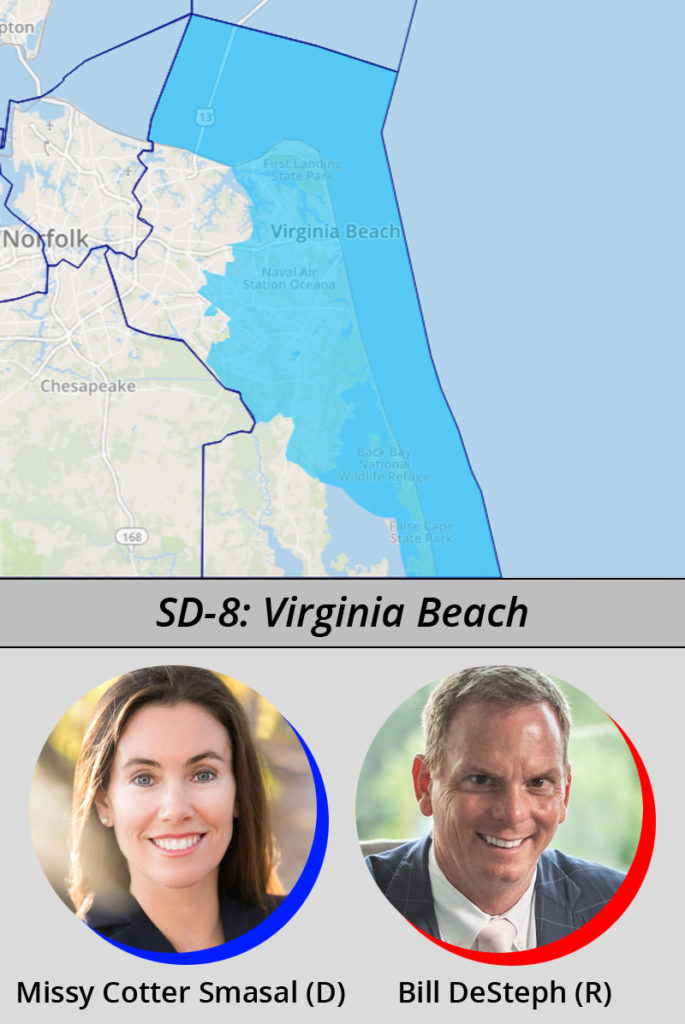 Sen. Bill DeSteph has generally had a favorable record on LGBTQ issues, having voted in favor of a bill to prohibit housing discrimination. His opponent, Missy Cotter Smasal, is a Naval veteran and small business owner. This district favors Republicans, but is one of those suburban-style districts, similar to many U.S. House seats, where highly educated and wealthier voters have soured on the Republican Party, thus making the seat more competitive. DeSteph is probably safe, but if Cotter Smasal keeps it close or even leads on Election Day, Democrats have probably already taken the majority by picking up more liberal-leaning seats. 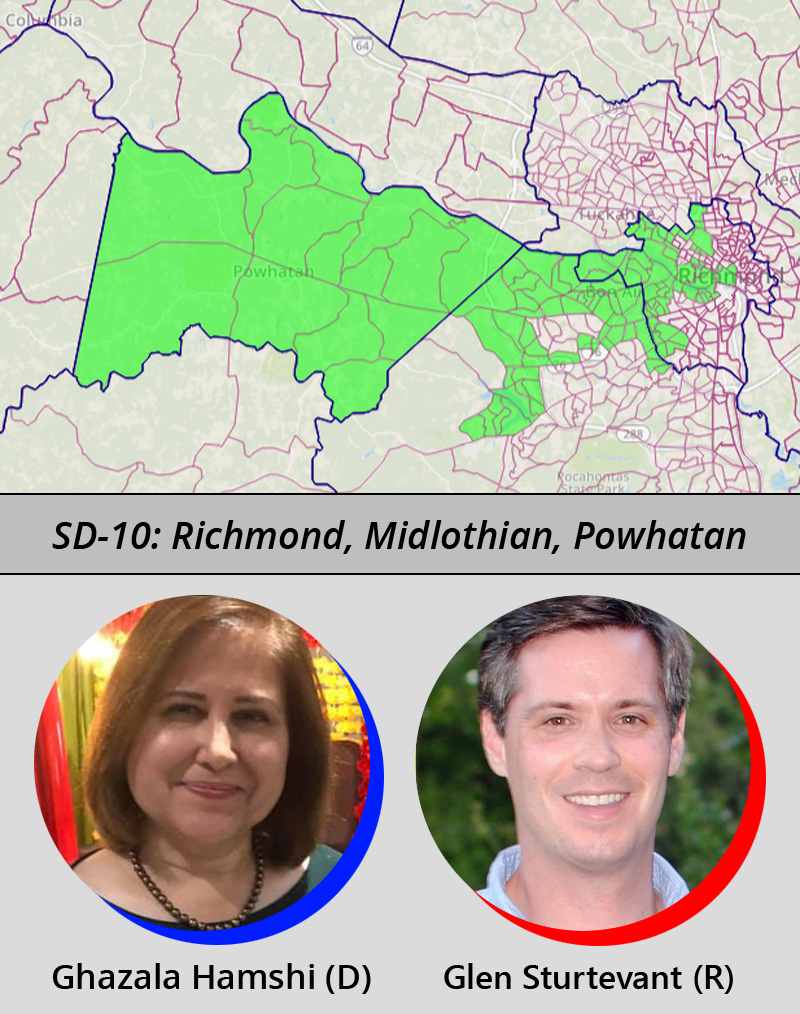 Glen Sturtevant, like his predecessor, John Watkins, is probably on borrowed time in this district, especially in an age of partisan polarization. The 10th District favors Democrats on paper, but low voter turnout in 2011 and 2015 allowed the GOP to run up large margins in heavily-Republican Powhatan County to offset any margin of victory Democratic challengers had coming out of the city of Richmond.

Democrats are running Ghazala Hashmi, the founding director of the Center for Excellence in Teaching and Learning at Reynolds Community College. Sturtevant has a generally pro-LGBTQ record, having voted in favor of bills to prohibit discrimination in housing and public employment. 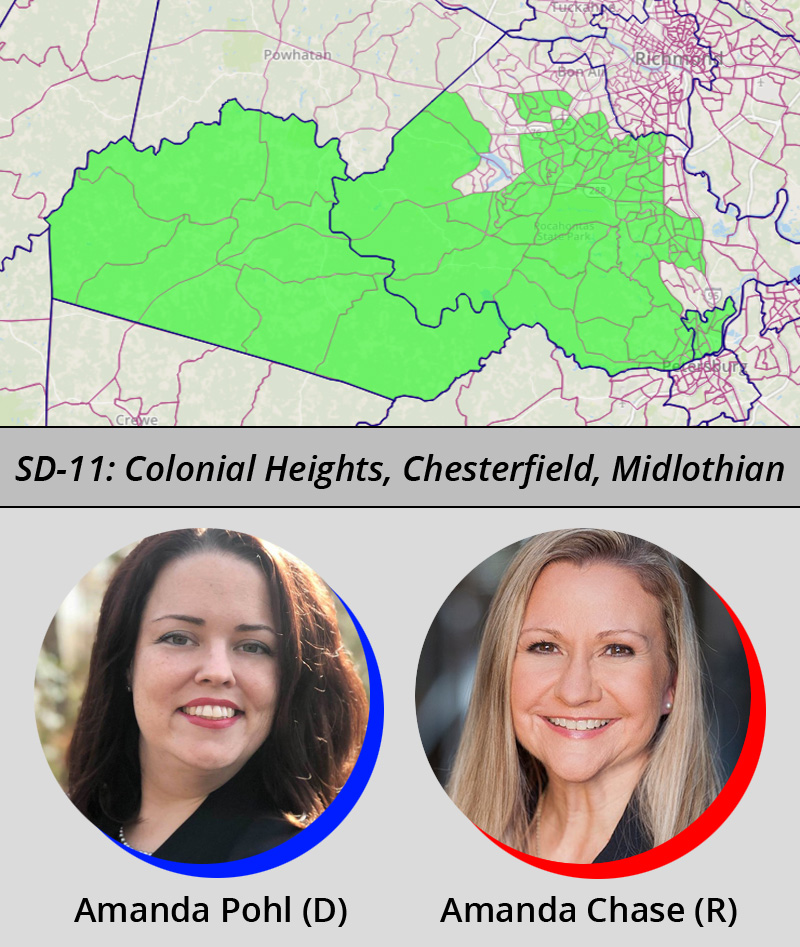 Sen. Amanda Chase first won her seat by mounting a successful “Tea Party”-style challenge to incumbent Republican Sen. Stephen Martin. She won re-election by a wide margin in a heavily Republican district, but state Republicans have reportedly cut off her funding, in part because she has been expelled from the Chesterfield County Republican Party after she endorsed an independent candidate for sheriff against the Republican incumbent, Karl Leonard.

But the story goes much deeper than that: apparently the tiff between Chase and Leonard stems from an altercation she had with a Capitol Police officer in which she spewed profanities at the officer after being told she was not allowed to park in a secured pedestrian plaza outside the Capitol. Chase accused Capitol Police of acting like “Democratic operatives,” and attempted to bully the officer while refusing to move her car.

After the incident came to light, Leonard said he could not support her until she apologized publicly to the officer, which apparently led Chase to endorse his opponent. Leonard has also taken issue with a claim, made by Chase, that Chesterfield is a “sanctuary city” for undocumented immigrants, which he says is patently false.

Chase has also garnered headlines for openly carrying a loaded firearm, inside of a custom-made holster, into a Senate Committee hearing, as well as controversial statements she’s made in the past, such as saying the only women who get raped are those who are “naive and unprepared” to defend themselves.

On LGBTQ issues, Chase’s record is dismal. She produces her own weekly radio show, during which she called homosexuality “sexual dysphoria” and claimed that LGBTQ people, especially transgender individuals, are “confused” about their sexual orientation and gender identity.

Chase has maintained that she opposes electroshock and other torturous forms of therapy, but insists they are not used in this day and age. She opposes bans on conversion therapy, saying that such bills limit religious freedom and the free speech rights of therapists. Additionally, she believes parents who believe homosexuality is sinful should have the right to force their children to undergo therapy that affirms their religious beliefs, saying: “Some parents believe along with their kids that homosexuality is a sin, and, you know, they need options.” 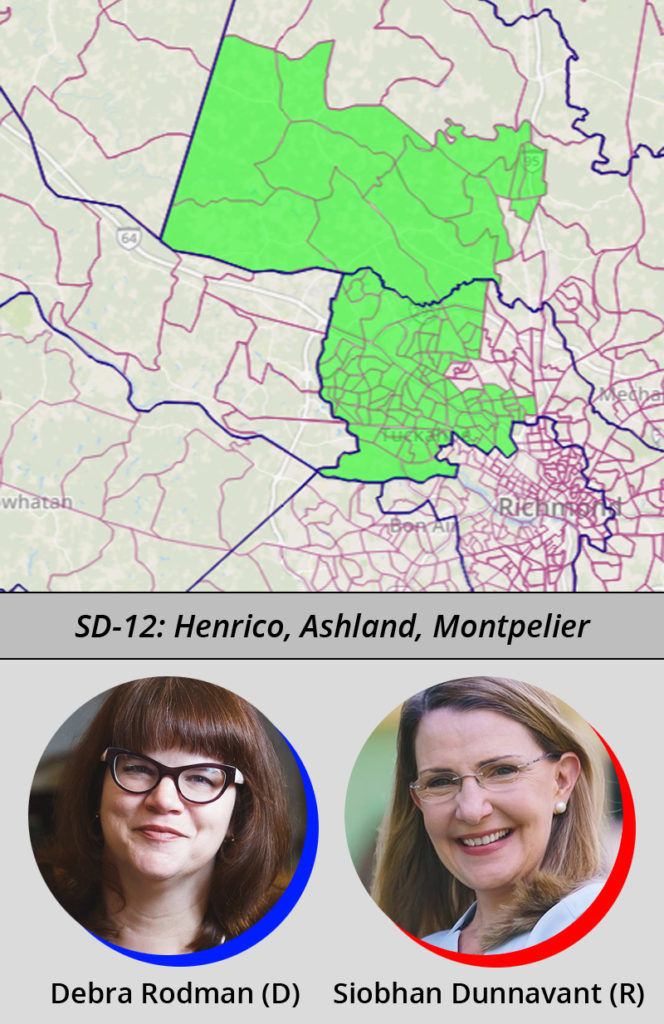 Much like the 7th District, the 12th District is a marginally Republican district that has been trending towards Democrats in recent years. Sen. Siobhan Dunnavant, an obstetrician and gynecologist by trade, is a center-right conservative who fits the district well. She also comes from a prominent Virginia political family, with her brother, Chris Stolle, serving as a delegate from Virginia Beach, and her brother, Ken Stolle, a former state senator, now serving as the Sheriff of Virginia Beach.

While Dunnavant is generally socially conservative, she has voted for nondiscrimination bills when they come before the Senate. Democrats have attacked Dunnavant for opposing three bills that would seek to ban conversion therapy, but Dunnavant has argued on her campaign website that her record is being unfairly distorted. She says she condemns sexual orientation change efforts, and is concerned about the high rate of suicide attempts by those subjected to it. But she says she opposed the three bills because she believes that medical boards and the experts that sit on them are more knowledgeable and better poised to regulate potentially harmful therapies and determine best practices for mental health practitioners.

Due to the bills’ failure in the General Assembly, three state boards that regulate mental health professionals have since adopted guidance banning the practice of conversion therapy on minors. However, some conservative activists are challenging that guidance, arguing that, because the General Assembly did not explicitly approve a “ban” on the therapy, the boards have overstepped their authority and the guidance is unconstitutional.

Dunnvant’s general election opponent is Del. Debra Rodman, a first-term lawmaker, who sponsored legislation to prohibit health insurers from discriminating against transgender people by refusing to cover medically necessary treatments or surgeries. Rodman has also expressed support for an outright legislative ban on conversion therapy, legislation prohibiting discrimination in employment and housing, and was one of the most vocal advocates for Virginia’s successful vote to expand Medicaid under the Affordable Care Act. 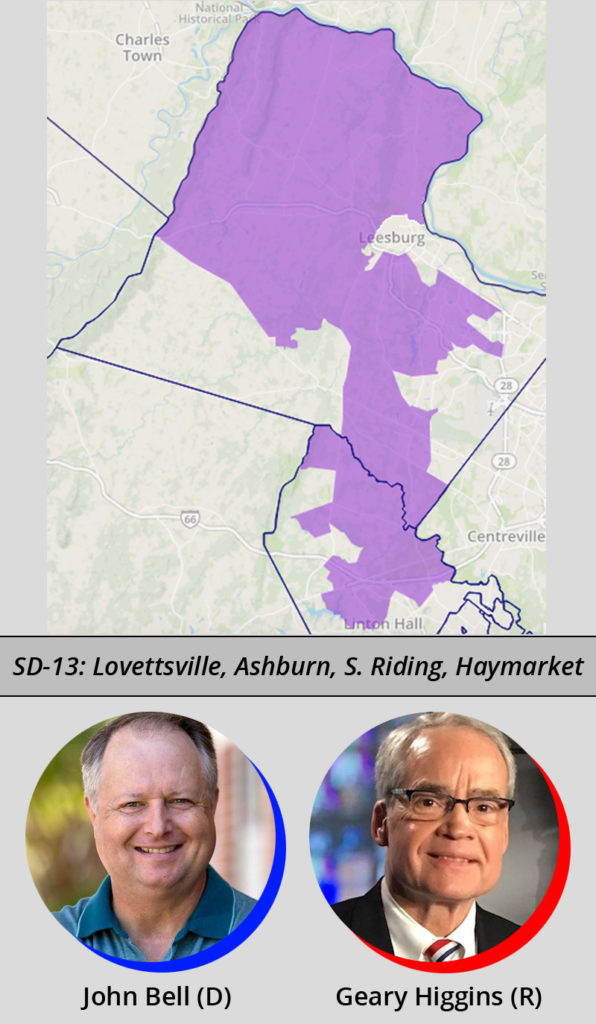 This open seat, held by the retiring Sen. Dick Black (R-Leesburg), narrowly favors Democrats on paper, but has historically been socially conservative. Republicans have nominated Loudoun County Supervisor Geary Higgins, who ran during the primary as the more conservative candidate, while Democrats have nominated Del. John Bell, a rising star in the Democratic Party.

On LGBTQ issues, Bell has been a strong advocate for nondiscrimination bills, ending conversion therapy, and expanding hate crime protections. Higgins, like his fellow Republicans on the Loudoun County Board of Supervisors, has attempted to avoid LGBTQ issues, even voting against a resolution to recognize LGBTQ Pride Month in the wake of the Pulse nightclub massacre. He has justified this by saying that county boards should be focusing on economic issues like taxes or transportation, rather than issuing proclamations. 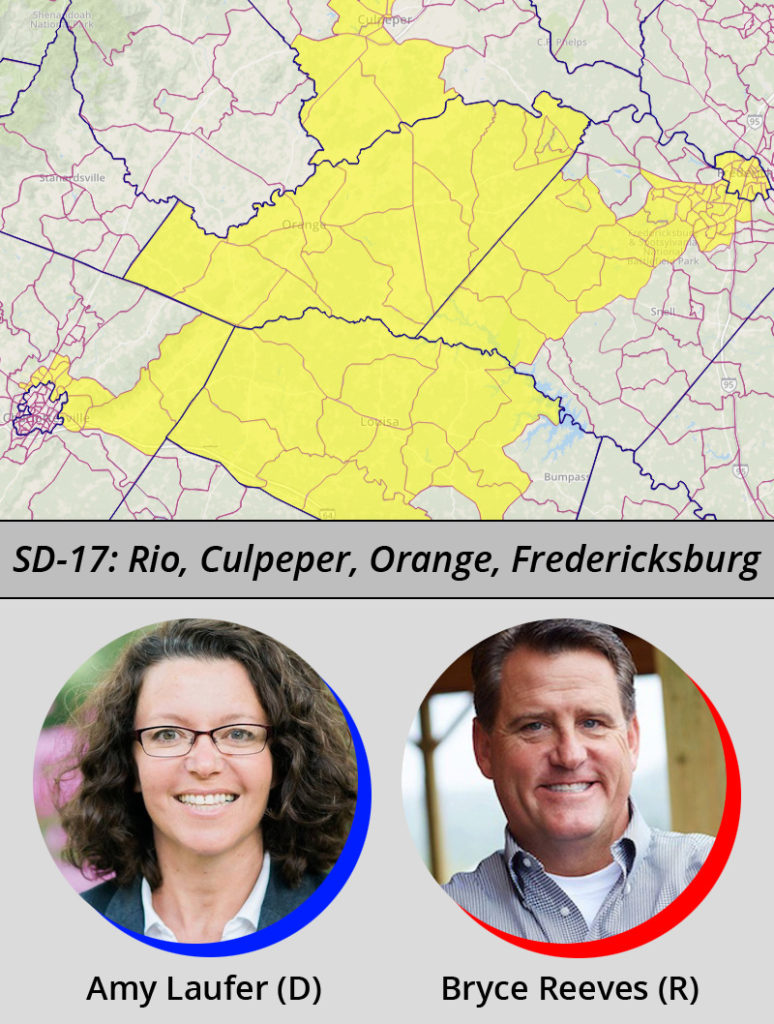 Another “reach” district for Democrats, this Central Virginia district, which stretches from the Charlottesville suburbs through rural areas to encompass the city of Fredericksburg, is actually less Republican than parts of Virginia Beach. The Republican incumbent, Bryce Reeves, has become famous for his grandstanding on social issues. When he sought the Republican nomination for lieutenant governor two years ago, Reeves attacked eventual nominee and fellow Sen. Jill Holtzman Vogel (R-Upperville) for voting to confirm Tracy Thorne-Begland, an openly gay judge, as well as for supporting bills to ban anti-LGBTQ discrimination in housing and public employment.

In July, Reeves attended and spoke at a closed NRA town hall members, attempting to scare them by invoking a parade of horribles that would occur should Democrats take control of the legislature. To justify this, he invoked the sexual orientation of fellow Sen. Adam Ebbin (D-Alexandria), the only out gay state senator in Virginia, accusing Ebbin of wanting to “radically change Virginia” and criticizing Ebbin’s “really liberal” positions, including his support of gun reform and raising the minimum wage. (Reeves later issues a statement saying he meant “no disrespect” to Ebbin.)

Reeves’ opponent is Amy Laufer, a former school teacher, stay-at-home mom, and founder of Virginia’s list, a political group supporting Democratic women who run for office, has called out Reeves for his statements on Ebbin as well as his record. She also pushed back against “sexist” comments Reeves made saying Laufer “stays home all day” and depends on her husband to provide her with everything.

John Riley is the local news reporter for Metro Weekly. He can be reached at jriley@metroweekly.com
← Previous Story Virginia Elections: LGBTQ Rights Are at Stake on the Ballot
Next Story → Danica Roem targeted by anti-trans Facebook ad