Suspect says he retrieved the attacker's jacket for him, but did not commit the assault that killed Juan Fresnada

By John Riley on January 6, 2020 @JohnAndresRiley 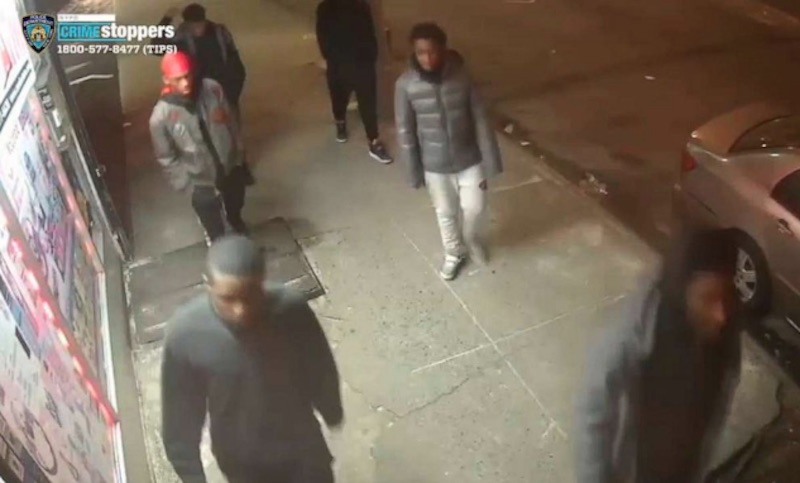 A screenshot of the suspects – Photo: NYPD Crime Stoppers.

New York City police have arrested a teenager, and are searching for other suspects, after a gay 60-year-old Bronx man was killed during a robbery in which he was mugged for $1.

Police arrested Abu Conteh, 18, charging him with murder and gang assault charges for an attack on Juan Fresnada and his partner Byron Caceres as they were leaving a McDonald’s on Third Avenue near East 164th Street around 1:30 a.m. on Christmas Eve.

According to police, the men were approached by the muggers, who demanded their property and even attempted to follow them into a store.

After they refused to hand over any money, they were attacked, with their assailants taking $1 in the process.

Surveillance footage from nearby cameras shows three men punching and kicking a person, believed to be Fresnada, eventually hitting him with a steel garbage can before fleeing down East 165th Street.

Fresnada was transported to Lincoln Hospital and treated for swelling to his brain, eventually dying on Dec. 27.

It is not clear how many suspects remain at large, but witnesses say at least five men took part in the attack.

Police are trying to use the surveillance video footage to identify the attackers, and say the group ranges in age from teens to early 20s.

Police do not believe the attackers were motivated by the couple’s sexual orientation. As such, the NYPD is not investigating the incident as a hate crime.

But Conteh told the New York Daily News in an interview that he is being charged with a crime that he didn’t commit.

“We was at the wrong place at the wrong time,” Conteh said. “Now I’m afraid I’ll be sentenced for something I didn’t do.”

He claimed that he and two friends attended a house party that evening, along with the attackers. He and his friends happened to stumble across the attack, but did not take part. He claims the lead attacker asked him to retrieve his jacket for him.

Related: Gay Bronx man dies from injuries after being beaten and robbed for $1

“He had taken off his jacket nearby and he tells me ‘Get my jacket,’ and I was scared,” Conteh told the Daily News. “I dunno what this guy could do. He had just beat a man so I went and got it for him and gave it to him.”

He and his friends tried to return to the party, but when they were denied admittance, he went home, he said.

Conteh said he and his friends went inside a deli and alleges that police saw footage from that moment and confused him with Fresnada’s attackers.

“They brought me in for questioning and now I’m here,” he said. “I didn’t do it… I never touched that man.”

Tips can also be submitted online via the Crime Stoppers website or via Twitter @NYPDTips. All correspondence is confidential. Those leaving tips that lead to the arrest and indictment of a suspect may be eligible for a monetary reward.

John Riley is the local news reporter for Metro Weekly. He can be reached at jriley@metroweekly.com
← Previous Story Pete Buttigieg claps back after Trump says he’s ‘pretending’ to be Christian
Next Story → Gay Michigan hairstylist killed and mutilated after meeting up with Grindr contact