By John Riley on January 3, 2020 @JohnAndresRiley 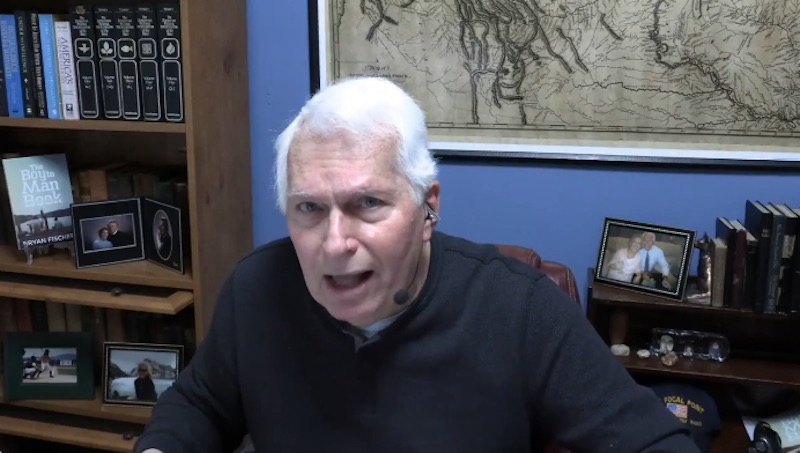 Conservative radio host Bryan Fischer has dredged up a falsehood linking the modern-day LGBTQ rights movement with Nazism, alleging that the Nazi Party started in “a gay bar in Munich.”

Fischer made the comments — which have been repeated ad nauseam by some social conservatives over the years — on Dec. 31 during his show Focal Point, which airs on American Family Radio, the radio station of the anti-LGBTQ American Family Association.

It came during a segment lamenting the recent move by lawmakers in Germany to ban conversion therapy.

Fischer suggested that banning therapies that attempt to change a person’s sexual orientation or gender identity — or as conservatives now refer to it, “unwanted same-sex attraction” — is inhumane to young people who want to be “normal.”

“If you want to adjust your sexual understanding, your view of your own sexuality to comport with what is normal and right and healthy and normative, Germany will not let you do it,” Fischer said. “They’re gonna confine you to your sexually deviant lifestyle for the rest of your life.”

Most mainstream medical and mental health practitioners say that there is no evidence that conversion therapy works, and may even contribute to lower self-esteem and higher rates of depression, self-harm, and suicidal ideation.

Nonetheless, Fischer continued his rant, saying the ban on conversion therapy is “not a good thing for Germany’s future,” the media watchdog organization Media Matters for America reports.

Fischer went on to say that Hitler did send some homosexuals to concentration camps and to their eventual deaths in the gas chambers, but claims that the Third Reich only did that with “effeminate” gay men, while “the Greek homosexual idea, the muscular, masculine homosexual” was spared.

“In fact,” Fischer added, “in a lot of homosexual circles, they will dress up in Nazi gear as kind of reminiscent of how the entire Nazi Party got started.”

Fischer’s remarks are not the first time that he — or other anti-gay activists — have dredged up this trope of equating LGBTQ people to Nazis, as part of a longer, extended analogy in which LGBTQ people, by demanding equality, are trampling on the rights of religious people.

Thus, they allege, if LGBTQ rights are allowed to flourish, LGBTQ people will one day persecute social conservatives in the way that Nazis targeted Jews, Roma, homosexuals, intellectuals, and the disabled.

Laurie Marhoefer, a historian at the University of Washington, wrote an article for Slate in 2018 analyzing and thoroughly debunking this oft-repeated myth, which is based on one the fact that one high-ranking Nazi official, Ernst Röhm, was known to be gay.

Hitler eventually had Röhm assassinated with other high-ranking military officials on “The Night of the Long Knives” about a year after seizing power.

But as Marhoefer writes: “The reason this myth is circulating now is that the Republican Party has lurched to the far right and homo- and transphobia is in style. Equating fascism with homosexuality gets the right off the hook — right-wingers are against homosexuality, so they can’t be fascists. It makes gay men responsible for fascism, and therefore dangerous and loathsome.

“At the same time, it erases the history of violence against gay men carried out in the name of a sodomy law,” she notes. “The logic here is twisted to be sure, but when one follows it, gay rights seems dangerous, rolling back gay rights seems perhaps a good idea, and sodomy laws don’t seem so odious.”