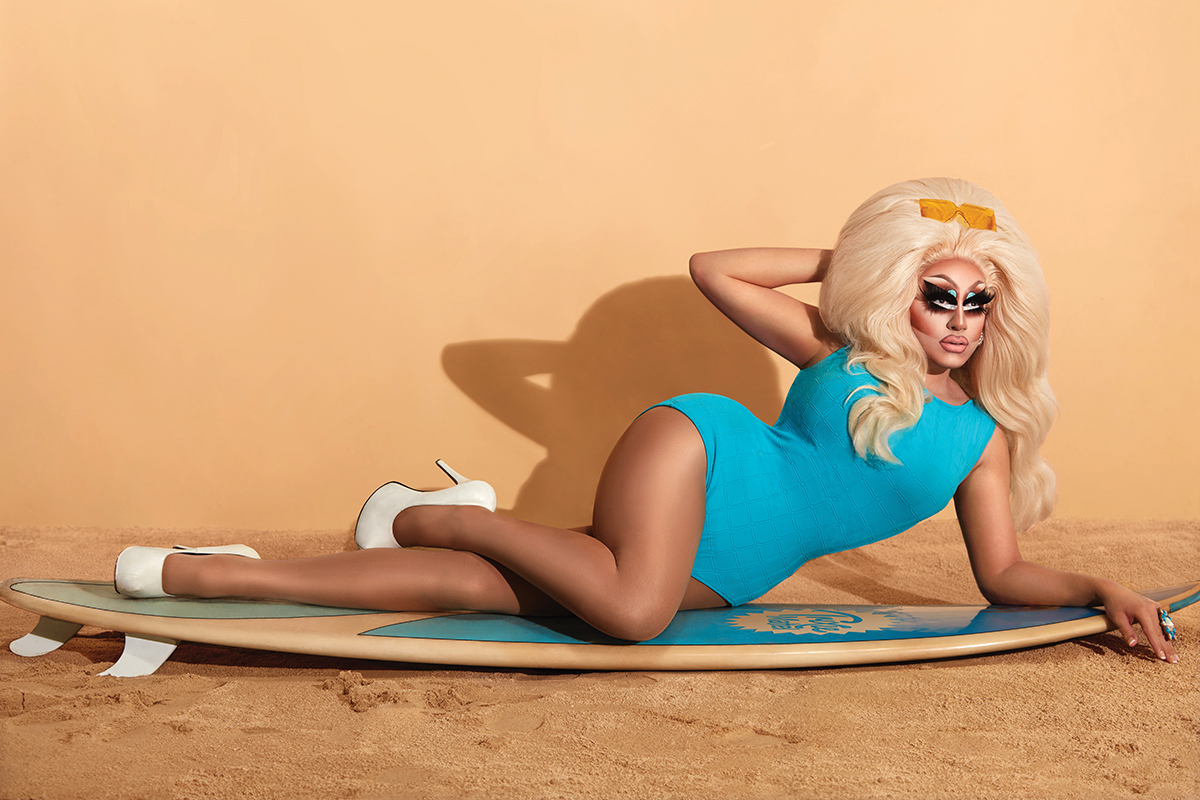 Alongside comedian, performer, YouTube star, makeup baroness, and Drag Race alumna, Trixie Mattel’s role as a chart-topping folk musician has always looked a bit like the odd one out among her many personas. While Two Birds and One Stone were full of personality and contained flashes of humor, Barbara (★★★★☆) comes close to marrying her musical career to the performer. With Barbara, she has brought every facet of herself to bear on what is her most quintessentially “Trixie Mattel” album yet.

The album embraces a much wider musical range than Two Birds, expanding beyond the folk-country sensibility and trading it for electric guitars and more of a pop-rock sound that has a vaguely vintage feel to it, along with songwriting that has lost none of its humor, heart, or depth.

The album opens on a strong note with “Malibu,” a surf pop-inflected song that celebrates making an impulsive decision and having it turn out great. Forget for a moment how different this is from her country albums — this song is Trixie Mattel at her most Trixie, bringing in her toy doll persona with a line about being kept in a drawer and referencing a transistor radio for a bit of retro charm. The sound may be different, but the thoughtful poignancy lurking behind the catchy melodies is very much true to her brand.

“Jesse Jesse” starts out feeling almost like it should be a song about a schoolyard crush, with Trixie dreaming about being “Jesse’s girl,” but as it goes on she hints that something not entirely healthy is going on here. Perky lyrics (“I know you’re married/And separation can be scary”) walk the line between a crush and obsession, all played for laughs, of course. The song also offers up the eyebrow-raising line, “Inside every clam’s a pearl.”

Although Barbara serves up more of Mattel’s well-known flair for camp, it’s mostly front-loaded into the first four tracks. Side B is more what we have come to expect from Mattel’s — top-tier folk that would have been right at home on Two Birds and One Stone, but rarely pushing beyond that. “Gold” brings back the acoustic guitars and falls squarely into the category of wistful country-folk, territory that she remains in for the rest of the album. “I Do Like You” longingly reflects on a relationship that no clearly longer works, where the love is still there but everything else seems to have quietly faded away. Solid as these later tracks are, they deliver less of her trademark wit.

Fittingly, Mattel closes out the album by paying tribute to the queer country legends of Lavender Country with “Stranger,” her cover of their 1973 track, “I Can’t Shake the Stranger out of You.” It’s a song that works well for the artist, who stays true to the pathos of the original recording, adding her own distinct croon and letting it build up beyond its DIY feel.

As different as it is from the bubbly fun of “Malibu,” closing out Barbara on this note reminds us that Trixie Mattel’s great strength as a musician is her ability to marry a deeply irreverent comedic sensibility with a clear respect for the people and places from which she has drawn inspiration.

Barbara releases on Friday, Feb. 7 on Amazon.com, iTunes, and on most streaming services.