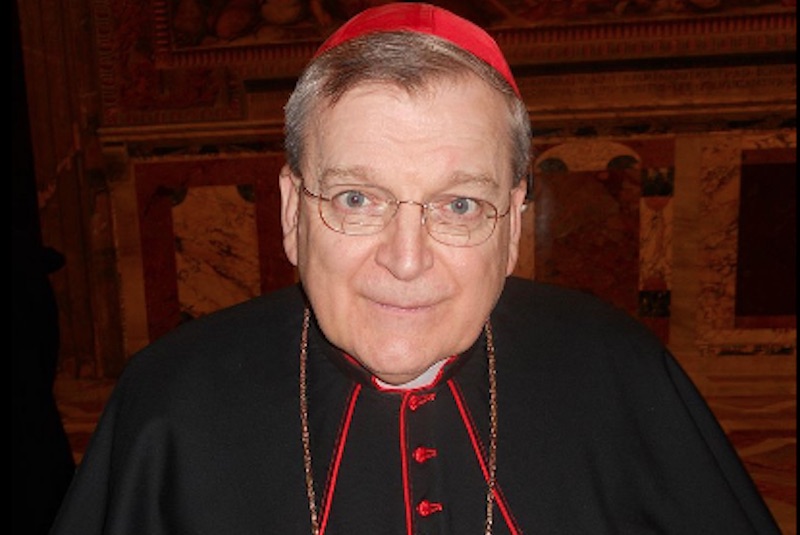 A Catholic cardinal known for railing against acceptance of LGBTQ identity has urged Catholics to return to church and attend Mass, even as they try to “socially distance” themselves amid the COVID-19 pandemic.

In doing so, he cited popular culture’s “attack on the integrity of human sexuality” as justification for returning to the church in order to draw closer to God.

Cardinal Raymond Burke penned an open letter to the faithful on March 21, in which he lamented that the precautions people — both in Italy, where he lives, and the United States, his home country — are taking to avoid becoming infected with the coronavirus, while also asking Catholics to pray for those who are sick and for an end to the pandemic.

In the letter, Burke laments the economic devastation that will be caused by closures responding to the threat of the virus, while also urging people to take “every prudent means” to avoid becoming infected or infecting others.

But, Burke notes, just as people who are socially distancing are expected to go out to the grocery store for necessities, Catholics must “acknowledge our total dependence upon [God] and, therefore, to pray daily to Him and to offer Him our worship.”

“In combatting the evil of the coronavirus, our most effective weapon is…our relationship with Christ through prayer and penance, and devotions and sacred worship,” Burke writes. “We turn to Christ to deliver us from pestilence and from all harm, and He never fails to respond with pure and selfless love. That is why it is essential for us, at all times and above all in times of crisis, to have access to our churches and chapels, to the Sacraments, and to public devotions and prayers.”

Burke then pivots, getting in a jab at what he sees as corrupting influences, including a lack of respect for “human life,” especially as it concerns the unborn, the elderly, and those with serious illnesses, and paganism that “worships nature.”

“Likewise, we need only to think of the pervasive attack upon the integrity of human sexuality, of our identity as man or woman, with the pretense of defining for ourselves, often employing violent means, a sexual identity other than that given to us by God. With ever greater concern, we witness the devastating effect on individuals and families of the so-called ‘gender theory,'” Burke adds.

He then asserts that Catholics can easily practice social distancing in a sufficient enough way to protect themselves while following through with their obligation to attend weekly Mass.

“In our totally secularized culture, there is a tendency to view prayer, devotions and worship like any other activity, for example, going to the cinema or to a football game, which is not essential and therefore can be cancelled for the sake of taking every precaution to curb the spread of a deadly contagion,” Burke writes.

“But prayer, devotions and worship, above all, Confession and the Holy Mass, are essential for us to remain healthy and strong spiritually, and for us to seek God’s help in a time of great danger for all. Therefore, we cannot simply accept the determinations of secular governments, which would treat the worship of God in the same manner as going to a restaurant or to an athletic contest,” he concludes.

Burke, who previously served as the Archbishop of St. Louis, has made other comments over the years in which he casts LGBTQ acceptance as a corrupting influence, blaming homosexuality as the cause of the clerical sex abuse crisis, and criticizing clergy within the church for spreading the “plague of the homosexual agenda” and for fostering a “climate of complicity and conspiracy of silence” by failing to expose suspected abusers.

Burke has called homosexuality a “tendency that is disordered” and needs to be “purified at the root.” He has also called it “evil” and “wrong” and supported those who speak out against or discourage homosexuality, saying they are “simply announcing the truth, helping people to discriminate right from wrong in terms of their own activities.”

He has also urged families to effectively shun LGBTQ members, saying that parents should be careful not to “expose” children to homosexuality or same-sex relationships.

John Riley is the local news reporter for Metro Weekly. He can be reached at jriley@metroweekly.com
← Previous Story Grindr hookup led to gay teen being stabbed more than 100 times
Next Story → ‘Cold-blooded killer’ who stabbed gay teen more than 100 times jailed for life