Bishop Thomas Tobin's tweet was met with derision on social media, with many noting the Catholic Church's sex abuse scandals 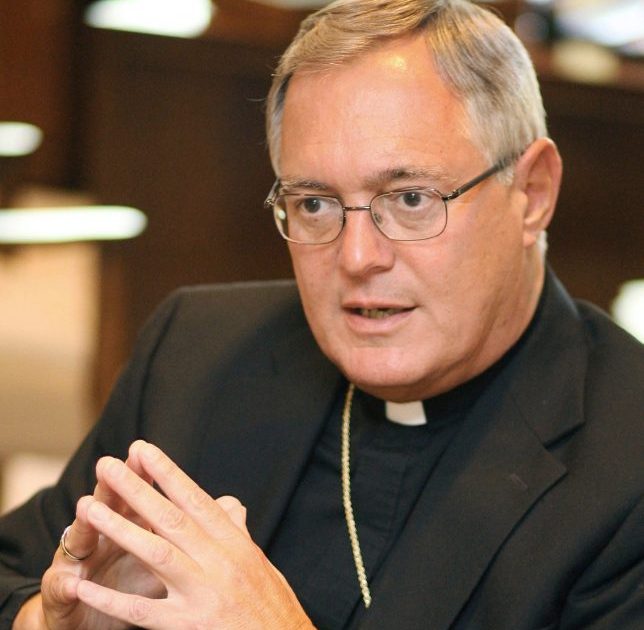 A bishop in Rhode Island has told Catholics not to attend Pride Month events because they are “harmful for children.”

Thomas Tobin, a Roman Catholic bishop in Providence, R.I., tweeted that Catholics should avoid any LGBTQ events during June, official Pride Month, because such events are “contrary” to the Catholic faith.

“A reminder that Catholics should not support or attend LGBTQ ‘Pride Month’ events held in June,” Tobin tweeted. “They promote a culture and encourage activities that are contrary to Catholic faith and morals. They are especially harmful for children.”

Unsurprisingly, Bishop Tobin’s claim that Pride events are “harmful to children” was met with derision on social media.

Many noted that the sex abuse scandals plaguing the Catholic Church — and subsequent attempts to cover them up — are arguably of greater harm to children.

“The day I listen to a single guy in a clerical collar tell me what’s harmful for children…” tweeted Ryan Jespersen, an Edmonton, Alberta, radio host, with a GIF saying, “It’d be a cold day in hell.”

The day I listen to a single guy in a clerical collar tell me what’s harmful for children… pic.twitter.com/vLI7B9eiMX

“This is pure ignorance & bigotry. Ignore this hate-filled hypocrite,” she tweeted. “His mind set leads only to suffering. He brings to mind those priests who molested my brothers. Of COURSE we should embrace our LGBTQ brothers and sisters and children. Jesus spoke of love.”

She added that children are “in far more danger” at a Catholic church than a Pride event.

Kids are in far more danger at a catholic church than at a gay pride gathering.

Actor Wilson Cruz said the Church been “proven to be actually harmful to children.”

You know what’s proven to be actually harmful to children..? The Catholic Church.

It was a sentiment echoed by former world tennis star player Martina Navratilova, who said that Catholic clergy have been “a lot more dangerous to kids than LGBT [people].”

A reminder that Catholic clergy has been a lot more dangerous to kids than LGBT. Just so you don’t forget….

The Catholic Church has wrestled with LGBTQ issues in recent years, particularly since Pope Francis ascended to the papacy.

Some LGBTQ people expected Francis to be a more moderate voice on LGBTQ issues, but his record has been somewhat mixed on the issue.

Earlier this year, Francis was asked by a group of gay Catholic priests to not endorse efforts to ban gay men from the priesthood.

In a letter to Francis, signed by the Netherlands-based Working Group of Catholic Gay Pastors, the men objected to the Pope’s past statements on the matter and the continuation of a policy that prevents openly gay men from being ordained.

Last December, Francis said in an interview that the issue of gay clergy members “worries” him, calling “the issue of homosexuality” a “very serious matter,” and saying that sexuality must be “adequately discerned” from prospective clergy candidates.

The Pontiff also said that it “seems that homosexuality is fashionable” in society, and “this mentality…affects the life of the Church.”

In May last year he told bishops to seek out and prevent gay priesthood applicants, telling them to “keep your eyes open” and “if in doubt, better not let them enter.”

Francis also condemned same-sex families at an event for Catholic families, saying same-sex couples did not deserve to have their families recognized by the Church, saying, “People speak of varied families, of various kinds of family [but] the family [as] man and woman in the image of God is the only one.”

In America, the Catholic Church has been embroiled in a number of LGBTQ-related controversies, including last month when a New Jersey church demanded that a private charter school remove a pro-LGBTQ mural from the school building, which is owned by the church.

In March, a transgender man in California announced he was suing a Catholic hospital after they canceled gender confirmation surgery at the last minute, and refused to reschedule the operation.

And last year, the Archbishop of Philadelphia said that the is “no such thing as an ‘LGBTQ Catholic.’“

Archbishop Charles J. Chaput also said that the phrase “LGBTQ” should not appear in any Church documents.