A Republican candidate for Congress who was pardoned by Donald Trump has compared gay people to pedophiles on social media.

Angela Stanton-King, an author and former reality TV star, was pardoned in February after spending two years in prison on federal conspiracy charges for her role in a car theft ring, the Atlanta Journal-Constitution reports.

Last week, she announced her plans to run for a seat in Congress in Georgia’s 5th Congressional District, which is currently held by Democratic U.S. Rep. John Lewis, a civil rights icon and supporter of LGBTQ equality.

Since declaring her candidacy, Stanton-King has tweeted a number of homophobic and transphobic statements, including comparing gay men to pedophiles and conflating the fight for LGBTQ rights with support for pedophilia.

It’s part of a pattern of tweets stretching back almost a decade displaying animus towards LGBTQ equality and gay men in particular.

“Enough is Enough,” Stanton-King wrote in a since-deleted tweet on March 6, alongside an image which features a rainbow gun being held to a man’s head.

While Stanton-King deleted that particular tweet, others remain active on her social media, including another tweet again comparing LGBTQ rights with pedophilia.

“Gay means Men having sex with men,” Stanton-King wrote. “If you wouldn’t want your 12 yr old daughter advertising that she enjoys sex with men/boys why your 12 yr old son? This is confusion, pedophilia, and sexual exploitation wrapped up in acceptance.” 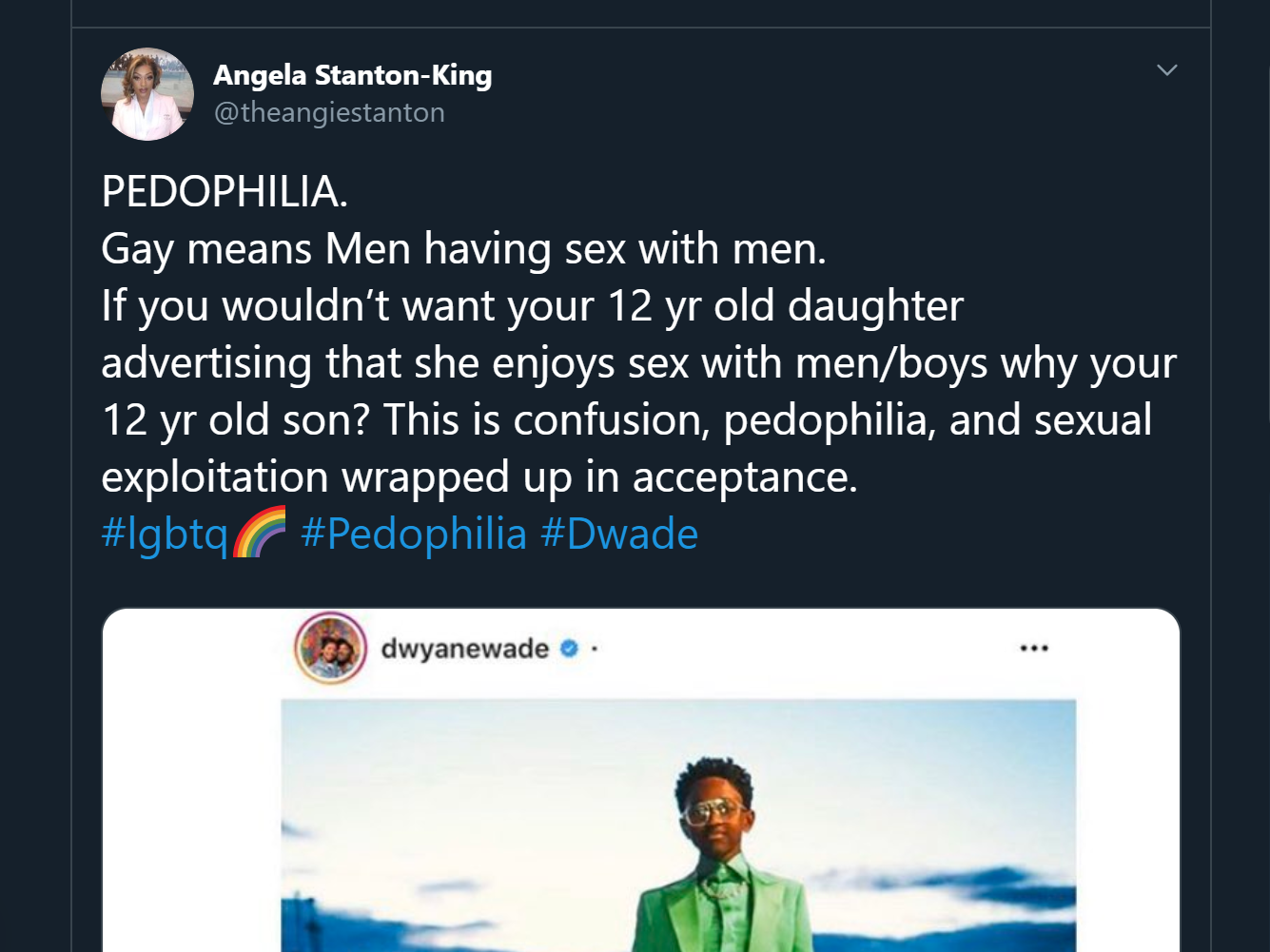 And in February, Stanton-King used an exchange between former Democratic presidential candidate Pete Buttigieg and a nine-year-old boy to once more suggest that gay people are pedophiles.

At a campaign event, the boy asked Buttigieg to help him “be brave” and “tell the world I’m gay,” which led to a heartfelt response from the former mayor, who became the first openly LGBTQ person to win a presidential primary.

“Why should boys as young as 9 have pride in being gay?” Stanton-King tweeted. “How do they know they like the feeling of something hard being rammed up their rectum? Why would you tell a child he’s brave for liking penis? Because that’s all gay means. I’m curious.” 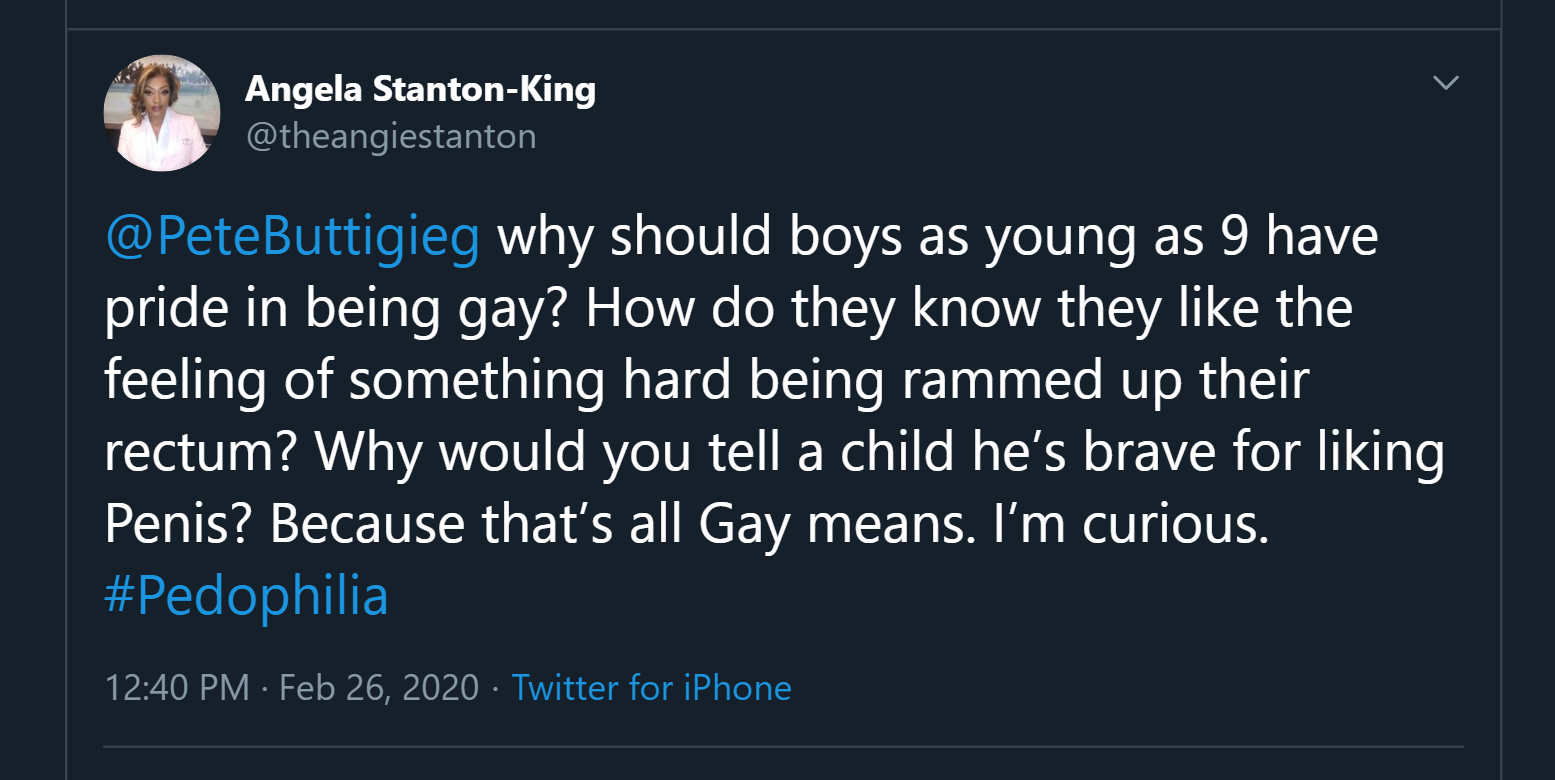 In January, she compared the Trump administration — which has been repeatedly criticized for attacking LGBTQ rights — to President Barack Obama’s pro-LGBTQ record 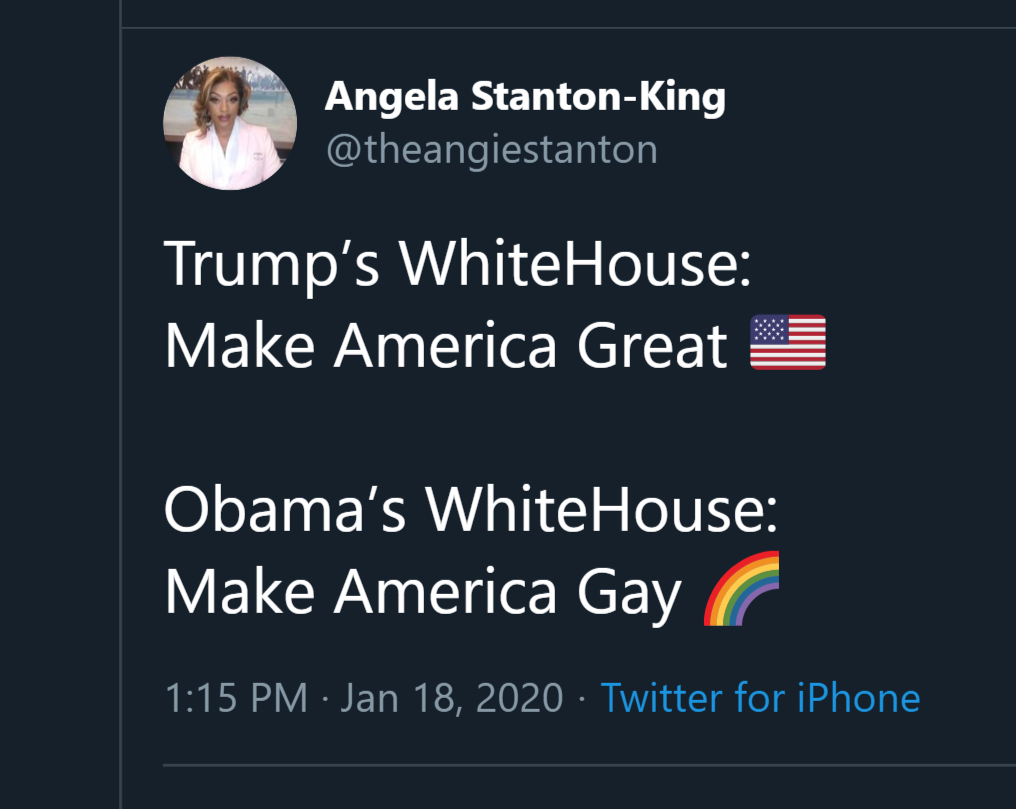 PinkNews identified tweets as far back as 2012 displaying Stanton-King’s anti-LGBTQ attitudes, including suggesting that sexual abuse causes homosexuality, and that she wouldn’t teach her sons that homosexuality is acceptable.

After Stanton-King’s views on LGBTQ people started to make headlines, she doubled down on her statements on Twitter, calling homosexuality a “sexual perversion” and again conflating it with pedophilia.

Responding to a headline reporting her anti-LGBTQ comments, she tweeted: “They want our sons bad. I knew this attack would be coming. But I’m willing to be the sacrifice! SAVE OUR SONS! Protect our children!”

“Again… men are not women,” Stanton-King wrote in a separate tweet. “Boys are not girls. Involving children in the sexualized perverted LGBTQ movement is Pedophilia.”

She also said that the “rainbow doesn’t belong to you it belongs to GOD!!!” and added the hashtag #LGBTQPIA+ — the P presumably referencing pedophilia, a common falsehood spread by conservative figures alleging that LGBTQ people are seeking to include pedophilia in the equality movement.

“Dear LGBTQPIA+,” Stanton-King later tweeted. “Help us understand why you have to flaunt your perverse sexuality.

“They have no answer only hateful remarks,” she continued. “They want to be accepted but don’t want to accept the people that don’t agree with perverseness of their lifestyle…. The minute you say a boy is a boy you’re homophobic and transphobic. No that’s not the case at all. They’re heterophobic!”

After a Twitter user challenged her on comparing all gay men to “violent pedophiles,” Stanton-King responded by saying, “Some Gay men… I never said all. Some straight men too.”

In a statement to NBC News after her comments came to light, Stanton-King said that she is “very concerned about the whole LGBTQ movement and the way it sexualizes children.”

“The LGBTQ community refers to people’s sexual preferences — lesbians like women, gay people like men — and children shouldn’t be walking advertisements for sexuality when they are not old enough to make their own decisions,” she said.

Despite previously tweeting that she would tell her sons it’s not okay to be gay, Stanton-King said she is “not against LGBTQ rights like same-sex marriage” because her 19-year-old son is gay, and a lesbian aunt helped raise her.

According to Grisham, the First Lady's chief of staff, Lindsay Reynolds, told her in early 2018 that one of Grisham's closest friends in the White House was being fired due to an "issue with his security clearance," despite having worked for former President Donald Trump for more than three years.