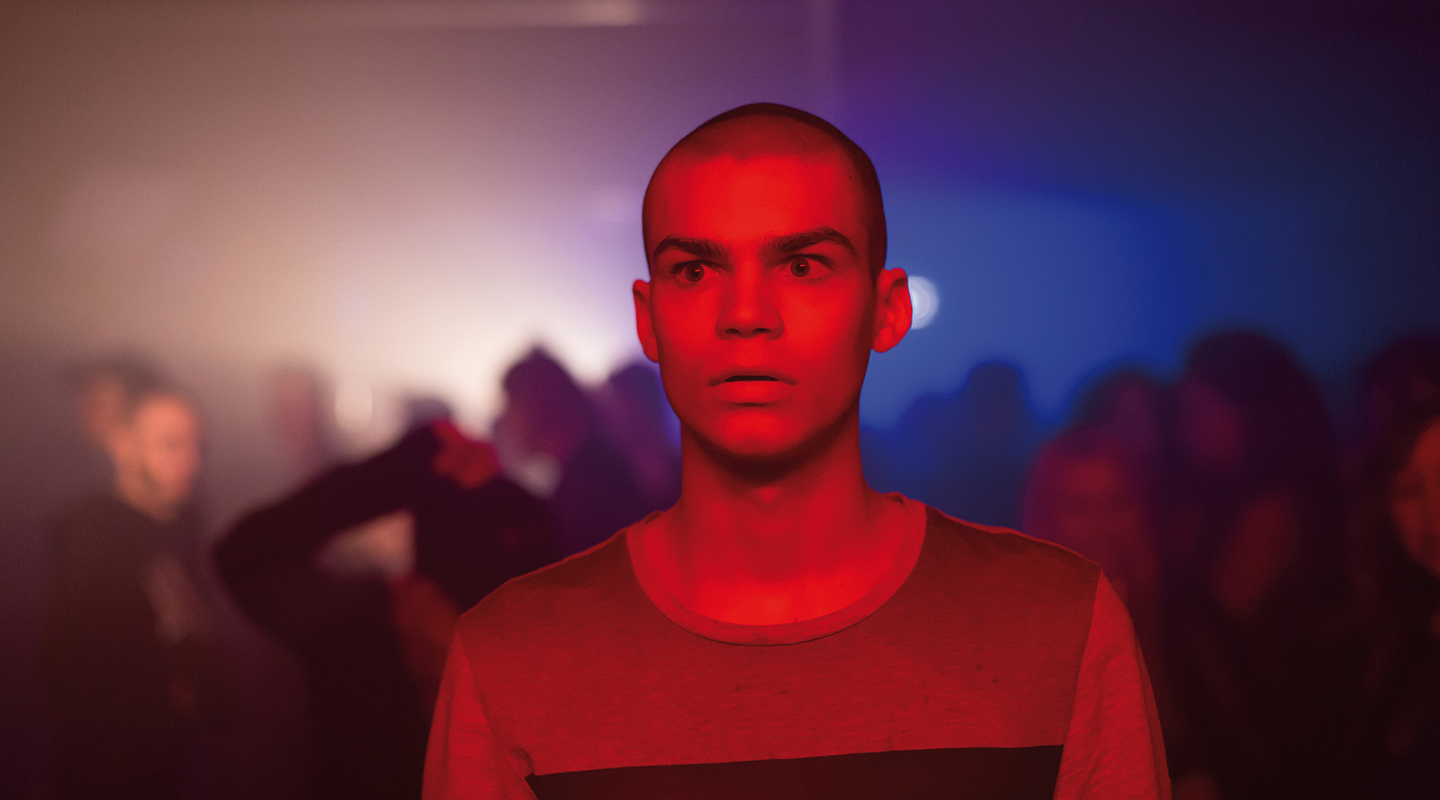 Jakob, the 17-year old hero of the foreboding Austrian drama Nevrland (★★☆☆☆), is gripped by a sense of fear and isolation. The timid teen lives with his stoic Father (Josef Hader) and ailing, elderly Grandfather (Wolfgang Hübsch), but feels alone — if he feels anything at all. In his mind, he’s set apart not only by the port-wine stain marking his chest, but by his burgeoning sexuality, which he can’t control or discuss with anyone. In the evenings, he watches TV with dad and grandpa, while at night he retreats to his room to watch porn and cruise a chat app, where he meets Kristjan (Paul Forman), a 26-year old American living in Vienna.

Timing definitely is on the side of this story of a sensitive queer youth, just graduated from high school, experiencing profound anxiety over his — and the world’s — uncertain future. Who could blame him? Writer-director Gregor Schmidinger, making his feature debut along with Simon Früwirth as Jakob, evokes an ominous mood of anxiety and uncertainty in rich widescreen compositions of the boy’s lonely room, and in the macho environment of the bloody slaughterhouse where his father works, and gets him a job for the summer. 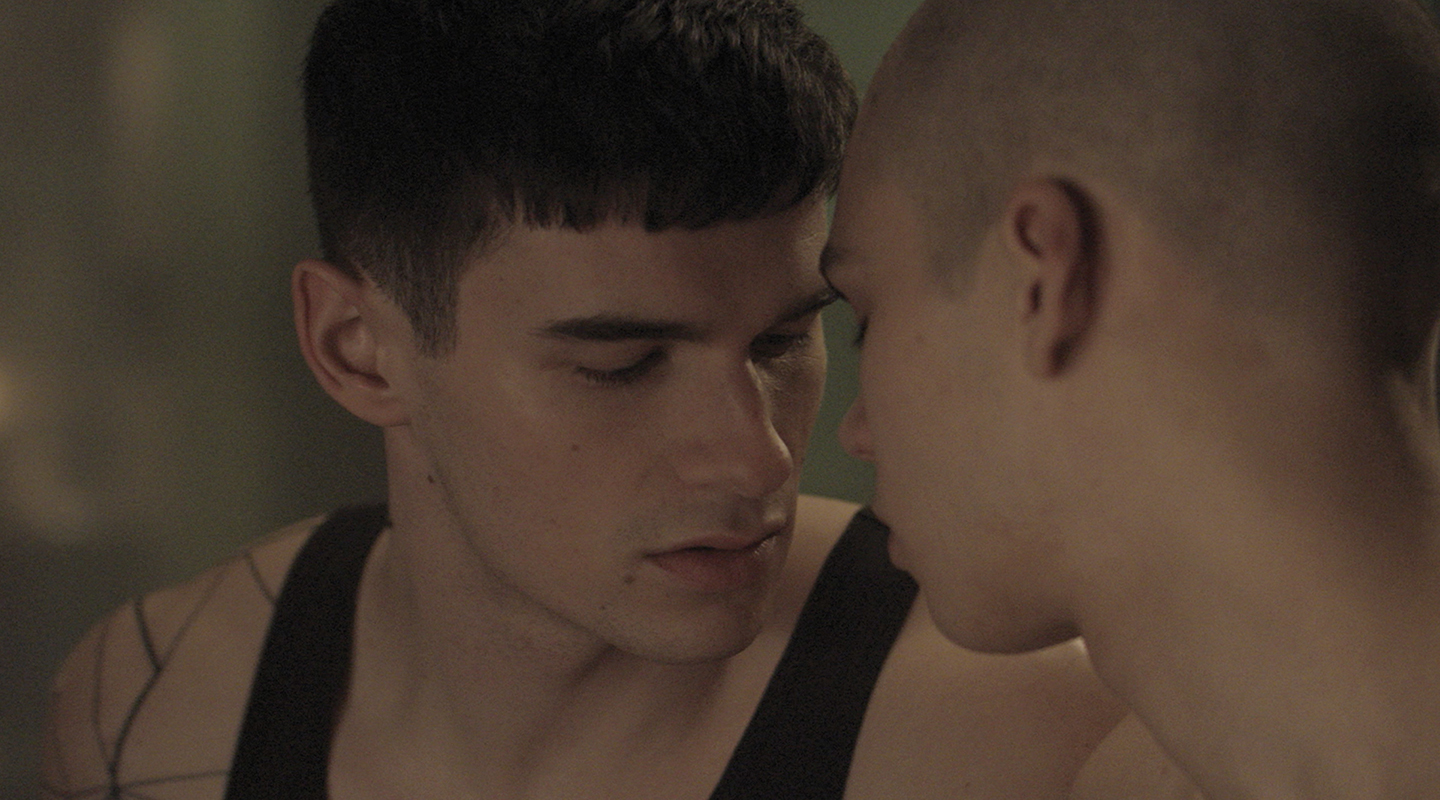 The meandering plot perks up at the slaughterhouse, as Jakob finds his angst exacerbated by jarring visions juxtaposing naked male flesh with fresh-killed hogs being carved into pieces. When Jakob’s father introduces pig-carving muscle daddy Murat (Anton Noori) to “show him the ropes” around the abattoir, the plot appears to really be perking up, but alas, the movie leaves Murat and his possibilities behind. Instead, Jakob pursues elusive online stranger Kristjan into the real world — but his chat buddy is hard to pin down. Throughout Jakob’s search for Kristjan, the movie teases a gossamer thread of mystery that doesn’t pay off. Eventually, the strangers meet.

Even mediated by screens, and screens within screens, Frühwirth and Forman create compelling chemistry in their sensual, English-language chats. That’s despite Forman’s wooden acting and lots of dead air, in addition to the dead pigs. The film also captures Jakob’s debilitating anxiety well enough to form the question ruling his life: “How can I be real if I don’t feel anything?” Jakob is not alone in questioning his purpose in the universe, but Kristjan seems a hollow vessel for whatever message of discovery he’s seeking. The more experienced American doesn’t go further than acknowledging Jakob’s confusion and offering substance-aided psychedelia as an answer. They talk art and philosophy, and sex comes into play, too, but the drug DMT plays a larger role in the film’s ponderous, strobe-lit climax. 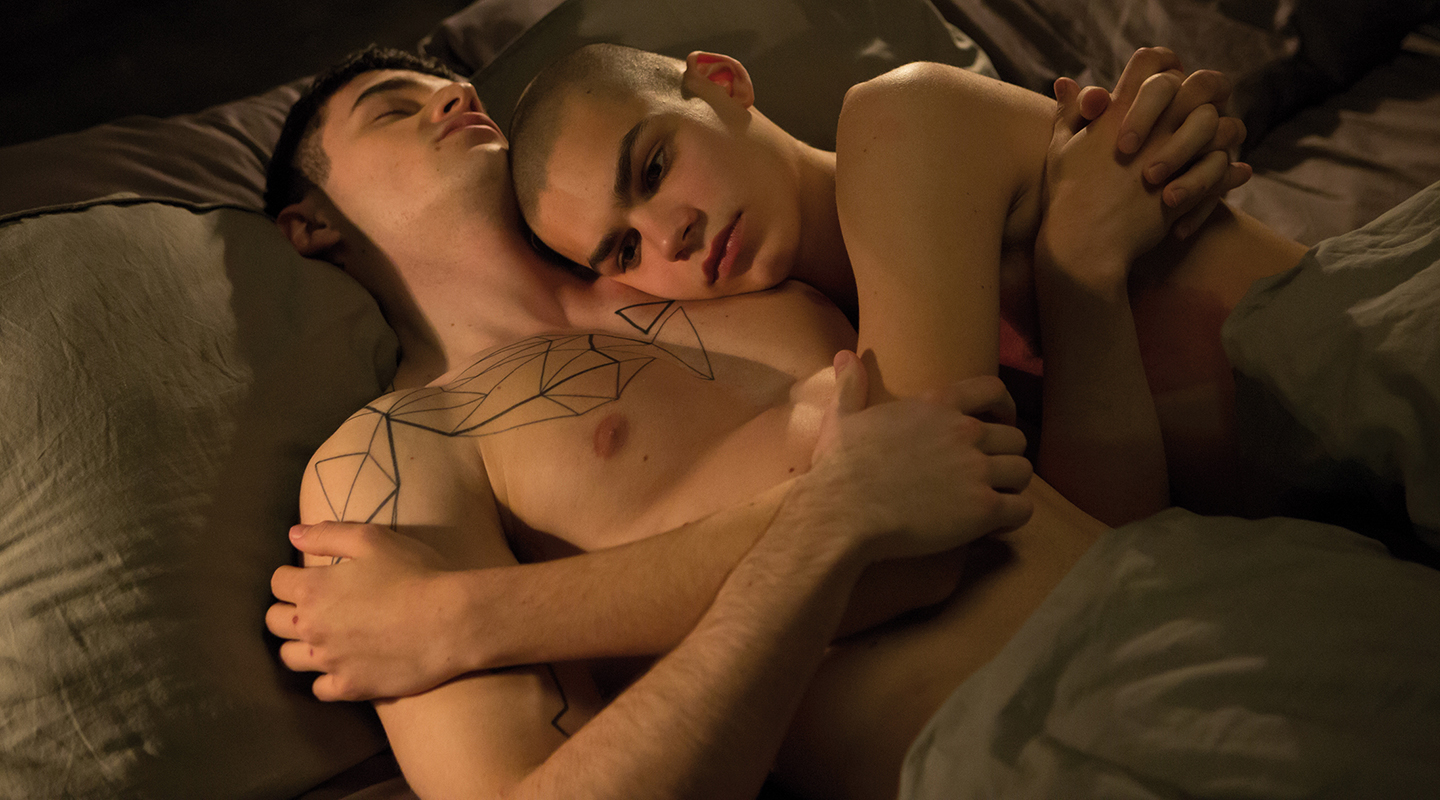 Ultimately, Nevrland settles on an extended trip to the Neverland of Jakob’s mind rather than developing an actual conclusion to his story. Aided by his powerful gaze, Frühwirth maintains a strong identification with the teen’s struggles, but his performance doesn’t noticeably progress from A to Z, or arrive anywhere eye-opening. And the film around him — dashed with half-hearted jump scares, several red herrings, and too many jump-cuts to pig carcasses — doesn’t emphatically stake a claim to what it wants to be. The dead animal visuals and pounding techno soundtrack call to mind Julia Ducournau’s 2016 flesh-eating tour-de-force Raw, but Nevrland never transmits its effects of suspense, horror, or post-millennial mindfuck with such persuasive confidence.

The film does tap into a mood that could reflect the current unsettled moment (despite the fact it was shot in 2018, and had its U.S. premiere at the 2019 Boston LGBT Film Festival). Schmidinger depicts a Vienna that seems largely deserted, or at least asleep, leaving the city a murky, private playground for just Kristjan, Jakob, and the denizens of the underground clubs Kristjan frequents. Jakob’s potential for human connection is sharply limited to home, work, and whatever chat room he can reach online. He might just as well be living under lockdown. And these days, his fear of what lies ahead of, or behind him, casts him more as an Everyman, than as the odd man out. Were his journey as captivating and complete as it is relatable, he might have served as the ideal avatar for a more or less captive audience of similarly disconnected souls.