By John Riley on April 8, 2020 @JohnAndresRiley 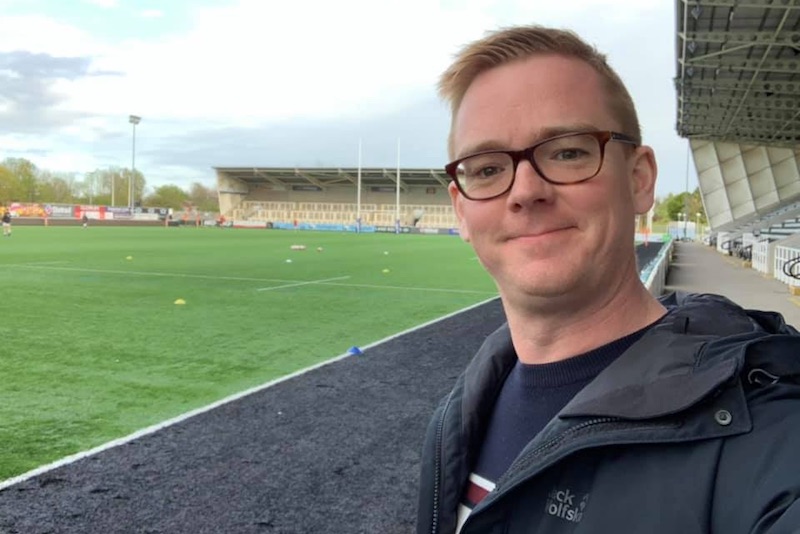 An openly gay British rugby commentator is trying his best to keep his announcing skills up to par, even as sporting events in the United Kingdom have been canceled due to the raging COVID-19 pandemic.

With no sports matches scheduled, Nick Heath, a commentator from the South London district of Tooting, has turned instead to narrating everyday activities of people practicing social distancing — everything from dog owners walking their beloved pets to pedestrians crossing a busy street.

The short videos, posted to his social media accounts, have garnered thousands of views and are being praised by his fellow countrymen for providing some cheer during a somber and uncertain time.

“The reaction’s been incredible, people seem to be wanting a moment of levity during these pretty unprecedented times,” Heath told CNN Sport.

“I’ve had hundreds, if not probably thousands of messages from people who are finding this time pretty difficult, whether they’re frontline key workers, health workers, people anxious about loved ones, and they’re just enjoying having a belly laugh about something very, very silly,” he added.

Heath, who had been slated to cover the Women’s Six Nations rugby tournament in February and March before the final rounds of the tournament were postponed due to the threat of COVID-19, says he takes pride in bringing joy to his fellow countrymen.

For instance, he was thanked and praised by a woman featured in a clip he posted showing a spaniel chasing a ball.

“She said she had what she thinks was the COVID-19 coronavirus, she’d been feeling rough for a few weeks and that was her first walk outside in that time with her dog,” he said, “and I happened to catch it and have a bit of fun with it and she said she loved it and it was the first time that she’d laughed in a good couple of weeks.”

While Heath isn’t the only broadcaster producing life commentary clips in lieu of sporting events, he has received financial support from some members of the public who appreciate his videos.

“I’ve seen my livelihood disappear before me … I said if you can spare the price of a beer or the price of a coffee then that would mean an awful lot,” he told CNN. “And a number of people have. While I was wondering where the income stream would be coming from, I have managed to get a few quid in and it might just help go towards the mortgage payments for a month or two.”

Prior to the COVID-19-related shutdowns, Heath had gained attention for responding to anti-gay comments made by Australian rugby player Israel Folau, who had said that various sinners, including “drunks, homosexuals, adulterers, liars, fornicators, thieves, atheists, [and] idolators” were going to hell. In response, Heath posted a video to Twitter in which he said: “There’s one on that list that isn’t a choice.”

“By putting homosexuality on this list, [Folau is] saying that being gay is a sin that you should repent for, and that ultimately is going to cause harm to hundreds of thousands of millions of people,” Heath said. “If you can’t see that, then I don’t even know where to start.”

As a gay rugby commentator, I’ve had enough of God-fearing athletes telling me I need to repent for my sins. 🏳️‍🌈 pic.twitter.com/vindiAUdBF

John Riley is the local news reporter for Metro Weekly. He can be reached at jriley@metroweekly.com
← Previous Story Hungary proposes revoking legal recognition of transgender people
Next Story → Netflix’s ‘Money Heist’ criticized for not casting trans actor in trans role